I hadn’t heard about Thanksgiving until I moved to Texas. Yet, I took my first shot at cooking the meal that cold fall of 1997 in the vast yellow plains of Dallas. Inspired by the glossy food magazines, cookbooks and TV shows, and wanting to immerse myself in the American experience, I baked, cooked and stirred while feeling homesick for my family’s home-cooking. It took years of living in the US for me to grasp the depth and warmth of the holiday and the menu, many failed turkeys and side dishes along the way.

It turns out, fifteen years later, the Thanksgiving feast has become such a relevant part of our lives that if we ever moved back to Mexico, I’d have to bring it back with us.

The connection wasn’t instantaneous. Slowly, some elements began to resonate within me. Take the bird: Turkey is an indigenous ingredient in Mexican cookery and a center piece for Christmas and the New Year. Both are holidays which also happen near the end of the year, during the coldest season, and have to do with gathering family and friends around a plentiful table. And being thankful. And hopeful.

Regardless of the many recommended takes on turkey I tried, it wasn’t until I came up with my own Mexican version (it’s in my new cookbook please get it!) that the Thanksgiving turkey felt like part of our home and our home grew deeper roots in the United States.

Now my Mexican turkey is part of the Thanksgiving menu, we eat every year with our same dear American friends, along with Debra’s butternut squash soup; Tamara’s fennel, pear and parmesan salad; Sean’s changing sides (as my turkey replaced his, he is finding his way on the sides territory – sorry Sean, but you’re the one who chose mine…); Viviana and Mario’s very berry sauce; and David’s chocolate pecan pie and home made ice creams.

This year, I have some sweet potato rounds with a punch to share. 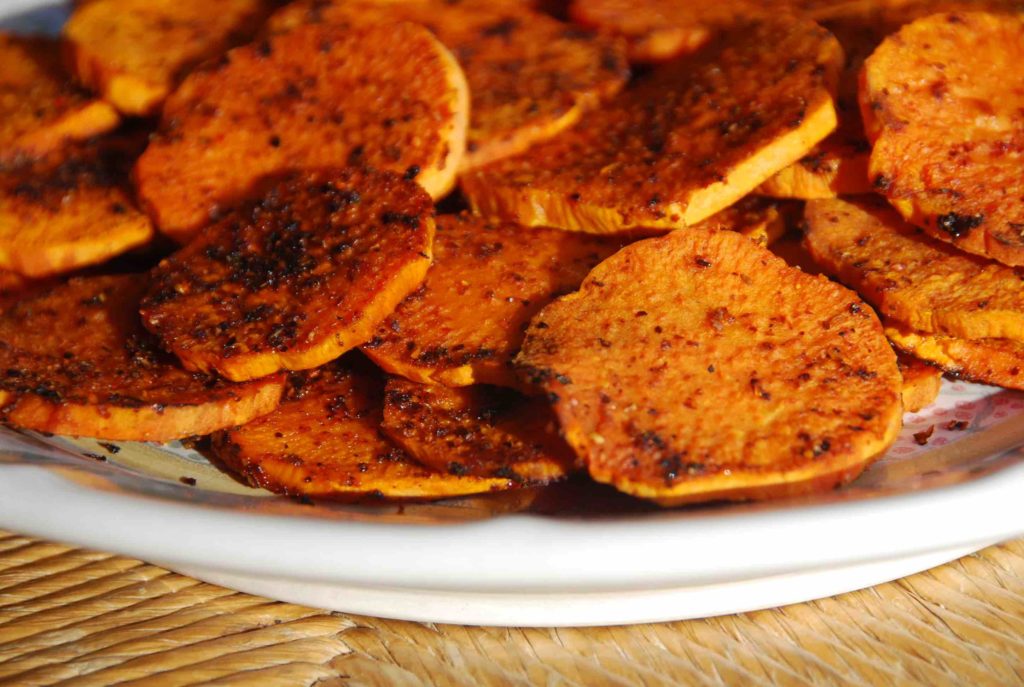 I realize the Thanksgiving menu has a permanent side to it: dishes that become part of it tend to be recurring for decades and very few get added or replaced along the way.

I envision these sweet potato rounds will have the same fate as my turkey: repeated appearances and a big chance of permanent status.

Just like turkey, sweet potatoes are so familiar to me. Called Camote in Spanish, from the náhuatl Camotli, they’ve been part of Mexico’s culinary lingo since pre-Hispanic times.

Mostly eaten cloaked in sugar or with a sweet spin, baked or roasted, they are culturally linked to the figure of the Camotero, a street vendor selling warm and soft sweet potatoes and plantains to order on a pushing cart, that moves around the city on cold evenings, turning people’s cravings on with the tune of its piercing whistle sound. 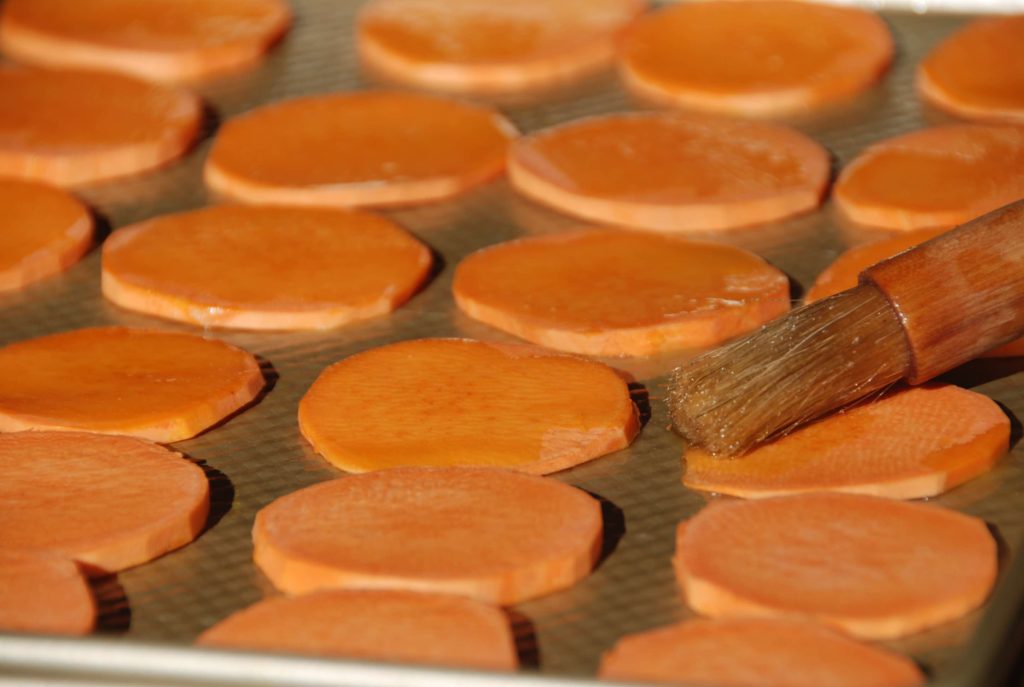 Here in the US, I’ve come up with a speedy, savory, irresistible take that can be a companion to whatever you may serve on your Thanksgiving table and will perk up the entire meal.

The best part: this will be a stress-free dish. It takes only four basic ingredients and it can be eaten warm, lukewarm or completely cooled.

Just slice the sweet potatoes into rounds, you can do that ahead of time. Brush them with a combination of melted unsalted butter and olive oil. Yes, please use both, it tastes so good, trust me. 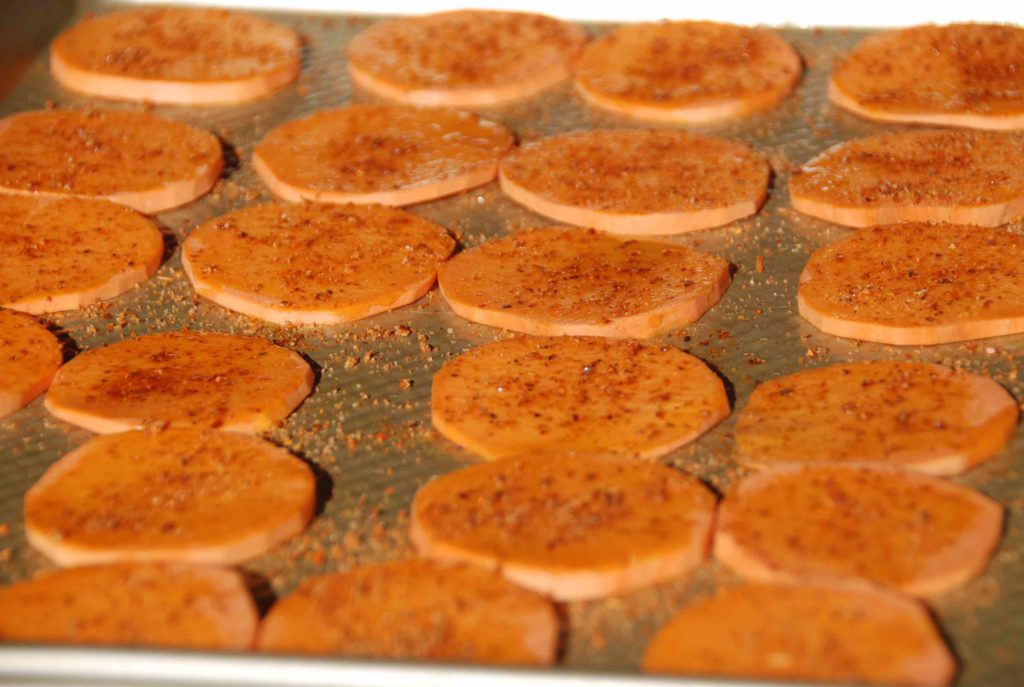 Generously sprinkle your favorite ground chile blend to cover on both sides.

The rounds will fly off of your platter, so bake plenty: they are thin and soft with a sweet bite on the inside, and lightly crispy on the outside with that lightly spicy, deliciously tart and barely salty seasoning. 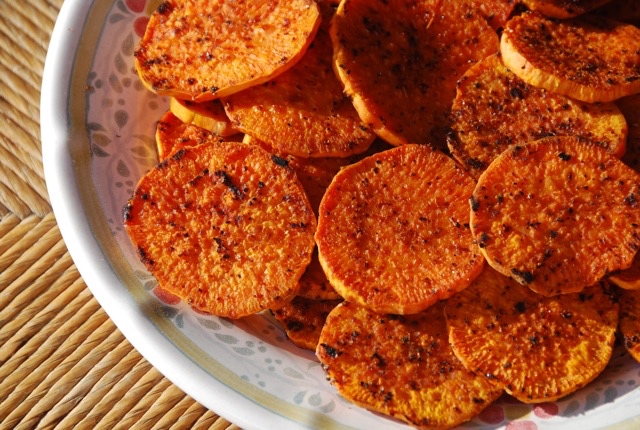 It is during Thanksgiving when I most realize how fully Mexican I can be in the United States, and how much the US has grown on me. And I feel immensely thankful.

Having come from Mexican grandparents who were once immigrants too, who made their home in Mexico, missing my Mexican parents and family, and now raising my Mexican-American family in the US… now I get it!

Just like so many people, I can’t be pigeonholed. And rather than feeling at a loss, I relish in the diversity of it all.

Wishing you a happy and plentiful Thanksgiving (with some punchy bites).

Sweet Potato Rounds with a Punch