Whenever it starts pouring down rain in late Spring, I hanker for huitlacoche.

A true Mexican delicacy, also called cuitlacoche, it is a form of fungus, similar to some mushrooms, that grows on fresh corn. In the Mexican rainy season, which starts in April (some say March…) and ends sometime in September (some say October…), you can find huitlacoche at its peak.

It doesn’t look that pretty. It grows in an oversize and disproportionate manner on ears of corn, producing huge kernels that are black inside and covered with a somewhat silvery-white, sparkly and velvet textured skin.

Its flavor is intense and unmatchable: mushroomy, earthy, woody, a bit inky… reminds me of calamari ink. 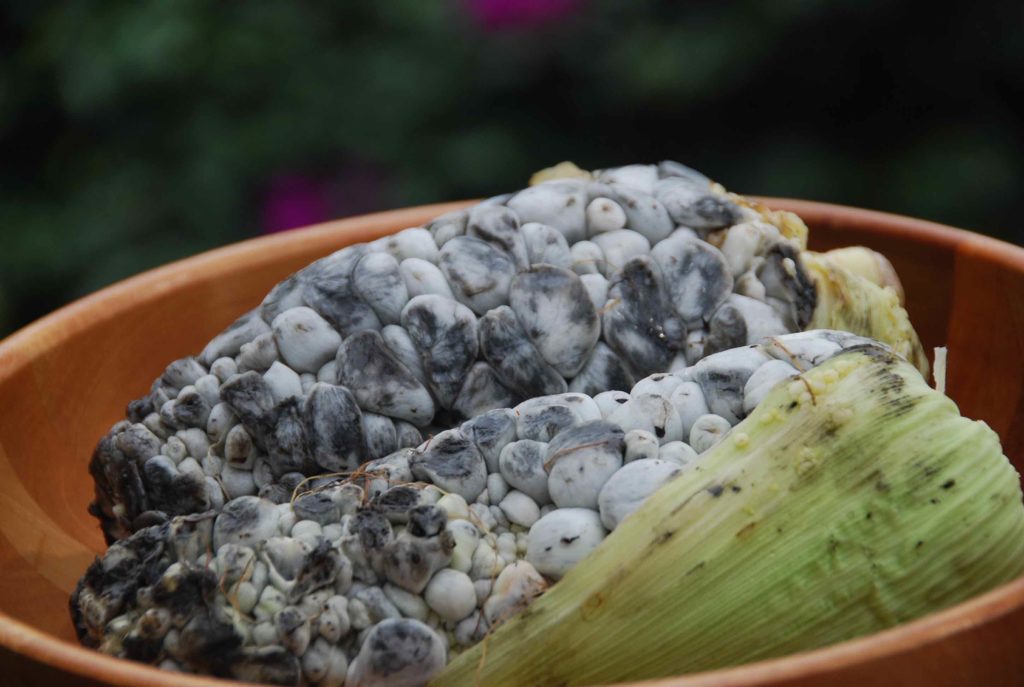 In Mexico, it was considered a treat long before the Spaniards arrived. Corn being such a sacred crop, anything that grows on it, especially as delicious, was considered a true gift from the Gods. You can find it throughout the country in the markets, and it costs more than your regular pieces of corn.

It is hard to find it fresh in the US as many farmers have considered it a pest, although restaurants, cooks and chefs are increasingly calling for it. Even the James Beard Foundation held a huitlacoche dinner in 1989 to try to familiarize Americans with it. They called it, the Mexican truffle…

If you can’t find it fresh, you can surely find it in cans of very good quality and also frozen. Go for it!

There is so much you can do with it: from soups, to taco and quesadilla fillings, savory rice, and stuffed in crepes, chicken and fish. Just to name some… I especially like it cooked with a bit of onion, jalapeño and epazote.