The very first class I taught at the Mexican Cultural Institute, after I switched from being a policy analyst at the Inter American Dialogue, was October 18, 2007.

I remember the date exactly, because it was a day after Sami’s 6th birthday. For months, I had been teaching him and his two brothers, Alan who was then 8 and Juju who was just 1, how to make sopes every night for at least 3 months.

I had been so nervous about teaching in front of a live audience that, instead of telling them our usual bed time story about an imaginary and mischievous monkey called Waba-Waba, I had switched to a nightly cooking demo. They were as loving and kind and patient as they are with me to this day, did not complain, and pretended to be making sopes along with me.

I started the classes at the Institute in an attempt to share my love for Mexican cuisine and culture and to try to open a much wider window into its richness, diversity and surprising accessibility. I wanted to help break misconceptions about our food and our people and invite people north of the border to make use of our ingredients, techniques and recipes to enrich their own kitchens.

The very first dish that I shared was sopes. I even found a photo of that day… and you can see Rosa and I showing how to make sopes many ways, with our hands, using a rolling pin, with a tortilla press… 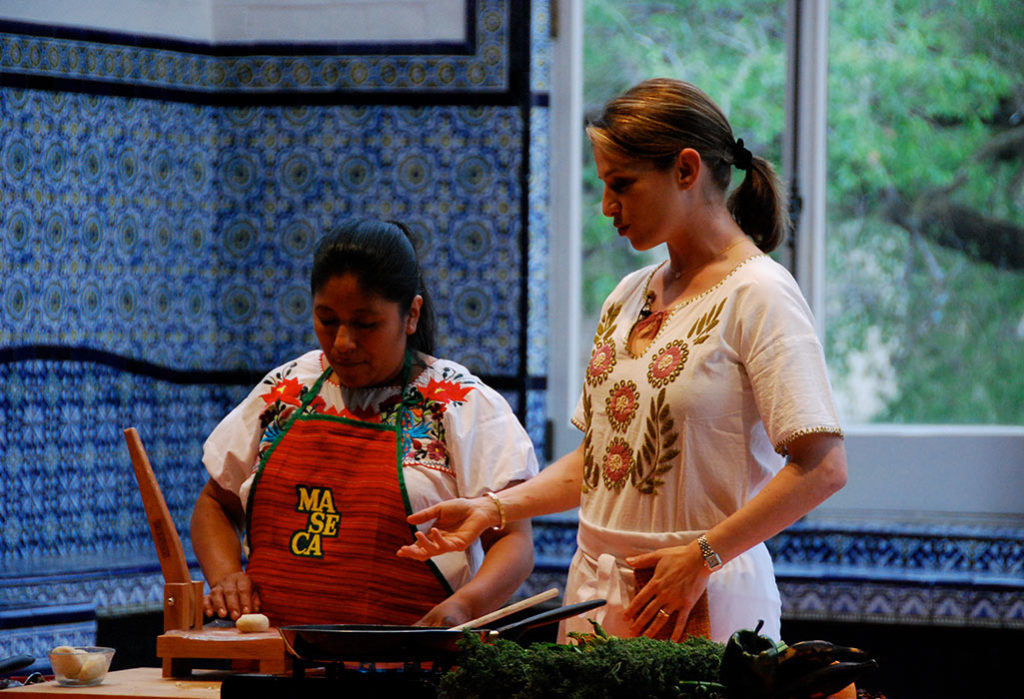 Why did I choose sopes? To begin with, because they are one of my favorite things to eat! But also, because sopes helped me shine a light on so many crucial elements of Mexican cuisine…

Sopes are part of a category of dishes we Mexicans call antojos, or antojitos, which translates to little cravings. An antojo is something you can eat anytime of day and can either be a quick bite or make a full meal, depending on what you top them with… and how many you eat.

Sopes are made of corn masa, which is a cornerstone of Mexican cuisine that has existed for thousands of years. Made of nixtamalized corn, corn masa renders corn nutritious and versatile. You don’t need to nixtamalize corn yourself, you can buy masa harina, which simply mixed with water makes masa!

Sopes show how playful and versatile masa can be. They are similar to a tortilla, but they are much thicker, and the rim around it that helps contain its garnishes. They are like little edible plates.

Sopes are easy to make. Different from a corn tortilla, someone who is making sopes for the first time, doesn’t need to worry about knowing how to use a tortilla press, the correct thickness, or the technique for making them puff up. They are much more forgiving.

Sopes are also accessible: you can make them ahead of time, vary the toppings, assemble in a few minutes, dress them up or dress them down. I always, always, add a layer of refried beans, a tasty salsa and either tangy, salty and crumbly queso cotija or queso fresco, crumbled on top.

To boot, sopes are super fun to make by yourself or with friends or with your kids.

So as you can see, sopes helped me achieve many things: they helped me show how accessible, forgiving, fun, filling, nutritious, versatile, rich and delicious Mexican food is.

To this day, I am still proudly teaching at the Institute where I am the resident chef 11 years after I started. I am also serving sopes any chance I get.

To make the Sopes:

To make the sopes:

Sopes Sopes recipe from Pati's Mexican Table Season 6, Episode 10 "How I Got to Now" To make the Sopes:2…