Last December, Daniel and I went to Yucatán. I was swept off my feet by the grandiose nature and history of the old Haciendas, but mostly by the uniqueness of the cuisine. It stands out from the rest of the country; with its aromatic, pungent, citrus flavors, charred and toasted ingredients and elements not found anywhere else.

Since at the Institute we established topics for the 2009 program in January and I left Yucatán as a December closing session, by the time class came around I was desperate to share these flavors. What a tortuous self imposed wait!

Of course Pollo Pibil had to be included, as it is one of the most loved dishes of the area. The rest of the menu was built around: Dzotobi-chay tamales, Mexican avocado soup, strained beans, a yellow rice, and old fashioned flan for dessert. 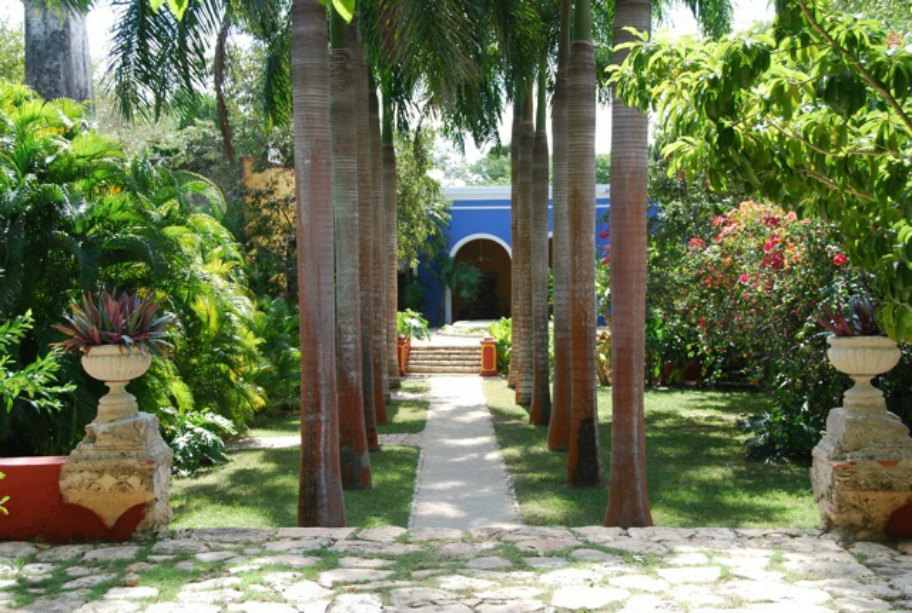 (One of the views inside of Hacienda San José)

Pollo Pibil is made with one of the pillars of Yucatecan cuisine, recado rojo or achiote paste,  which can now be found in many stores or online. If you walk into any market in Yucatán, you will see countless stands boasting colorful mountains of the main recados or pastes: black or chilmole, brown or de bistek, green or pepita and red or achiote.

The word Recado translates to message. In a way, each of the recados has a unique combination of ingredients, which makes a distinct bouillon of sorts, that translates a particular message of flavors into the dishes it is being used in.

They will sell you as much as you want... 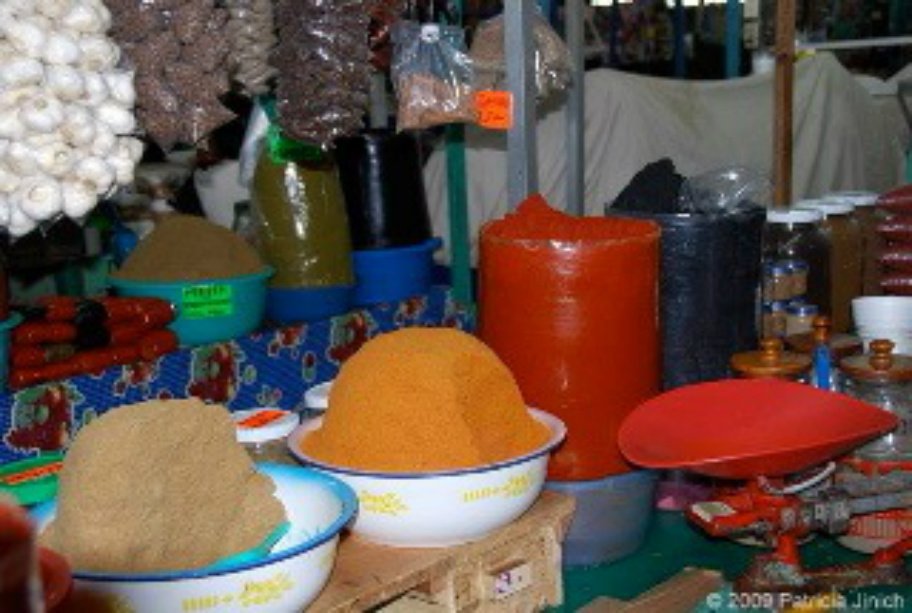 Or have it ready in previously measured bags… 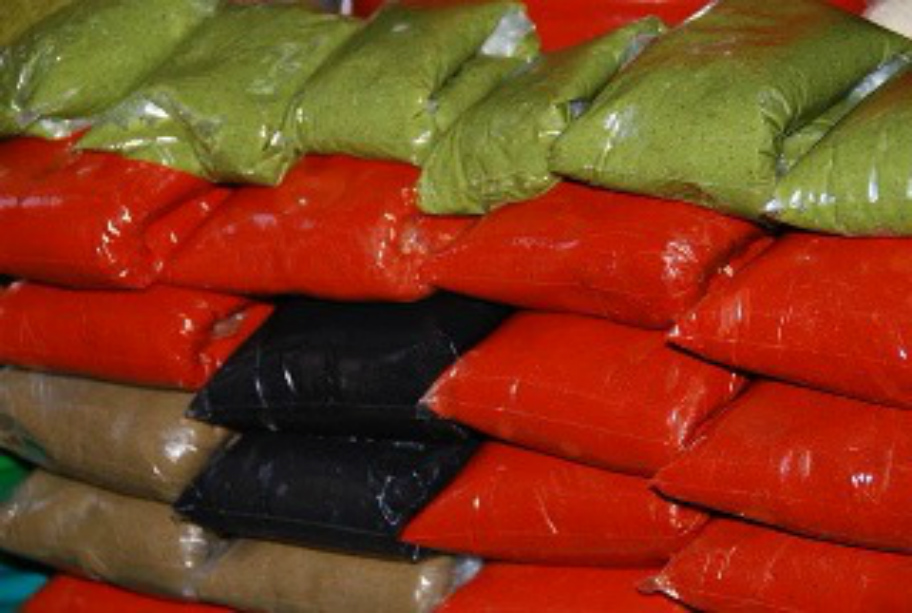 A couple of things distinguish anything cooked Pibil style…

First is the marinade. With achiote paste as a base, it has a rusty brick-like color and a pungent and sort of permanent flavor. That’s because of the achiote seeds it is made with. Then the paste is mixed with oregano, cumin, allspice, black pepper, salt and charred garlic; and diluted with bitter orange, which has a peculiar a flavor, quite different from regular oranges.

Since bitter orange can be hard to come by, many cooks have found substitutes such as a mix of orange juice and vinegar or a mix of different citrus juices. After testing for a while in my kitchen, I found the substitute I like the most to be equal parts of grapefruit, orange and lime juices and white distilled vinegar. The marinade is flavorful and aromatic and, as it has a high acidic content, it tenderizes the meat beautifully. 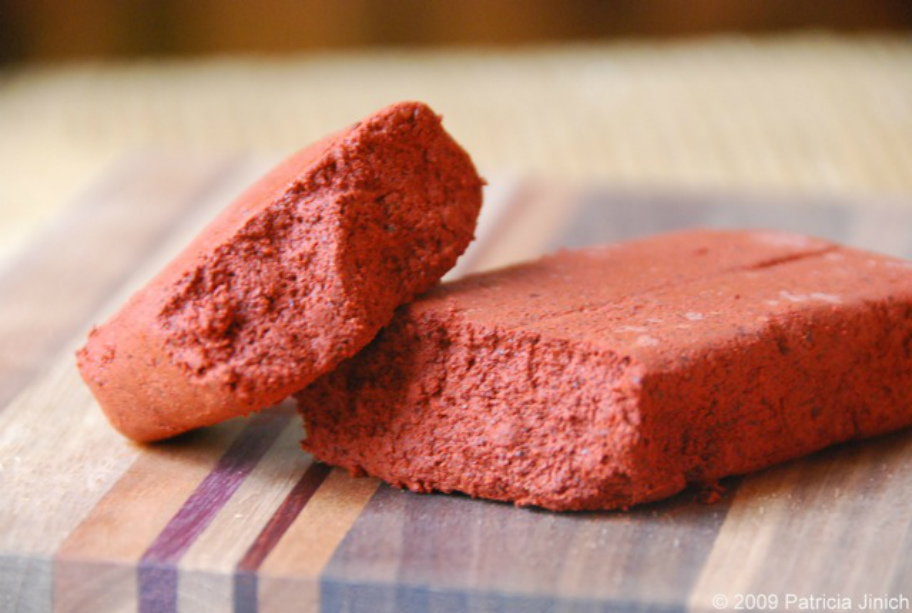 (A freshly opened bar of achiote paste, posing for my camera so you can take a look)

The second thing that distinguishes a Pibil is the cooking technique, which is what gave it its name. Traditionally, Pibil meats were marinated, wrapped in banana leaves and placed in “Pibs”: roasting pits buried underground layered with stones and pieces of wood. The “Pib” gave the dish a rustic, earthy and ashy feel while the banana leaves infused the meats with a grassy fragrant flavor and kept them moist.

Since it’s not likely that we are going to dig roasting pits on any given workday in our backyards anytime soon, many cooks have tried to find a method that can accomplish similar results.  Some wrap the chicken or meat in leaves and cook it in a steam bath in a large covered pot, while others do the same in the oven.  However, the dish becomes way too juicy and you are missing that earthy, roasted, ashy flavor.  When you cook in an earthen pit, although the chicken is wrapped, the excess moisture escapes through the pit, so the final dish is not that wet.

Here again, restless me, kept testing in the kitchen. And later then, very happy me, found a great and quick method to obtain similar results. First roast the chicken in the oven (detailed recipe below)  for that charred earthen flavor with the plus of nice browned skin and a thickening and seasoning of the marinade. Then bundle with banana leaves (if you have them) and/or aluminum foil to give it that final cooking that will make the meat come off the bones. 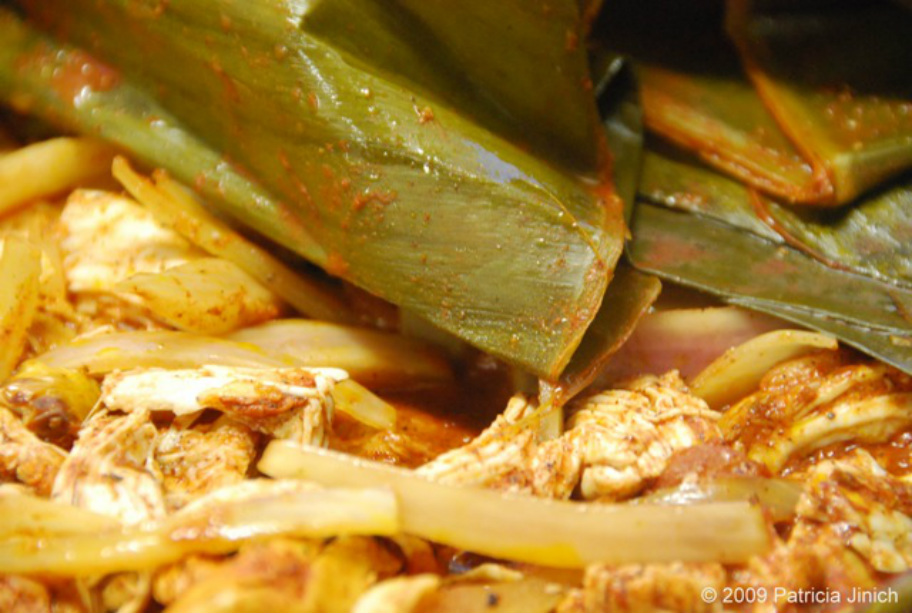 Chicken Pibil is an absolute hit paired with pickled red onions and a fiery and feisty habanero chile sauce. Yes, its spicy, but it is a welcome shock.

Oaxaca is a place I have been to countless times, but always leave wanting to go back.  No wonder I…