No matter how hard we tried we just couldn’t stay dry.

A single step out of the plane and it all seemed part of a magical realism novel from Gabriel Garcí­a Márquez. In that hot, humid and tropical pueblo, every move was slowed down in a permanent mist, which made my clothes feel damp. Under the open sunny sky, that mist was shiny and full of light as it transformed the colors from the exotic overgrown plants, colorful houses and small streets. There were cute little insects, bees and hummingbirds moving all around. Wide chubby trees offered some shade, as people walked by with no hurry, wearing earth colored hats.

And everything, absolutely everything, was infused with the lusciously sweet aroma of vanilla.

This is a true description of a small town in the region of Totonacapan in the state of Veracruz, where vanilla originated and is still heavily grown. Also where my husband and I were invited to a wedding, more than a decade ago. And it was in that small pueblo, where I tasted the best horchata I have ever tried.

Granted, memory has its ways of doing its own little thing. And granted, I was much younger and a complete newlywed, so probably more melodramatic. But I would bet this sweet, comforting, silky and refreshing horchata my hand is holding, that if I were there today my description would be just the same.

One could say I got lucky recently at a cooking demonstration and dinner for the Smithsonian. In small part by meticulous planning and in large part by chance, everyone there must have felt transported to Veracruz. Here’s why:

Son de Madera had just performed Son Jarocho music. The entire Mexican Cultural Institute was infused with the aroma of the vanilla beans and extract we had been cooking with all day, which was shipped from a company in that region to create the vanilla inspired menu. An unforeseen thunderstorm had left behind a wet ambiance. And to top it all off, in that hot summer evening, a couple air conditioning units decided to contribute to the programs’ authenticity and take a brake. 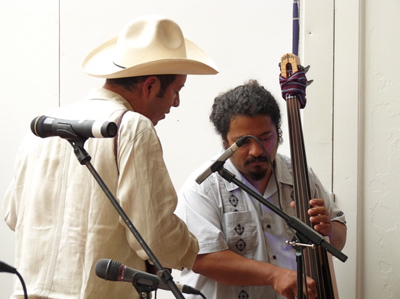 (Members from Son de Madera, getting ready for an outstanding performance)

As the 100 audience members listened to my description of the steamy pueblo, I kept wiping my forehead dry. I couldn’t help but laugh out loud in amazement: Indeed! It was tropical, hot and humid. All we were missing were the cute little insects, bees and hummingbirds.

It was a good thing that aside from wine and peanut Toritos, an original aperitif, we had big glass barrels filled with this cold homemade horchata. People could drink as much of it as their hearts pleased.

As it gets hotter as the summer advances, and we are not even near August, I am sharing the recipe with you too… It is very easy to make.

There are many versions of horchatas in Mexico. Some have a base of white rice while others use cantaloupe seeds. I prefer the former. But rice horchatas can be made in many ways. Some add condensed and/or evaporated milk. I add milk, which is more traditional, as well as vanilla extract and true cinnamon. And rather than grinding the rice first, I like to soak it for a couple hours before it is pureed and strained. It seems easier, and somehow, has more flavor. 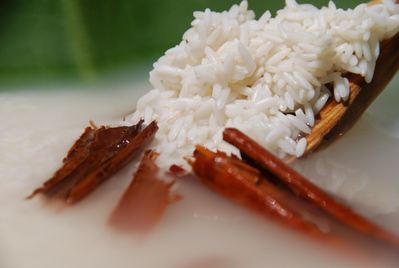 (Rice and cinnamon soaking in warm water, getting ready for an outstanding performance too!)

But the special spin of this horchata, which is not that common and makes it go from delicious to you can’t have anymore because I am finishing it all up, is coconut water. It makes it thirst quenching and energizing, as it brings you a couple steps closer to those tropical pueblos. Plus, it adds a soft layer of thickness without making it heavy.

There is always a shortcut to most things in the kitchen… If you don’t want to make horchata from scratch, you can find horchata concentrate in many stores or online. Just add coconut water as you mix the concentrate with water and/or milk. But if you have a bit of extra time to spare, try making it from scratch. I am sure you will enjoy it.

39comments inWe could all use a little Horchata…