Some Latin foods don’t need translating anymore. That is the case of churros. Crisp and golden on the outside, soft and almost moist in the center, and covered in a gritty mix of sugar and cinnamon. They have to be some of the most, if not the most, irresistible fritters.

Mexicans don’t get the credit for inventing them though. That battle is still disputed between the Portuguese and the Spanish. But we do owe the Spanish for helping churros find their way to our Mexican kitchens, where we have found a way to make them our very own. More than five centuries later, so rooted they have become, it is hard to find a town, small or large, that doesn’t sell them.

You can find churros being sold by street vendors in little paper bags, in baskets, or in stands that have a heating light to keep them warm – people tend to underestimate how chilly Mexican nights can get. But there are also churrerías, places that only sell churros and different kinds of hot chocolate to accompany them.

Then there are extra dipping sauces that, of late, have become fillings. Some industrial churro press machines pump out churros with an inner tunnel that can be filled with dulce de leche or cajeta, chocolate or fruit jams. I go for the traditionally plain ones, without the inner tunnel, with cajeta or dulce de leche on the side to dip as I please. 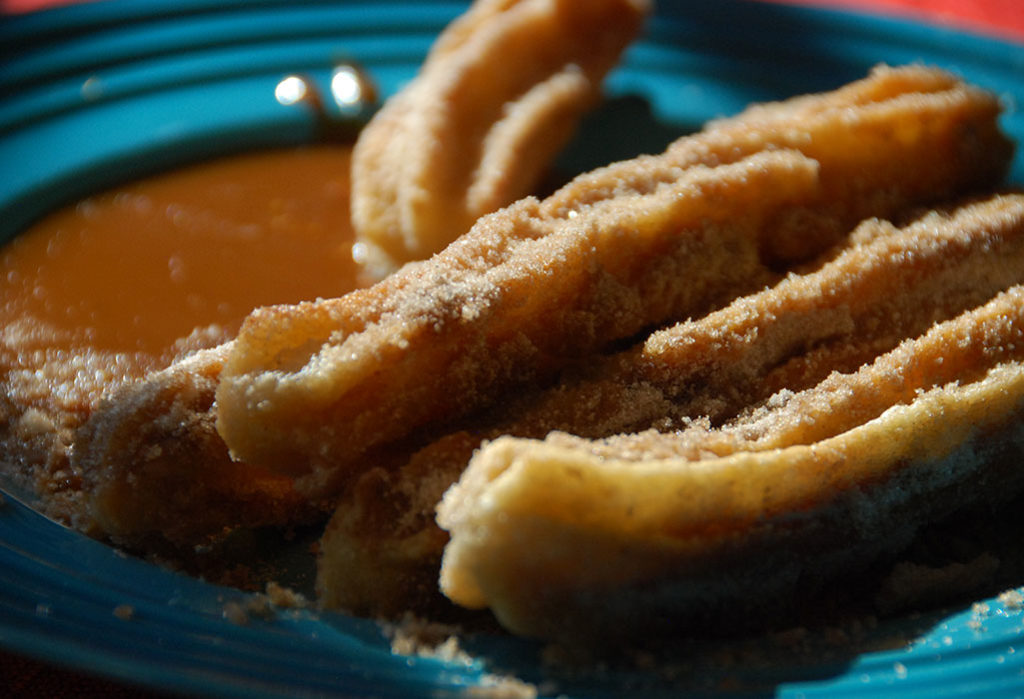 Just like other extremely popular street food goodies, many people have the misconception that something so good must be impossible to make at home. Well, wrong and wrong. All you need is a good recipe – and my boys and I did the legwork for you – and a churro-making tool.

On the recipe, it was a team effort. You know how many takes my boys sampled? The dough was too thick, then too sweet, then too crackly. Or once shaped into churros, it hardened too fast, its center dried too soon and the grooves didn’t stay smooth.

Finally, we nailed down the most irresistible and fool-proof one. With the recipe nailed down, the issue became the tool. As the perfect masa needs to be heavy and thick, it resists being pushed around in a cookie cutter or in a pastry bag. Ask my oldest son, he came to the kitchen to my rescue one too many times to help push the dough out from a cookie cutter press, we ended up breaking, and the pastry bag attempts were too much of a work out.

I finally caved. Though I am usually one to complain about stores trying to sell you special tools for certain cooking tasks, or for dealing with ingredients that do not require a special tool at all. Take the egg slicer, for example. Not only does it not work, it is messy and it does not make impeccable slices. Or the nutmeg grinder, nothing a normal grater can’t handle. I have to admit, the humble plastic churro press (less than $20 and many brands available online), is a great thing to have if you want fresh churros at home just about any afternoon.

Since the dough can be made in just a few minutes, you can have churros pressed and fried, seamlessly in less than a half hour.