There are so many ways that you can have and enjoy tortillas de harina at home. You can make them the traditional way, the fast-track-modern way (if you have an electric tortilla maker such as the REVEL…), or buy them ready made at the store. Different from corn tortillas, which rule Mexico’s south and are made with a base of nixtamalized corn, flour tortillas rule Mexico’s north and are wheat flour based. The latter also have an element of fat (either lard, vegetable shortening or oil) and are milder, sweeter and softer.

Sometimes both kinds of tortillas, flour and corn, work interchangeably for a dish, say cheese quesadillas or chicken tacos, and may depend on the preference of the eater. However, beware, there are other times when either the flour or corn tortilla should be the prime choice. Take Chilorio, it needs to be tucked in a flour tortilla. Yet any kind of enchiladas, enfrijoladas, or casserole must, REALLY MUST, be made with corn tortillas because they withhold the sauce much better than wheat flour ones, and sweetness may be uncalled for.

I have been surprised with how many requests I’ve received from people on how to make “good tasting,” “authentic homemade,” “white flour” tortillas, being both, that one can find them already made at the stores practically all over the US, and that it is time consuming. That, being said, the feel and taste of a homemade tortilla de harina does happen to be a galaxy away from a store bought one. So, if you can spare the time, and you like playing with your hands, give them a try.

As you will see, the trick is not only in the right amounts of ingredients, it’s also in the kneading and mostly in the cooking: don’t over cook them or they will lose ALL their appeal.

Of course, once you master the technique, you can flavor them with ingredients like fresh or dried chiles, tomatoes and even nopales. You can also experiment with making them using whole wheat flour. Though, I do prefer the plain, original taste. 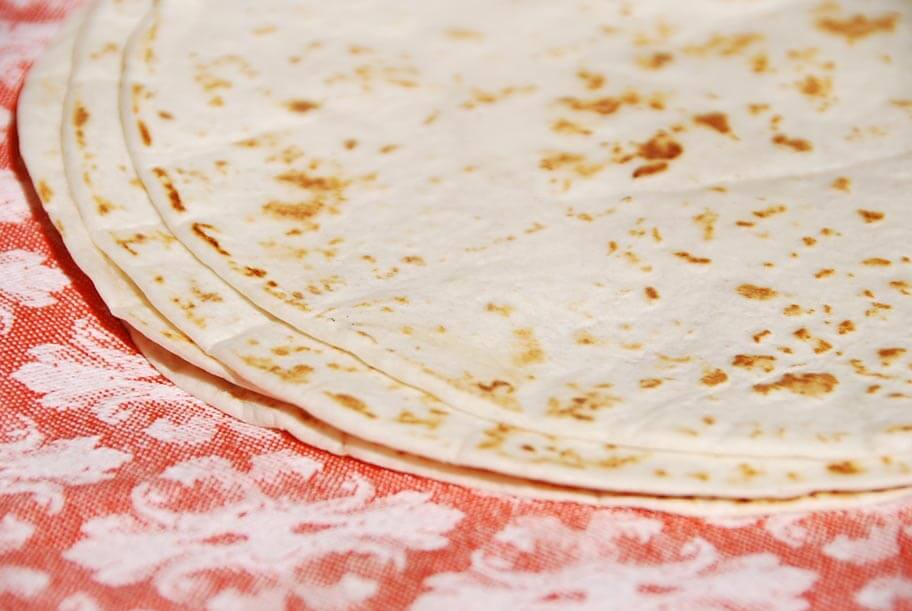 Huevos Divorciados A classic Mexican way of eating eggs, served sunny side up with salsa roja over one egg and…

Three-Cheese Chicken Enchiladas These enchiladas are typical of northern Mexico and use the region’s go-to red salsa, as well as…