For Labor Day, our friends Jeannie and Bill invited us to their farm on the Eastern shore. Jeannie said snacks and grown up drinks are welcome. We can’t wait! Since we are going to be a large crowd, meals there are so leisurely and her family likes to try new things, I want to bring an interesting and friendly snack. Since I’ve been experimenting with pumpkin seeds, spiced up pumpkin seeds came to mind. Micheladas are a great pairing for them, especially since this may be one of the last weekends with enough heat for such drink.

Pumpkin seeds, Pepitas in Spanish, are one of the things I used to stuff in my suitcase when visiting Mexico. That’s because they have a mellow, somewhat nutty, almost sweet, barely chewy and nutritious nature, but also because of its multiple uses in Mexican cooking. They are used hulled and un-hulled, toasted or fried, to make salsas, moles, soups and drinks. There is more to Pepitas than being used for an unnoticeable role as a salad topping. So you can imagine my happiness when I began noticing their appearance in not just one, but many grocery stores here in the US. 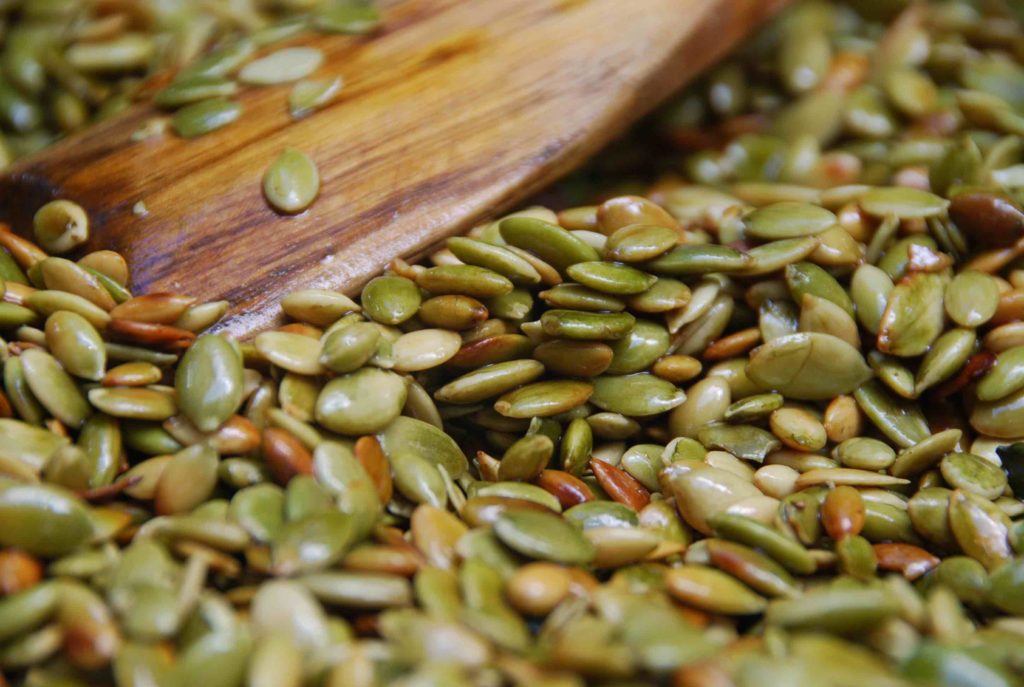 (Pepitas gently frying in my pan, popping and changing from an olive green to a light brown toasted color)

Pepitas are also a craved for snack for many Mexicans, including myself, when going to the movies. Un-hulled, soaked in salted water, dried and toasted, they are sold in little packages in street stands and bring long-lasting entertainment. It takes a couple hours to go through a small bag, as you place one by one between your teeth to crack the salted shell open and then triumphantly pop the hidden and gentle tasting Pepita into your mouth. You get the pleasure of repeating that again and again throughout the ups and downs of the film.

However, one of my favorite ways to eat Pepitas is hulled, toasted or lightly fried and tossed with ground dried Chile Piquí­n (which can be bought ready to use), salt and sugar. It takes five minutes to make this tasty crunchy nibble. If you make plenty, there is extra to use, not for an unnoticeable role but for a stellar one, on top of salads or fish. The mix of chile, salt and sugar makes them come alive in your mouth.

As for the Michelada, it is the ultimate Mexican way to drink beer. Beer purists: do not fear, you will like what you try. Non-beer drinkers: You will love beer this way.

Classic Michelada is made by pouring beer onto a cold or frozen glass mug with a salted rim (previously rubbed with lime) and freshly squeezed lime juice at the bottom. Some people add ice, some people don’t. For the more playful Michelada, a combination of salty ingredients (such as Maggi and Worcestershire sauces) and spicy ones (Tabasco, Valentina, Cholula, or any spicy sauce) are added before pouring the beer.

There is no agreement as to how to pour the beer. I make mine with lime juice, some dashes of Maggi, Worcestershire and Valentina, and pour the beer up to the salted rim. That way I can taste a bit of the salt around the rim with each sip. Some people pour the beer quickly so it goes over the rim and bubbles up with the salt so that the volcano explodes over their hands, and then they drink the top of the delicious disaster and everything is already mixed up (!)

Here are the super easy recipes for the Pepitas and the Micheladas… why work hard on Labor Day?

11comments inMicheladas and Spiced Up Pepitas: You Are Invited!