I have a thing for soups.

Doesn’t matter what time of day, what season of the year, what place I’m in, if I want tasty comfort my entire self craves a big bowl of soup.

As far as soups go, I have concocted some, I religiously repeat some I grew up eating, and then there are others I’ve become enamored with as I’ve ventured deeper into my home country’s cuisine.

As soon as my feet touch new territory, I search for its signature soup: the one everyone knows; the one everyone loves; the one present at every home kitchen. As easy as it may sound, sometimes those soups stir away from restaurants. Luckily, the first meal we had during our trip to Chiapas included that soup. 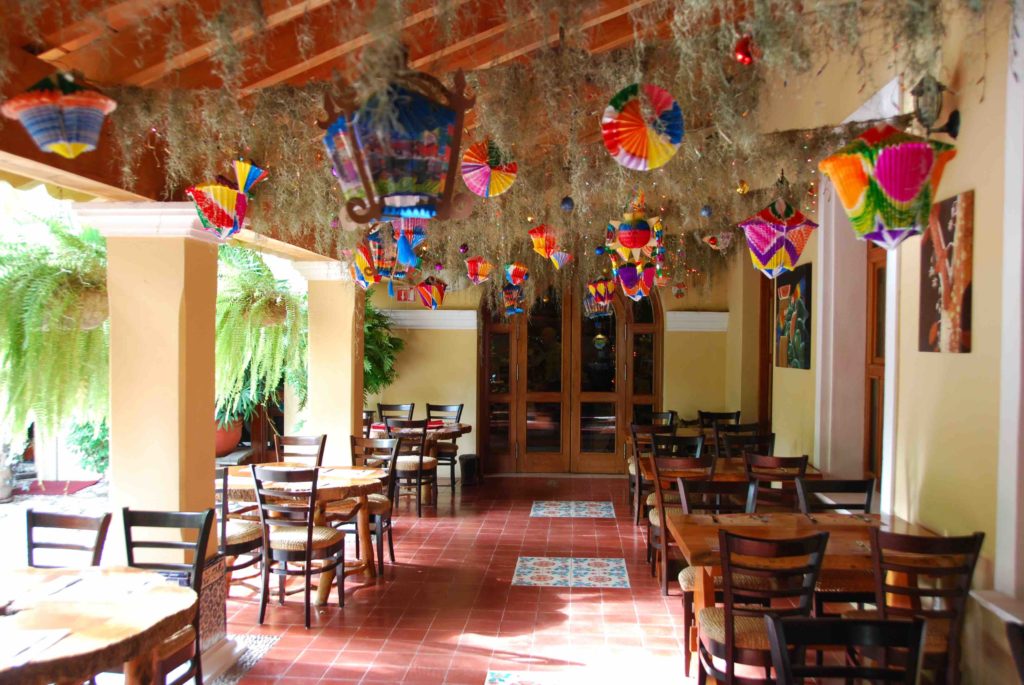 It was at a touristy restaurant serving a regional specialties buffet. The broth was thick and brimming with Chipilí­n, an herb with a grassy taste (like a mellow version of spinach or a gentle variation of watercress) and a silky delicate bite. The best part of the soup was the corn masa dumplings, dfferent from other I’ve tried, these had queso fresco mixed in the masa or dough, resulting in fluffier balls with a deep soft bite.

A couple days later, I bought a big bowl of Chipilí­n soup at a small fonda in Chamula. I sat on the sidewalk and ate it as I watched the church procession pass by.

The Church of San Juan Chamula is one of Mexico’s most famous: probably the most controversial as well, for its wildly eclectic combination of indigenous, pagan and Catholic rituals. Not to mention it’s particular architecture and decorations.

This second version of the soup was lighter, yet it had much more color, like the doors in the photo above. A bit of tomato spiked the broth and I tasted a bit of green heat. Don’t ask me why it didn’t occur to me to take a photo of the soup. Instead, I took photos of the Señores below. 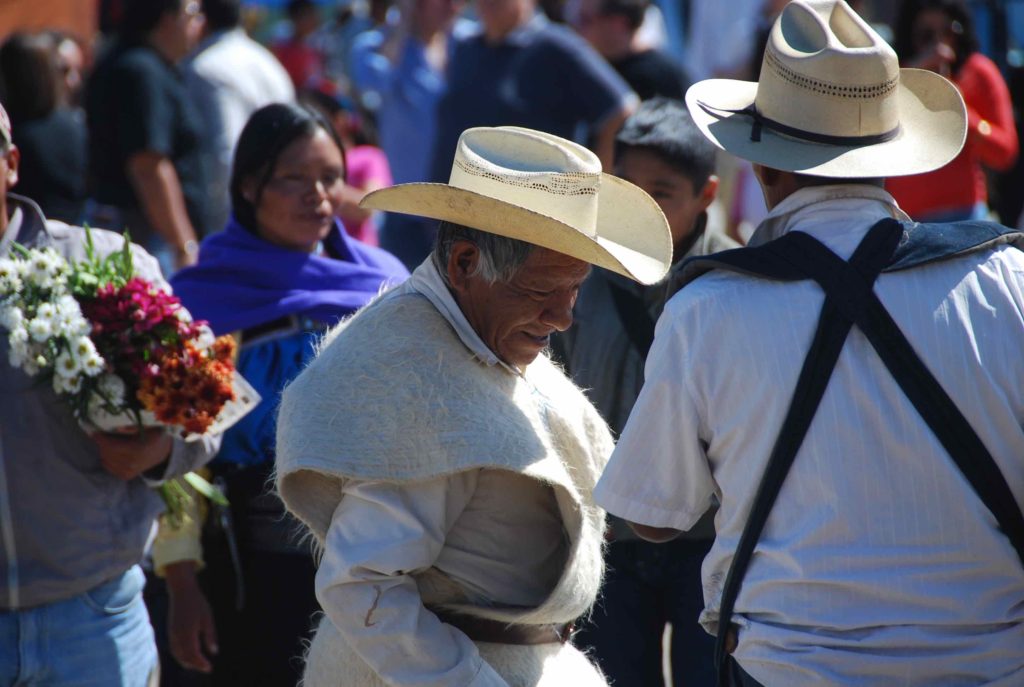 Tzotzil Mayas, which form part of one of the twelve indigenous groups that live in this state, were getting ready to walk in the procession, with their unique attire made with goatskin. Some men wear black, some wear white…and the women make skirts in the same style.

If you have never heard “Tzotzil”, a Maya language, you have missed listening to one of the sweetest sounds. As delicate as those Chipilí­n leaves… 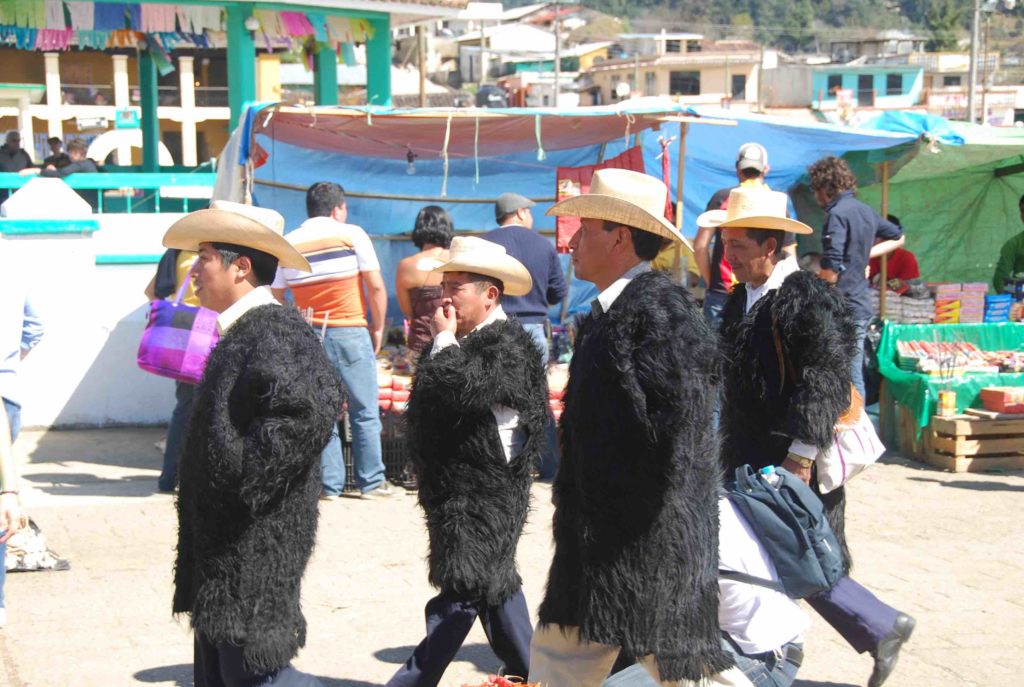 Ok, back to the soup. That same day, I tried a third version.

A short ride away we landed in a restaurant with a sumptuous buffet that was different from the first. This one boasted a larger display of typical dishes from the region. Their Chipilí­n soup had a much clearer broth, as if the masa dumplings had been cooked separately from the final soup and incorporated in the end. It had less Chipilí­n leaves in the broth, making it look more elegant and light, and there was queso fresco to add as a garnish, as well as Mexican crema and small pieces of chicharrón. 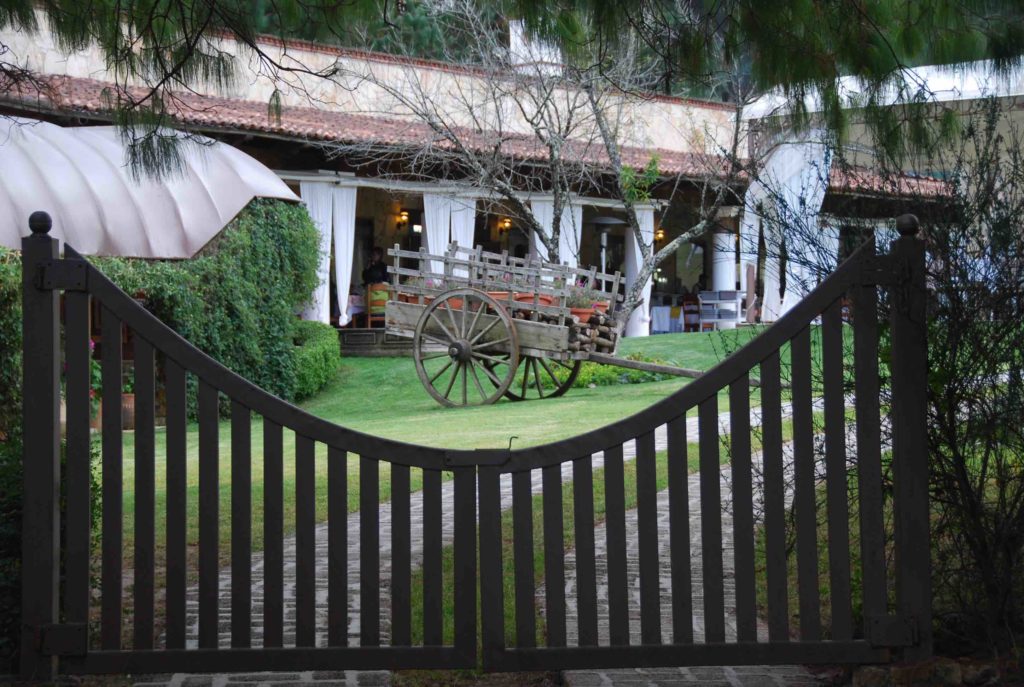 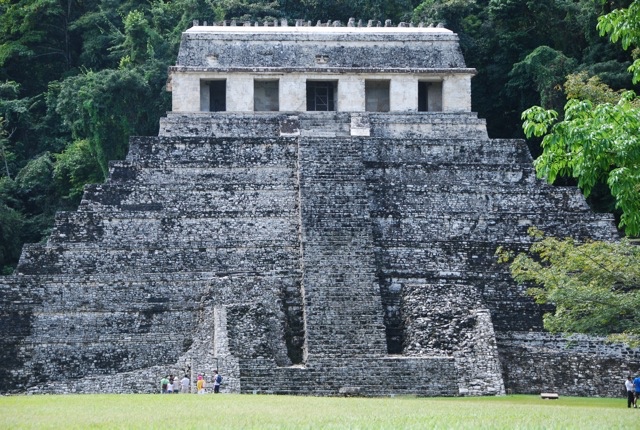 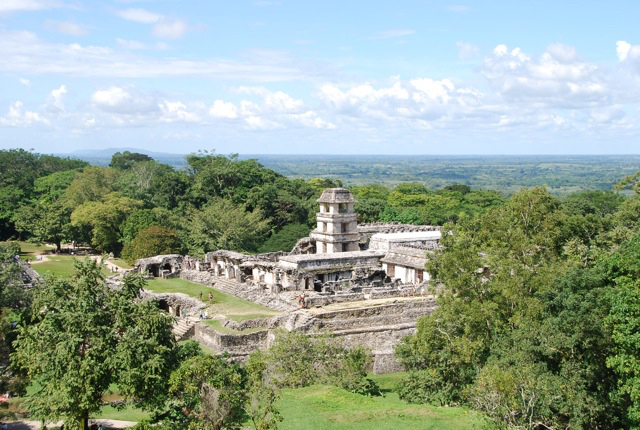 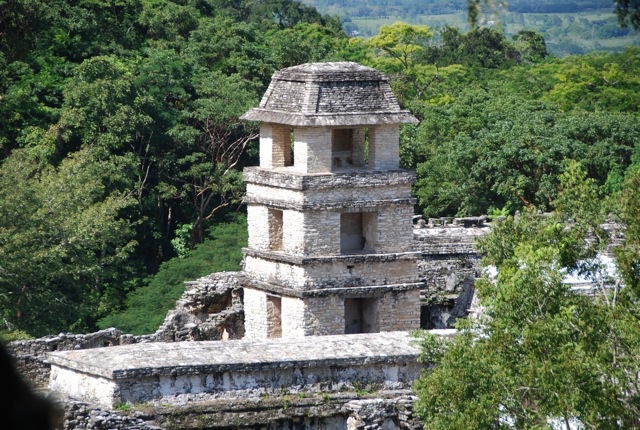 Alright, back to the soup. This one had the smallest of masa balls, and different than the soups before, aside from having Chipilí­n in the broth, there was a generous amount of Chipilí­n chopped into the masa balls. It also had extra garnishes of more queso fresco and thick Mexican cream. But no chicharrón.

I did think about other things than trying more versions of the Chipilí­n soup and other foods I had no idea existed (which I will write about in other blog posts). Especially when we had the chance to learn about the insanely gorgeous textiles made in Chiapas… 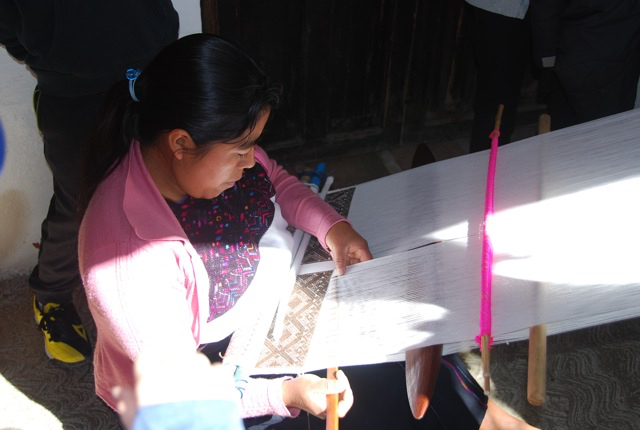 Once at San Cristobal de las Casas, I tried one last version of the soup in one of the restaurants in that busy street below. This soup included corn kernels in the broth. The contrast of that sweet crunch next to the soft masa balls in the flavored broth worked so well! 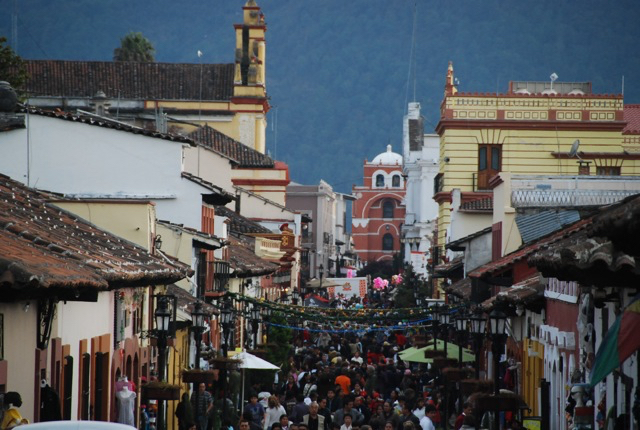 No. I did not take a photo of it, because I didn’t know I was going to write about all the Chipilí­n soups I tried in Chiapas! Of course now I wish I had.

The good thing is that here is a recipe for you to try the soup.

You can find Chipilí­n in the US these days, especially in Latin markets in the Summer and Fall. I just found some at Panam market in DC.

It looks like this. It is so pretty I put a big bunch in a flower vase and admired it as I ate it away and the bunch kept getting thinner. 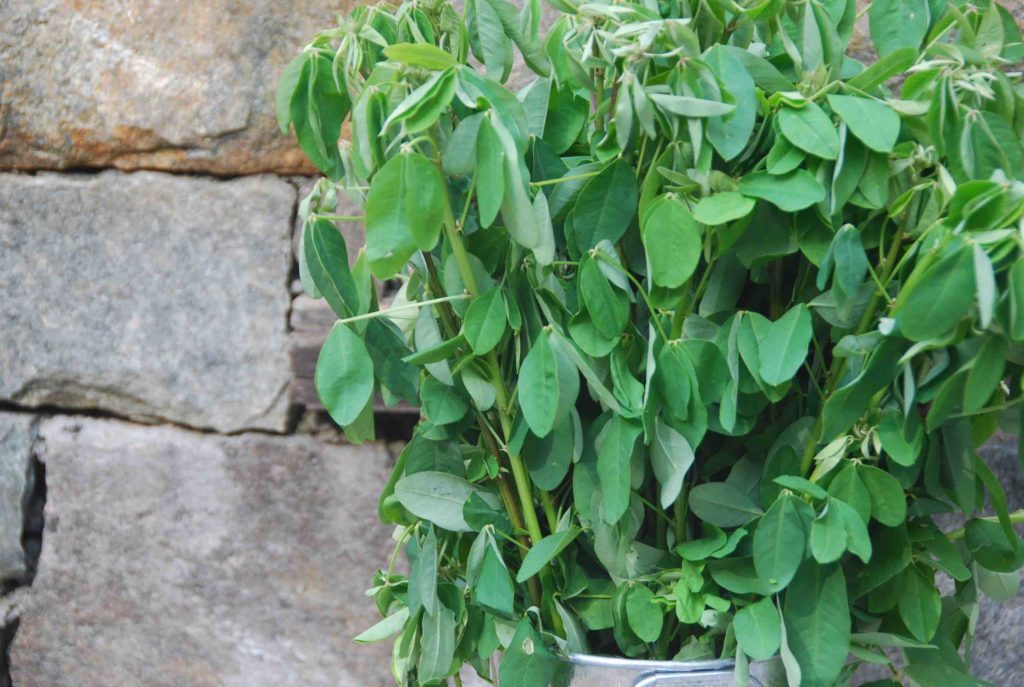 Here is a close up, so you can see just how delicate the leaves are… 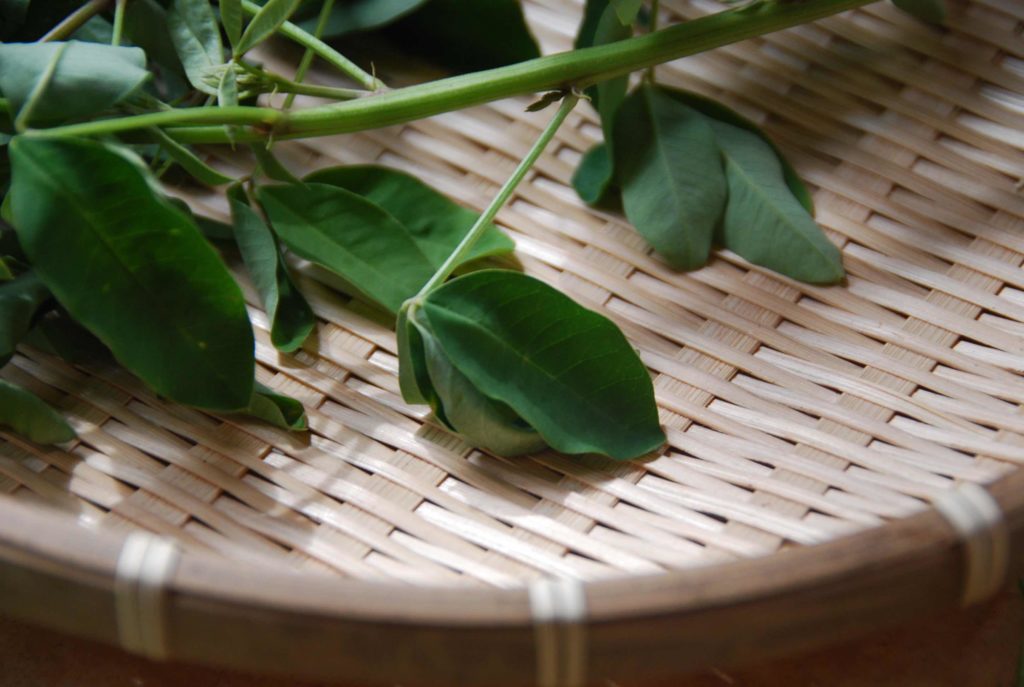 If you can’t find it, you can substitute it with sliced baby spinach or watercress.

The recipe I am giving you here, was tested in my kitchen until I nailed down all the elements I enjoyed in the different versions: fluffy masa balls flavored with cheese, an abundance of Chipilí­n leaves in the broth but not in the masa balls, sweet crunchy corn seasoned along with the onion that makes the base of the soup, and cooking the masa balls in the soup so that as they cook, they thicken the broth. I find that extra thick broth to be irresisitible. It almost resembles atole or a very light porridge (in a good way).

Just like Chiapas is not so well known outside of Mexico, it’s cuisine remains to be enjoyed abroad. This soup has many of the features I recognized in the different meals I ate there: distinct, with a lot personality, yet at the same time homey, delicate and comforting. Thankfully, many of the ingredients used in Chiapas, are now accessible abroad too. 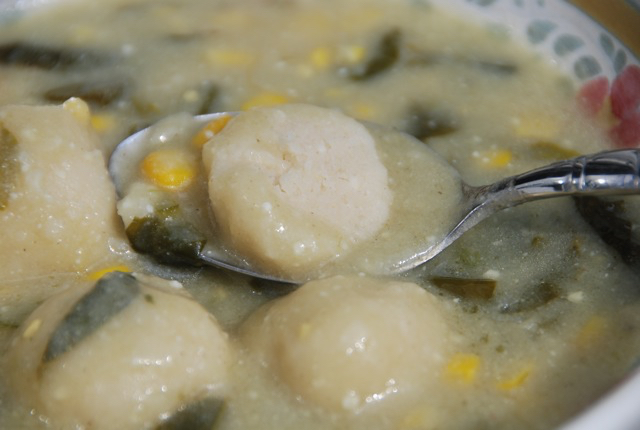 A good soup recipe, I’ve learned, always comes in handy. Especially if it takes you somewhere. This one takes me right back to Chiapas.