With a soft, crumbly and almost sweet dough that embraces a moist, tasty and meaty filling, it is hard not to eat one after the other. These Empanadas do have a curious name though. Especially when you consider their addicting nature.

I didn’t choose their name. No.The nuns from the Mexican Convent of our Lady of the Immaculate Conception are to blame.It all began with Beatriz da Silva, the Portuguese woman who founded the order in Toledo, Spain.

Known to be shockingly beautiful, although destined to be the companion to Queen Isabel from Spain, she was locked up because of the Queen’s jealousy and alleged admiration from the King. Legend goes, that when Beatriz managed to flee, she was more beautiful and had a new found strength she used to establish a new Conceptionist order.The three Conceptionist nuns who arrived in Mexico City around the 1540’s, were also known to be strong. If not as pretty.

Aside from trying to evangelize the population, they combined Spanish and Mexican ingredients in their kitchens, as most Spanish nuns, with an intense passion and a ton of imagination. As most Spanish nuns, as well, their cooking instincts were led by an insatiable sweet tooth. That may explain the sweet elements both in the dough and the filling of these Empanadas, that were served time and again to entertain guests in this convent.And now you know, where the name comes from… 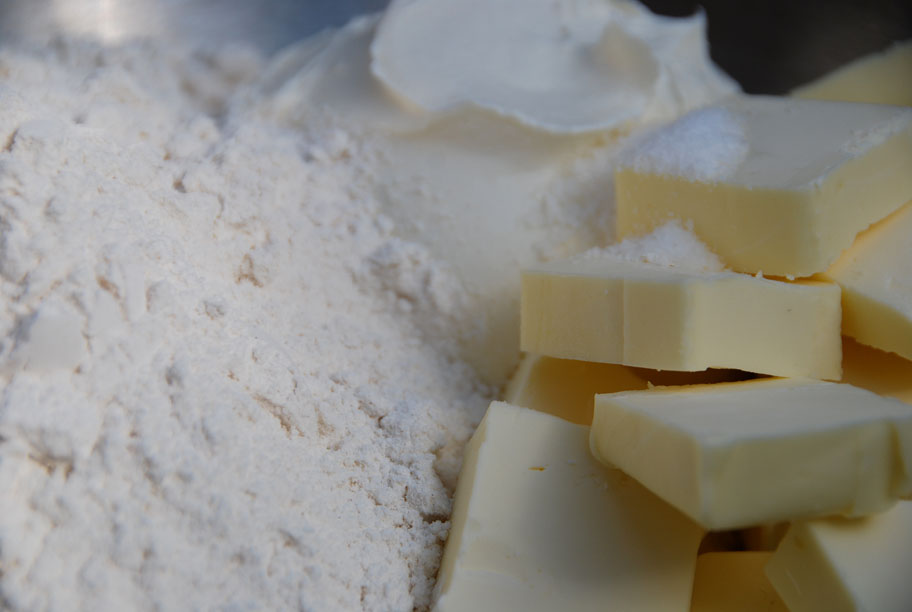 The dough can be used both for sweet or savory Empanadas. As its sweetness is so mild, it enhances the flavors in savory fillings, such as the Meat Picadillo in this one, and it dances along sweet dessert ones.

It can be made in a snap by mixing cream cheese, butter, all purpose flour and a pinch of salt in the mixer. Or by hand. 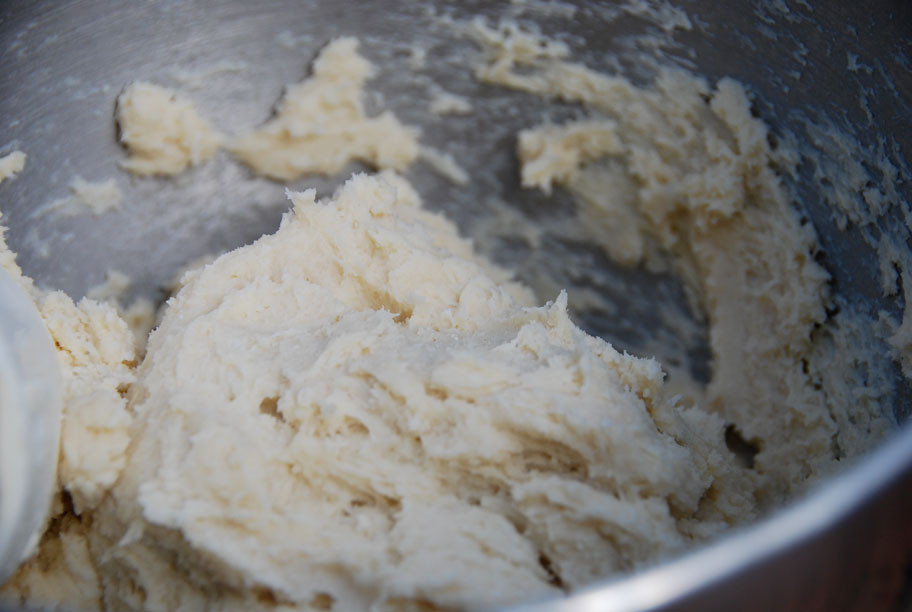 It was originally made with Nata instead of Cream Cheese. Nata, which is a thin layer formed after boiling fresh raw milk, and found throughout Mexico in Haciendas and Ranchos, is sweet, extremely white and thick.

And oh so irresistible.

If you have access to Nata, use it instead of Cream Cheese, as those pioneer Conceptionist nuns did. But truth is, many nuns use Cream Cheese these days too…

The dough is malleable and soft. Juju made one batch with his hands. Proud monster. 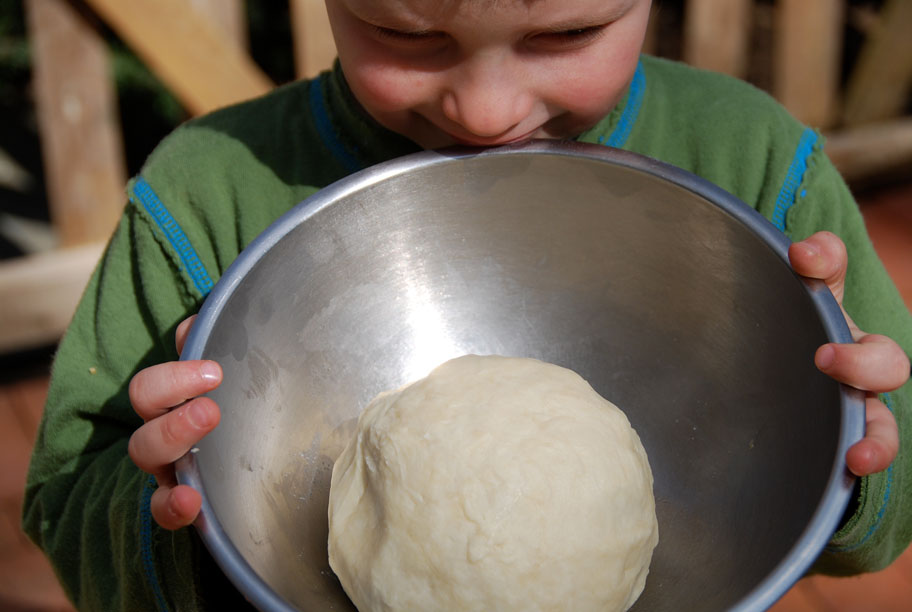 It is easy to roll out as it is elastic, soft and not so sticky. But do sprinkle some flour as you roll… 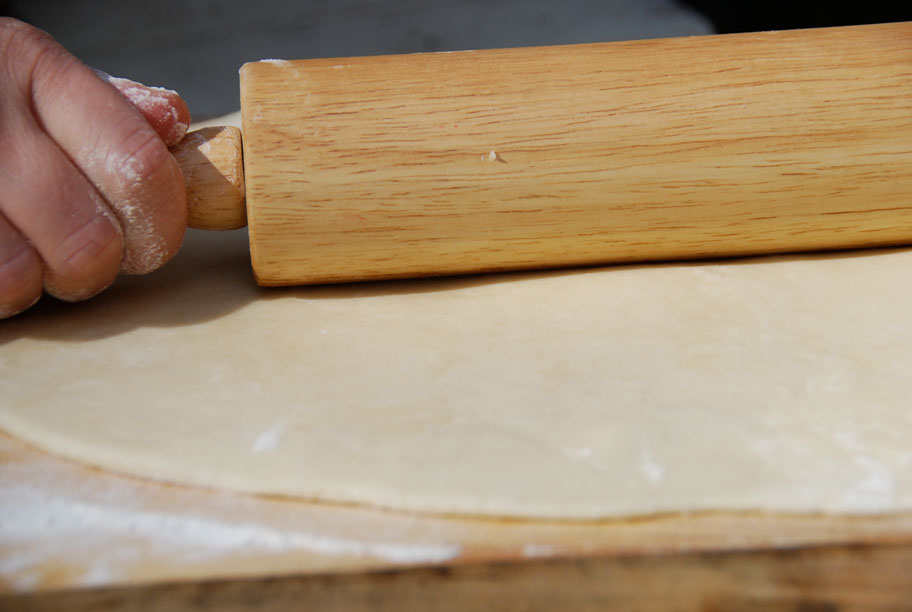 To cut the rounds, you can use a pastry cutter. I found the size I wanted, a 4 inch round, in a Tupperware. Which was also easy for Juju to use. 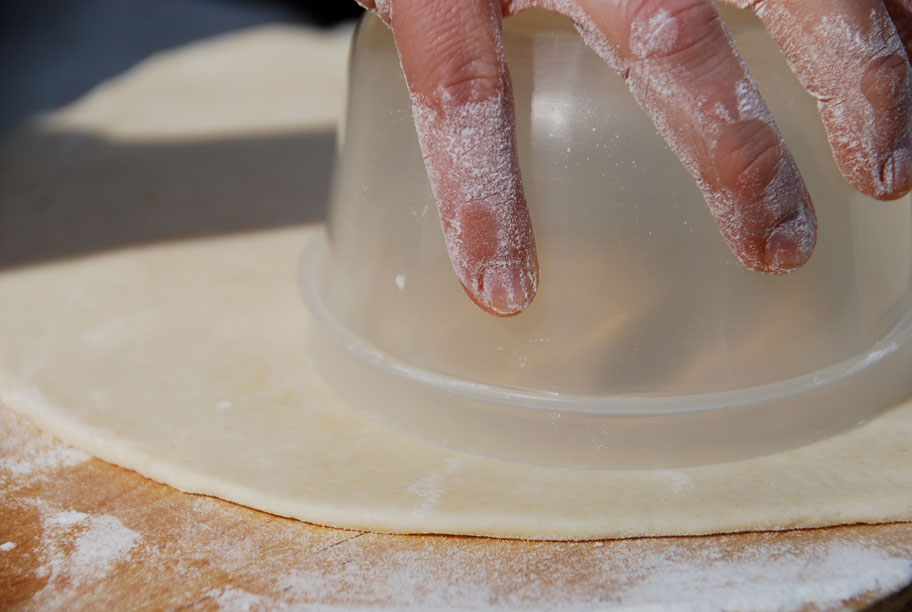 As you separate the rounds… 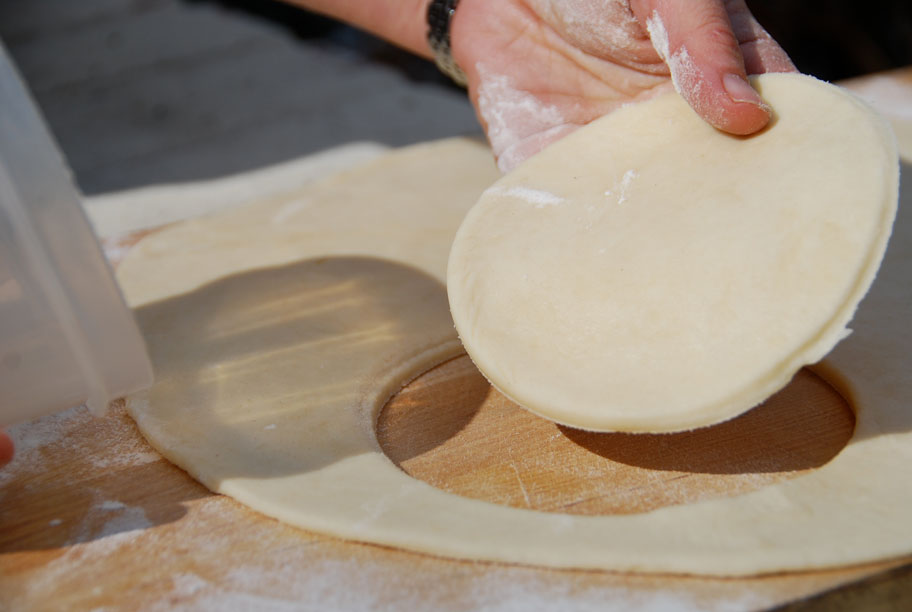 …brush the edges with a lightly beaten egg. 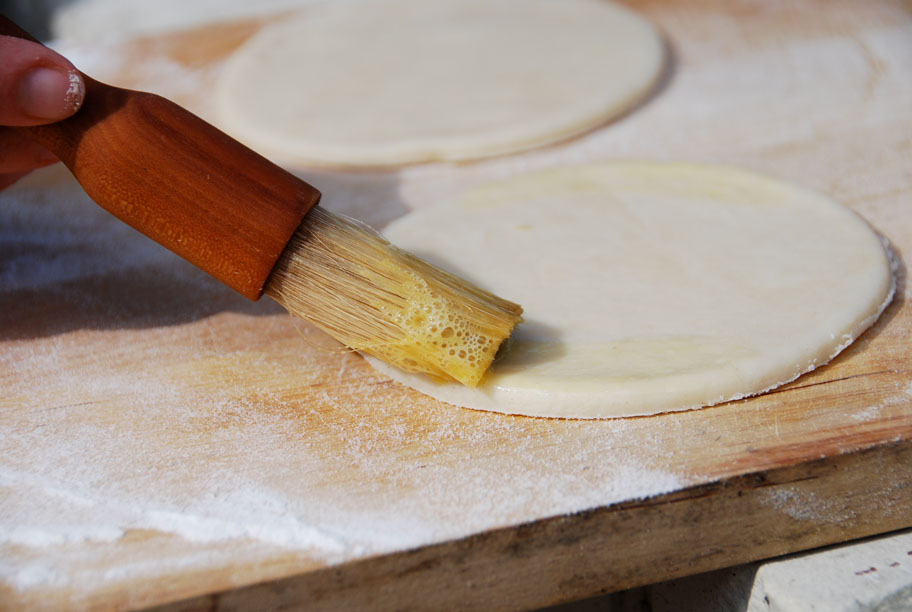 Spoon the filling right down the center.

The Meat Picadillo is included in the recipe below. Picadillo, has many variations, but it typically has as a base of ground meat seasoned with garlic, onion, tomato puree, spices and sometimes nuts, olives and sweet ingredients like raisins or dried fruits. A complex version of Picadillo is used in the legendary Chiles en Nogada. 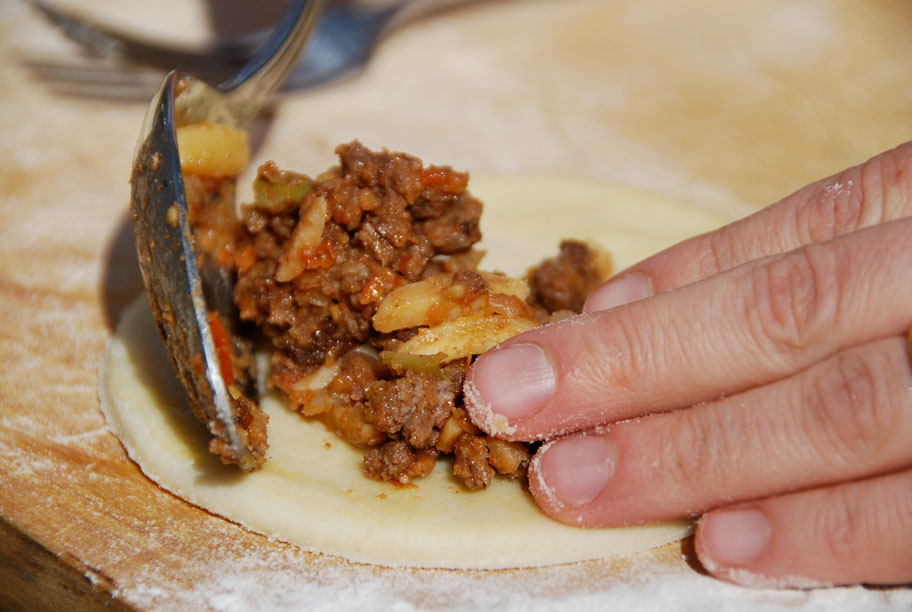 This is a simpler version, that can be made a couple days ahead of time. Just take it out of the refrigerator when you are ready to fill those Empanadas (If you have leftover Picadillo, you can make tacos, stuff chiles, tamales… or eat it with a side of rice or tortillas!)

Close up the bundle in the shape of a turnover. 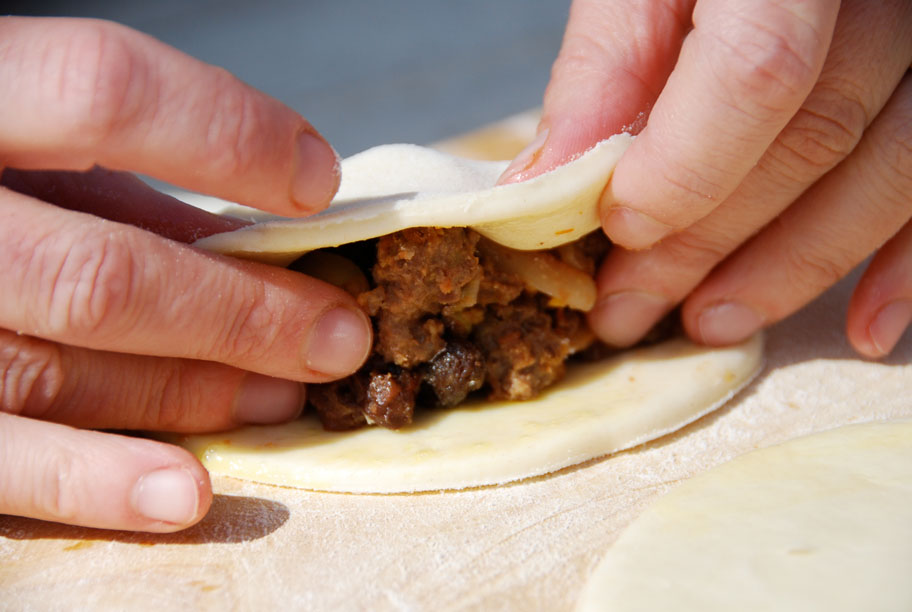 Seal the edges pressing your fingers. 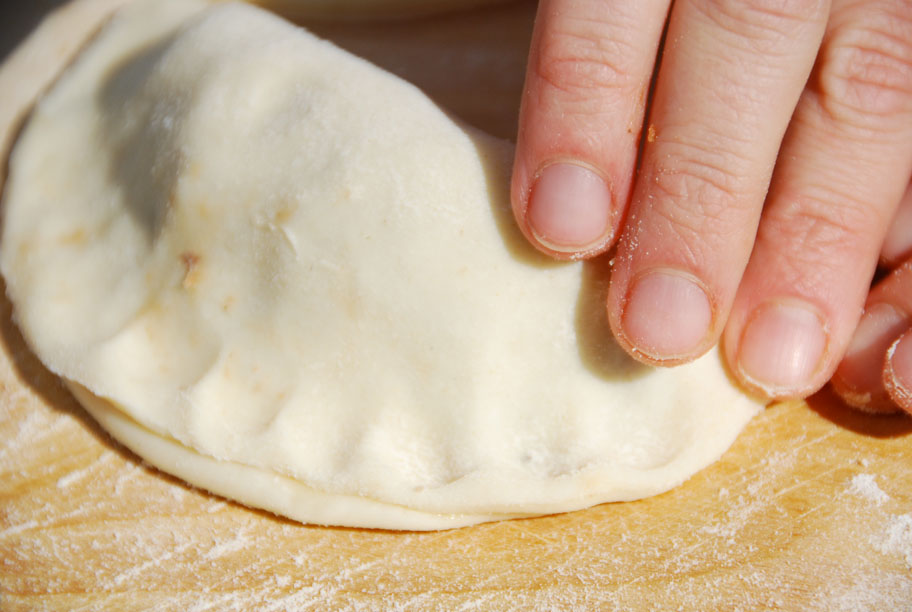 To really seal the deal, go around with a fork, gently, so as not to make many holes in the dough… 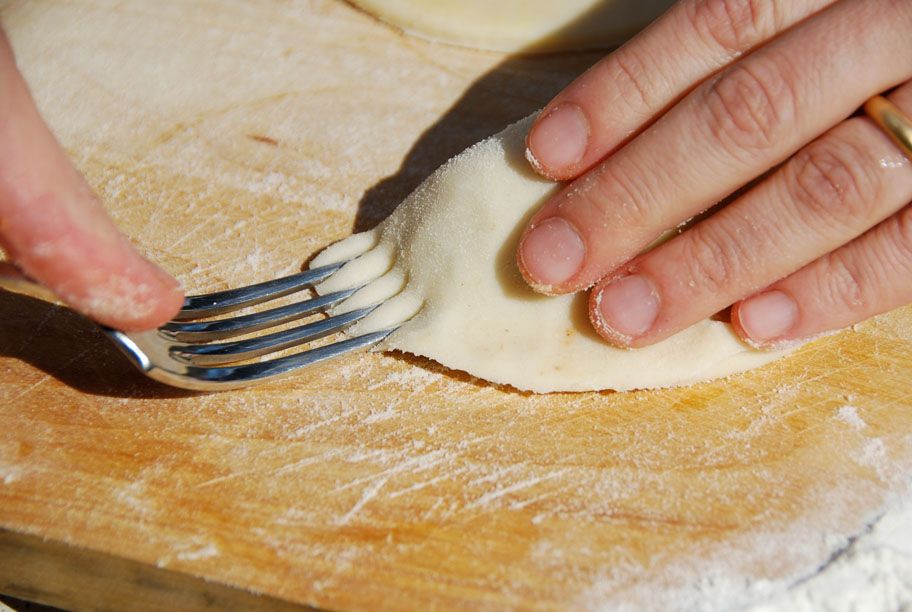 Give the Empanada a final egg wash. 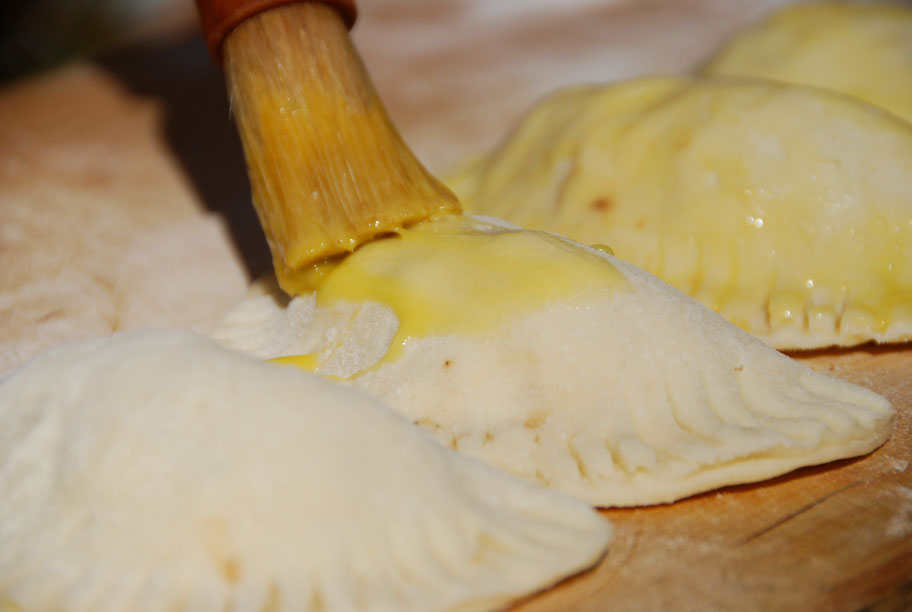 Here we go, one after the other… 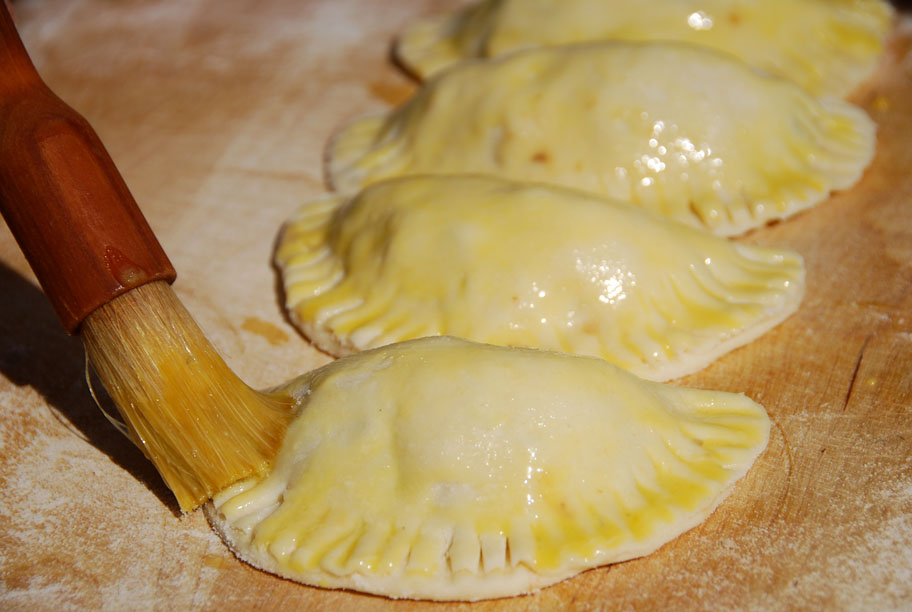 Sprinkle with sesame seeds. It makes them look beautiful. I think Beatriz da Silva would approve.

The sesame seeds also give the Empanadas a light nutty and toasty accent. 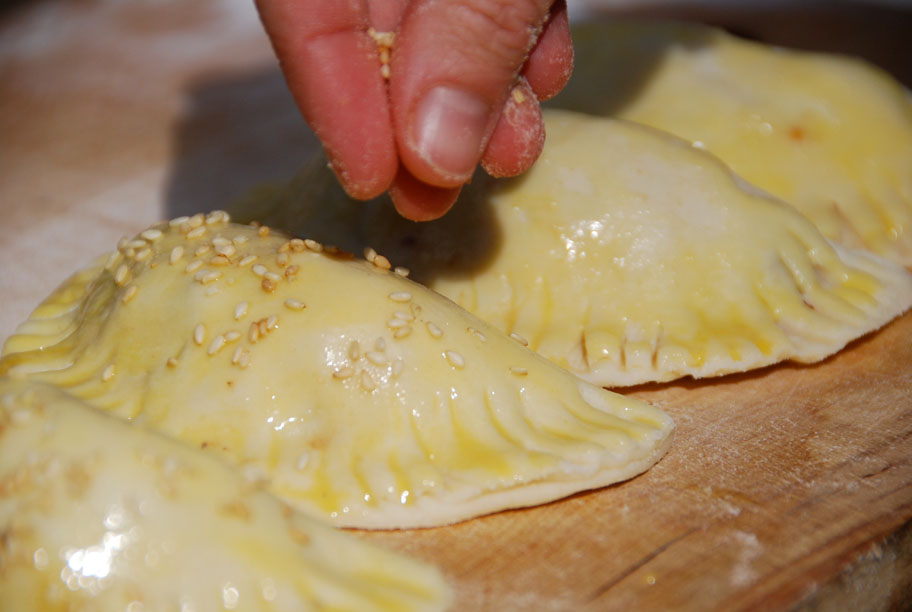 And in the oven they go. You can also make them ahead of time and place them in the refrigerator (for a couple of days) or freezer (for weeks!) before baking them.

Take them out as you need them and eat them freshly baked. As they should. 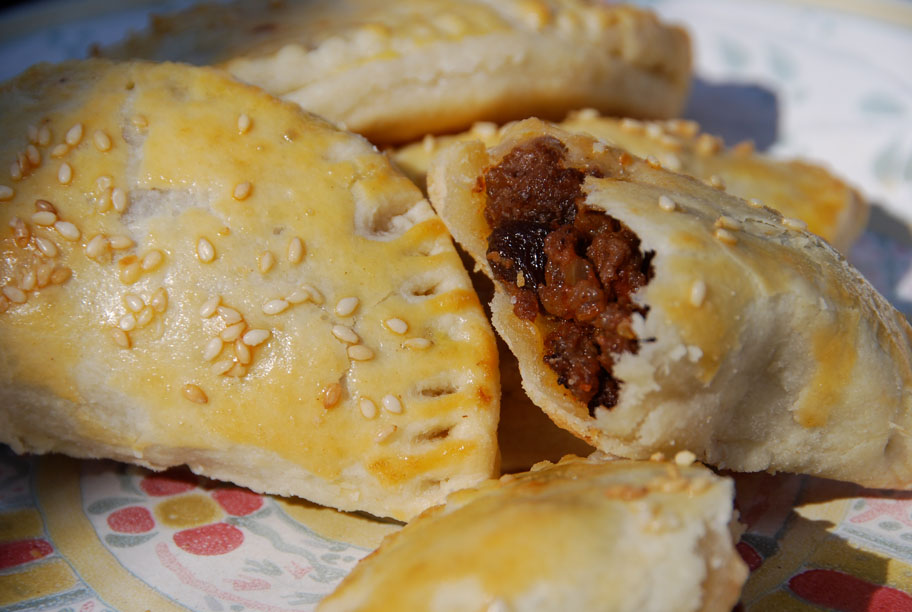 I think that you do taste all of the flavor, all of it, behind the history of these Empanadas, in each single bite.

Picadillo Empanadas of the Immaculate Conception

For the picadillo (makes about 4 cups):

To make the dough:

To make the picadillo:

56comments inEmpanadas of the “Immaculate Conception”