I don’t think twice about eating a hot stew in the summertime. And, as far as I know, millions of Mexicans feel the same way.

You will see Pozole served in fondas in the middle of June, hot Caldo de Camarón as one of the most popular items on beach restaurant menus, and the famed Mole de Olla being ladled, sizzling hot from the pot, in markets all over the country at peak midday heat.

I’ve read that having something hot in the summer will actually cool you off. It turns out chiles are thought to have the same effect.  All these Mexican stews, quoted above, have rich broths that are usually flavored with one or more kinds of chiles.

I find these kinds of one-pot meals to be the epitome of how practical and creative human beings can be: economical, filling, and so tasty, they have all you need for a meal in a bowl. All cultures have their ways of making stews. In Mexico, Mole de Olla is a dearly loved one, and it is a dish that, unfortunately, hasn’t become popular abroad… yet.

Mole de Olla has little to do with the mole sauce so many people outside of Mexico equate with Mole Poblano. That delicious, super thick sauce made of dried chiles, seeds, nuts, spices, tomatoes, onion, garlic, chocolate, and numerous other ingredients ground together. Mole de Olla, however, (translates as Mole in a pot) is a revered stew.

As with many of the Mexican stews, the first step for a Mole de Olla is making a broth with the meat, along with some onion, garlic, and herbs. I particularly like to add fresh mint to mine. The meat is cooked until it is practically coming apart, and the broth is as flavorful as can be. The simmered herbs and veggies are removed, as by then they will be extremely mushy and most of their flavor transferred to the broth.

The second step is to take that rich-tasting broth to a higher dimension of flavor. A seasoning sauce is made with ancho and pasilla chiles, toasted sesame seeds, and tomatoes. Usually, xoconostles (a very tart and sour fruit of the cactus plant) are used, but since they are quite hard to find in the US, I substitute for tomatillos, which are tart, not as sour as xoconostles, but hey, they do the trick. The meat broth then simmers a second time as it marries with the seasoning sauce, adding so much depth of flavor: a gentle but addicting heat, a lovely acidity, and a whisper of nuttiness.

As a third step, fresh veggies are added. Corn, zucchini, chayote squash, green beans…but this time, the veggies are cooked just until tender and crisp and also full of flavor. 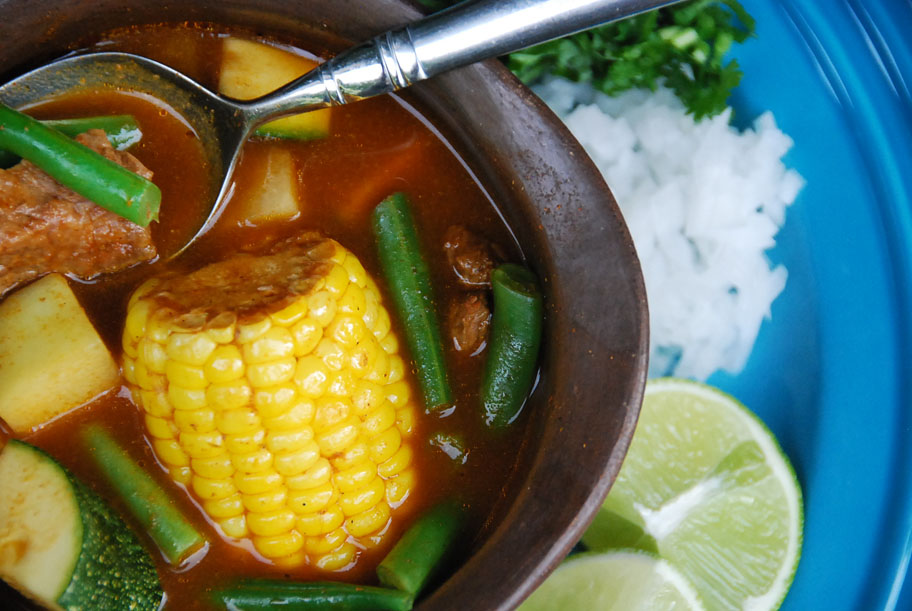 Mole de Olla is a humble dish. A stew made with a piece of meat and fresh veggies that are available year round. Yet, it turns out to be a full blown delicious meal. As anything Mexican, once it is set on the table and everyone gets a share of succulent meat, a lot of deep-tasting broth, and a share of all the veggies, extra garnishes are set on the table to dress it up and enhance the dish even more. You get a chance to squeeze in fresh lime juice to brighten up the stew, and you also get to spoon on crunchy and pungent white onion and cilantro.

This stew is a joy to eat. People eat it almost in a ceremonial fashion. Each person with a set style of their own. Some people eat the corn first, some people leave it for last. Some people first finish the broth and then go for the meat and veggies, or tuck them into tacos.

I eat a bit of everything as I move along. But one thing is definite: once I start, I don’t stop for a second, not even to look around. I sip a little broth, take a spoon with some veggies, some meat, more broth, and with my hands I take some bites of the corn… until there is almost absolutely nothing left in the bowl. At this point, I raise the bowl to finish the last sips of broth.

Then I wish for another go, just to repeat the experience. Though I always realize I am full, content, and feel so at home.

P.S. Fall is around the corner, and guess what, Mole de Olla is also fabulous for cold nights. So don’t store this recipe for the summer, keep it out, all year round. 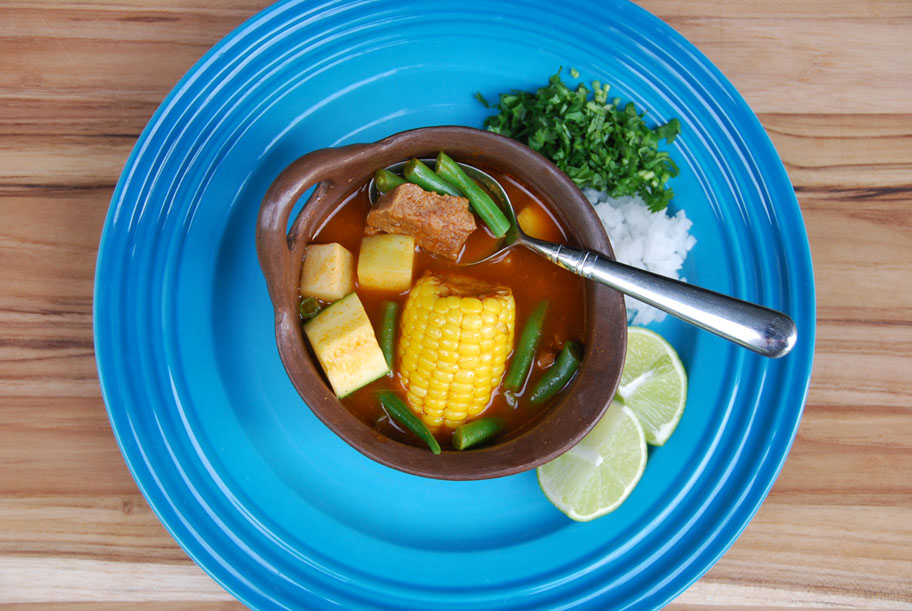