I wouldn’t be caught dead without Pan de Muerto during Day of the Dead.

One of the most meaningful, colorful and delicious of Mexican celebrations, Dí­a de Muertos has this bread as one of its trademark treats. It may sound strange to eat fluffy sugared up bread in the shape of bones, but then again, we also eat calaveritas, candies in the shape of skulls. This shows how crucial food is for Mexicans but also how it gets infused with our sarcastic sense of humor, generous spirit and gutsy attitude.

Not that Day of the Dead is such a big occasion here in the United States, but I notice an increased awareness. Teachers are starting to talk about it in schools, sugar skulls and decorations are popping up in stores…It’s becoming trendy. As it happens right on the tail of Halloween, elements from both celebrations seem to cross paths. They both include graveyards and a lot of eating, but they are quite different.

Day of the Dead, which is not one but two days, November 1st and 2nd, is when those departed have a license to come back and visit the ones they’ve left behind. And hey, if they are coming back from another world, it better be a feast worth the trip! Altars are decorated, filled with the visitor’s favorite foods and drinks, candles and flowers placed throughout, to help illuminate for a safe journey back home. There are visits to the cemetery, too, but of a different nature than Halloween: Day of the Dead is a bittersweet, sad and joyous time for gathering, feasting and remembering.

Pan de Muerto, has to be one of the sweetest sides of it, eagerly awaited by all.

Those who have tried it want it, as it is really irresistible. But there are not that many panaderí­as that make it outside of Mexico. 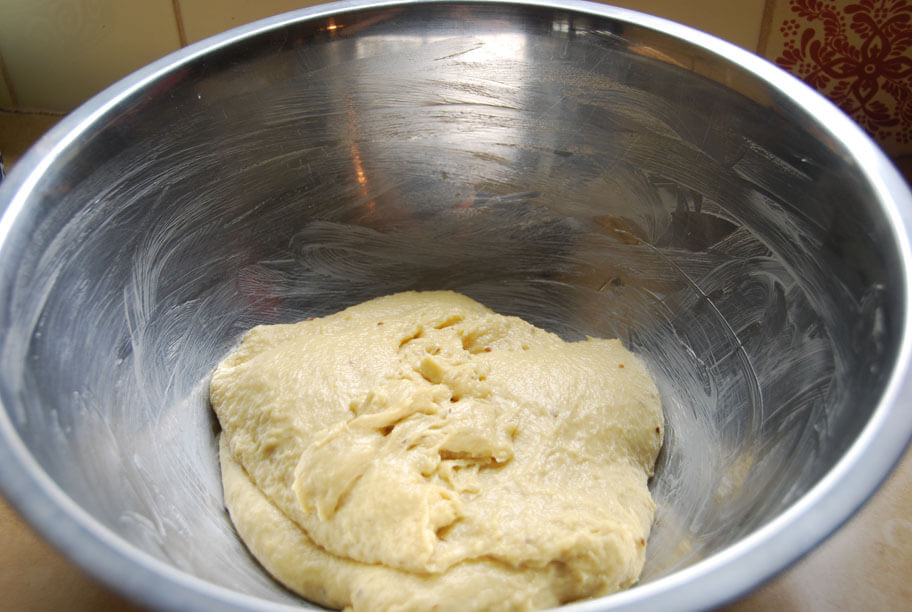 Well, guess what? Wait no more, you can make your own.

It is simple to do; the only downside is, it takes time. The dough needs to rise…four times, and one of them is overnight in the fridge. So if you want your Pan de Muerto for Friday, start it on Thursday.

First make your starter: a small leavened mix. I make mine by mixing dry yeast (oldest versions of Pan de Muerto use Pulque, a fermented drink) with lukewarm milk, not too hot and not too cold, to make it easy for the yeast to react. Fully dissolve and add a bit of flour, to get the yeast going on stronger. When it puffs up and has bubbled on the surface, about 20 to 30 minutes later, you have your starter. 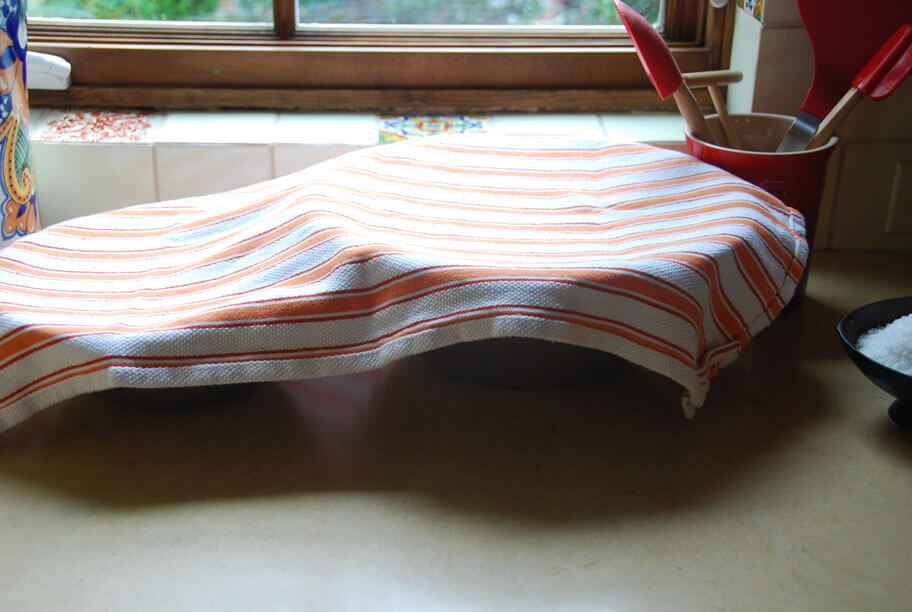 Then make your dough in the mixer with butter, sugar and eggs. I add orange blossom water, as is traditional in many parts of Mexico and the old fashioned way. It makes it fragrant and light. I also add a bit of orange zest and anise seeds, which perfume it even more. Once mixed, beat in the starter. Cover it and place it in a bowl.

It’s better if you leave it in a warm area of your kitchen where there are no drafts, close to the oven or burners is a good idea, too. Leavened bread likes warmth and moisture, so much so, that I have gotten into the habit of placing a bowl with boiling water right next to the bowl with the dough and then cover it all together (in case you were wondering about the two bowls under the kitchen towel above).

Then leave it to rise. 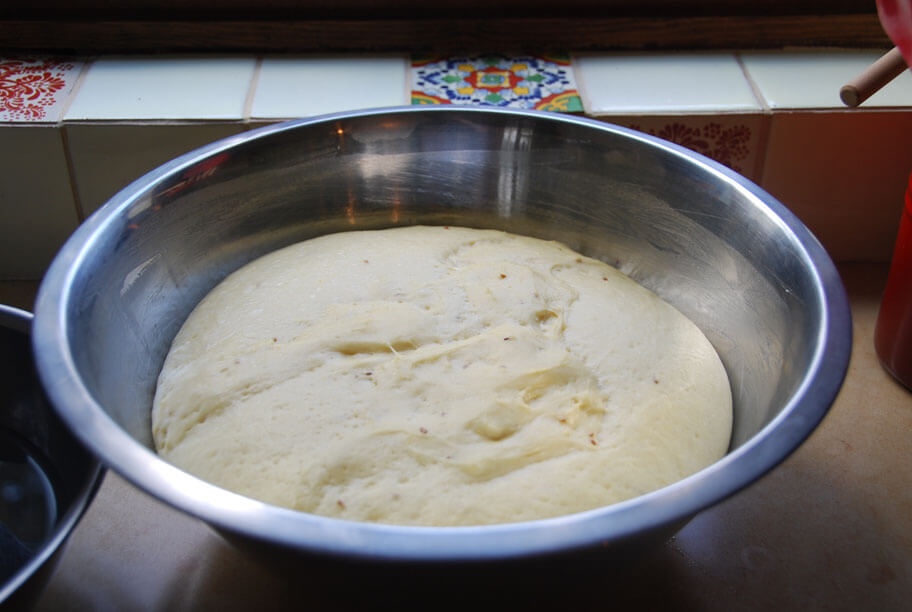 See how it puffed up in photo above? Almost tripled its volume.

Then punch it back down. Just like that, make some fists and punch it twice. 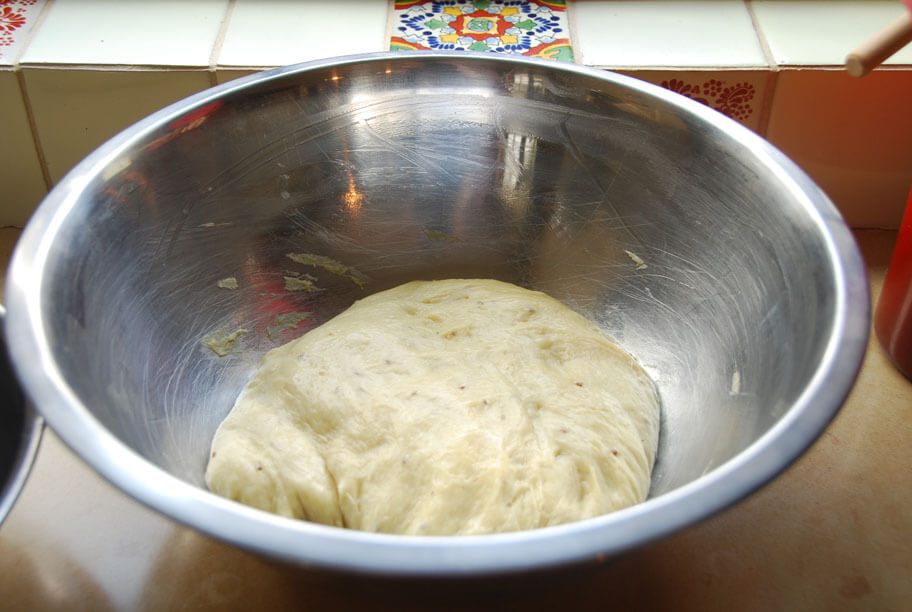 Cover it with plastic wrap and place it in the refrigerator so that it will slowly but surely rise again, overnight. While you sleep, that dough will be getting ready for you. 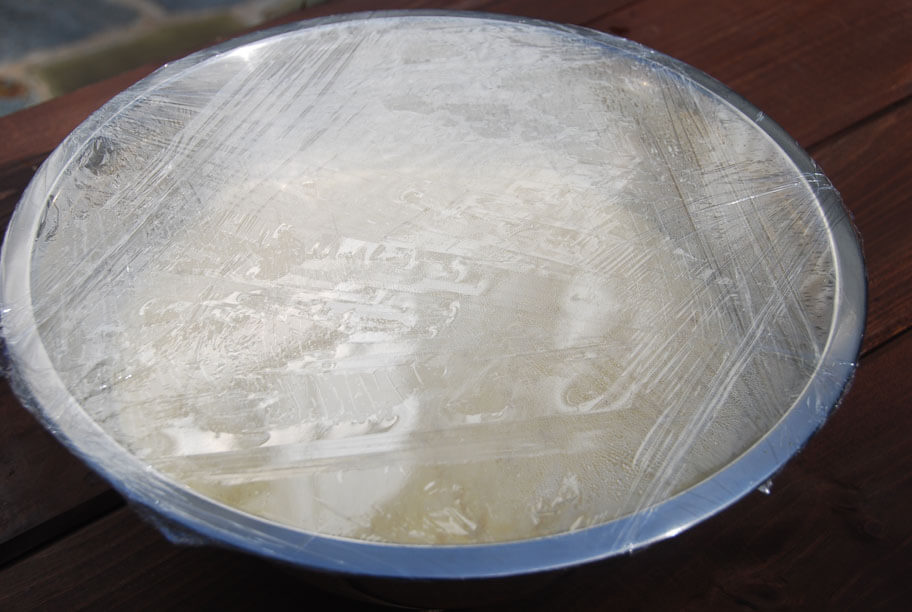 See below?? Look how it rose again!

This time it was even bubblier and a bit stringy.

This is the third rise. Next day, morning sun. 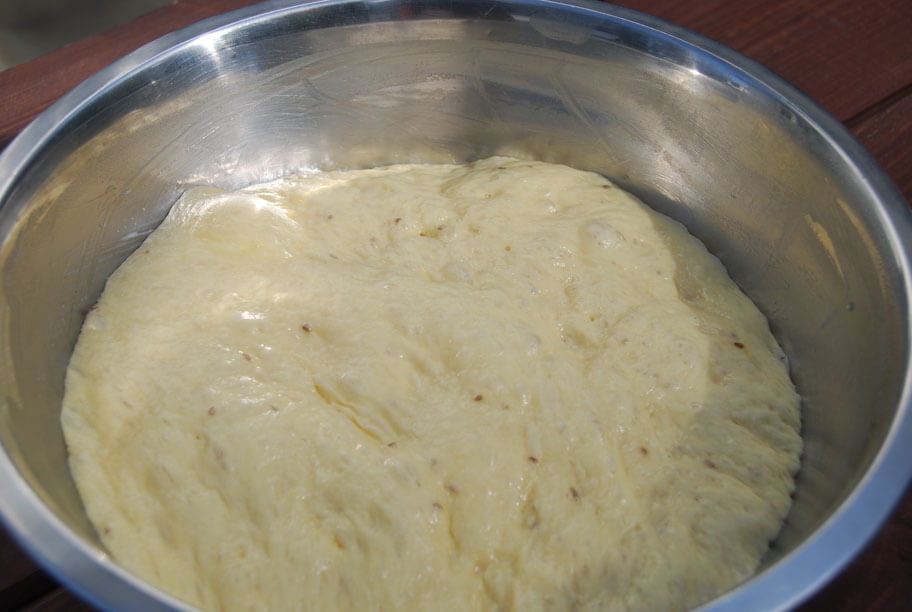 Then as you gather it into a ball, it will deflate in size, but you can see below how the dough has transformed and strands of dough are trying to stick to the bowl. 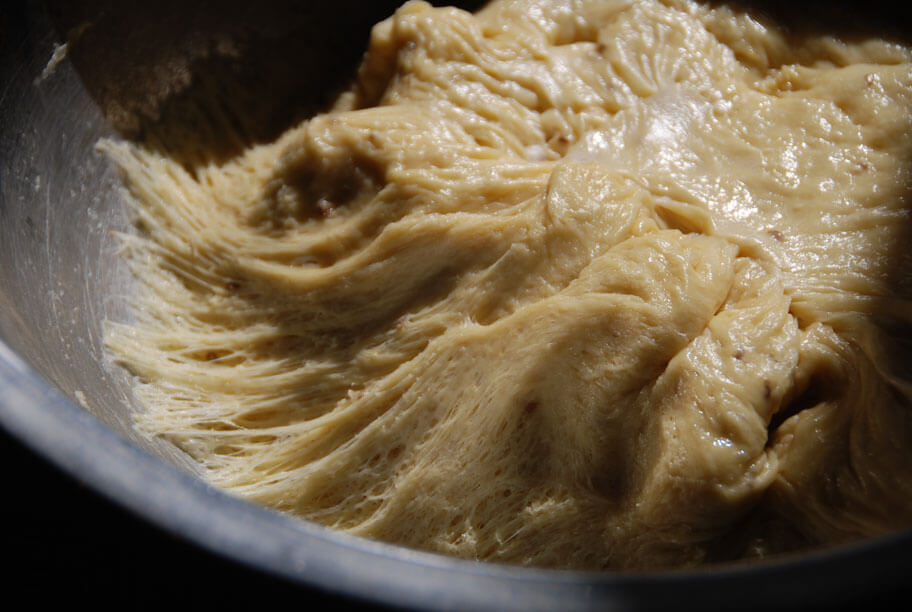 The dough ends up being shinny, sticky, compact…

Grab two thirds to shape like a ball and place it over a buttered or oiled surface. I like using this pizza stone. 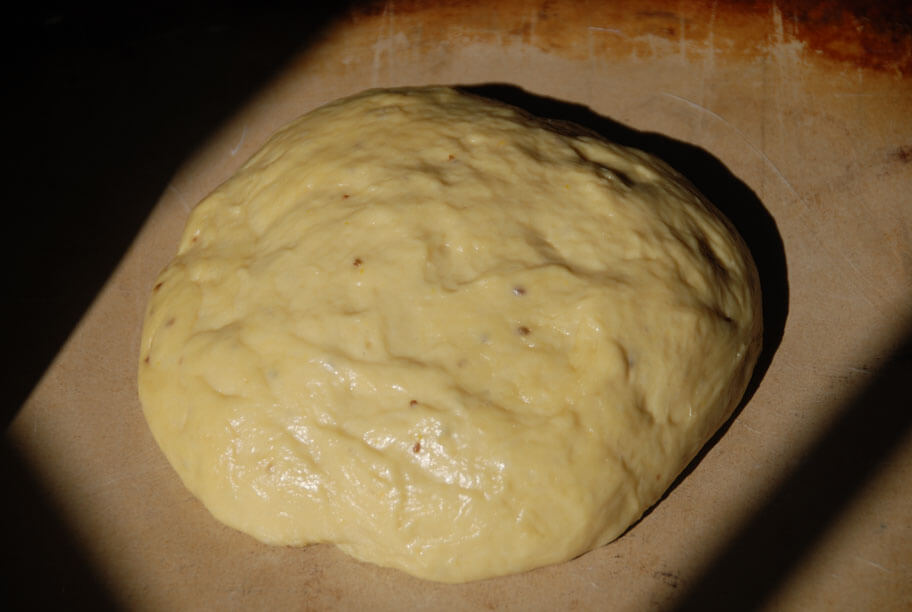 You leave a third of the dough apart, to decorate the ball with a couple of ropes and a ball on top. And then.. you cover it and let it rise again under a towel. 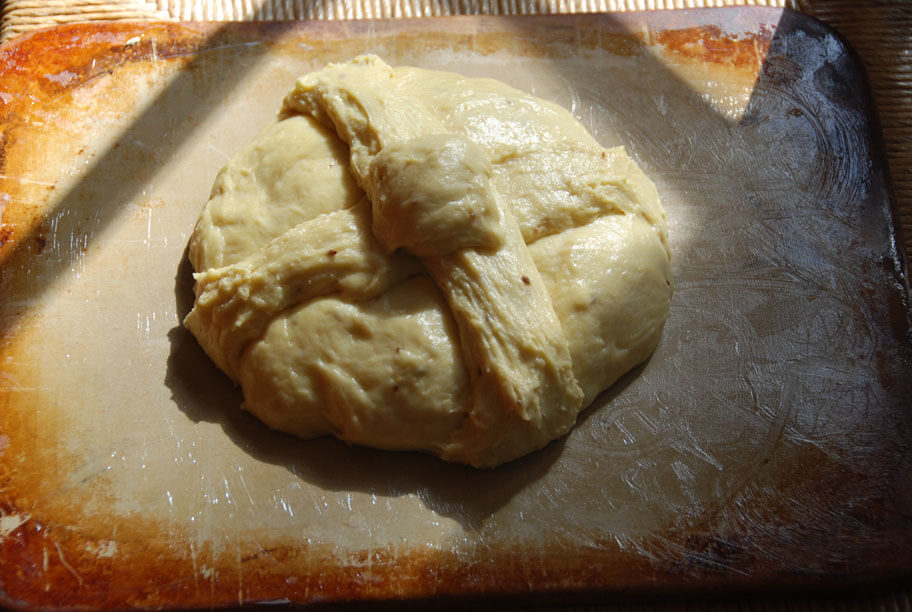 And so it rose, under the towel!

In the oven it goes. 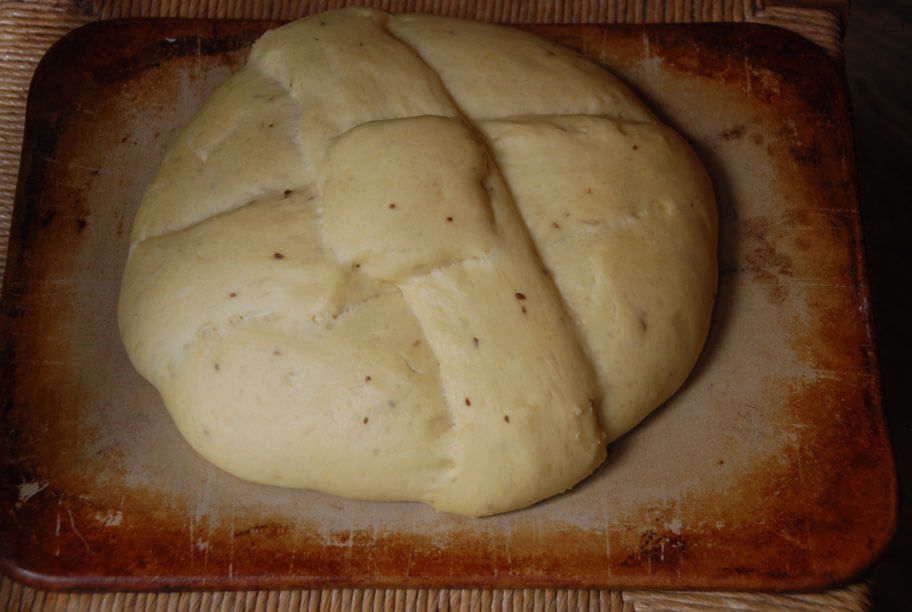 Lastly, when it comes out, it is entirely brushed with melted butter and covered in sugar. Some people add more complex decorations, like colored sugar or make intricate shapes. I like it straightforward with plain granulated white sugar and a round shape.

By mid morning the next day, you will have a Pan de Muerto ready to slice.

So, yes, it takes time, it has to rise many times, but every time it rises again you will feel a huge sense of accomplishment and satisfaction… And as you bake it, maybe you will find like me, that whoever is around in the house will start lurking in the kitchen to eat whatever it is that has such an irresistible aroma. 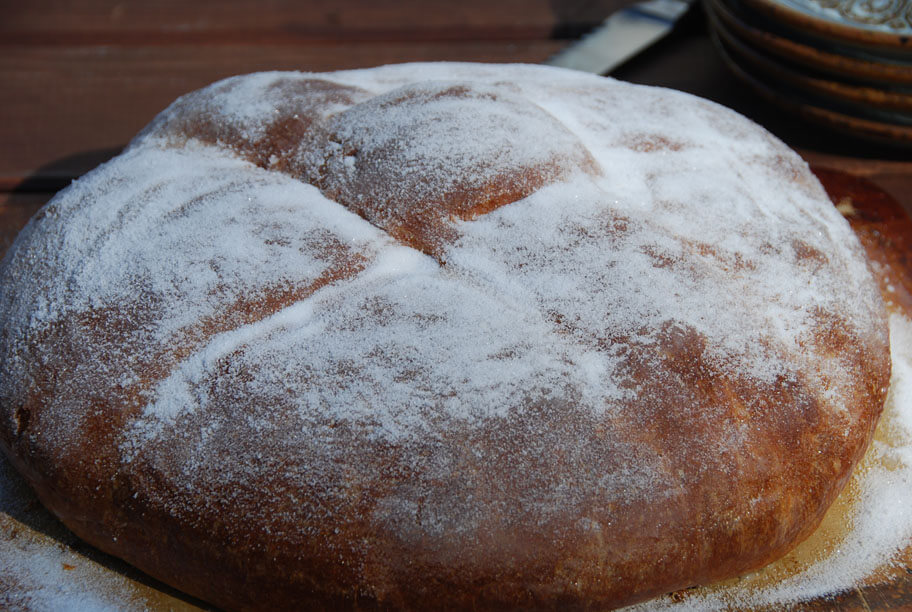 Maybe you will find, also like me, that it was well worth the wait.

To make the starter:

To make the dough:

Conchas Francisco Migoya’s Conchas recipe from Pati’s Mexican Table Season 10, Episode 7 “Getting to the Roots” For the dough:½…