They go hand in hand, Autumn and Pumpkins.

In the US, I see them scary faced on Halloween, and then, sweetly dressed as pumpkin pies for Thanksgiving. Yet to me, one of their best impersonations is as Calabaza en Tacha: Pumpkin cooked in a Piloncillo Syrup.

Craving Tacha, I paired two things: The pumpkin I saved from my boys’ Halloween makeover and my new orange flamed French Oven.

It was a matter of time. The French Oven needed a sweet Mexican ride to become baptized in my kitchen. 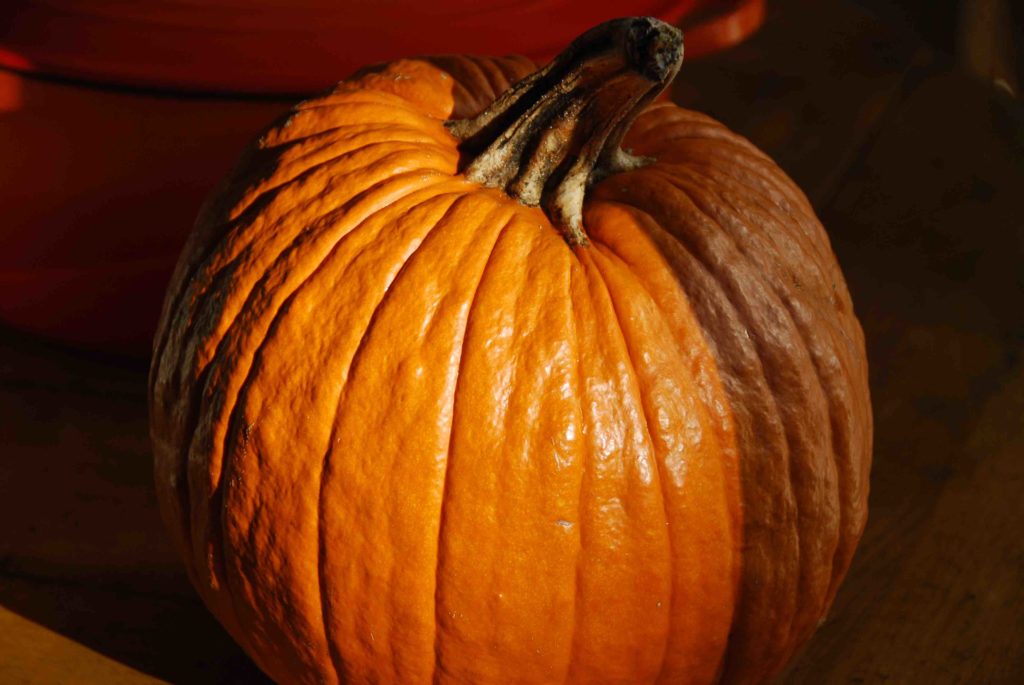 Making Pumpkin Tacha in a French Oven or heavy pot is a contemporary trend. The original method, as in XVII c., was to cook the whole pumpkin in a Tompiate (woven palm leaves basket) for hours, simmer it in lime water (not lime as in citrus but lime as in slaked lime or calcium hydroxide, so the thick skin of the pumpkin wouldn’t come apart), bathe it in syrup and cook it for hours, and finally, let it bask in the sun for many more hours.

That was a long and messy ordeal for sure. But there was no refrigeration then. Times have changed. No Tompiate nor slaked lime needed anymore.

You can make your Tacha (sounding like Cha Cha Cha) in a fourth of the time and in a simpler way.

First, place the Piloncillo or brown sugar in a large heavy pot. 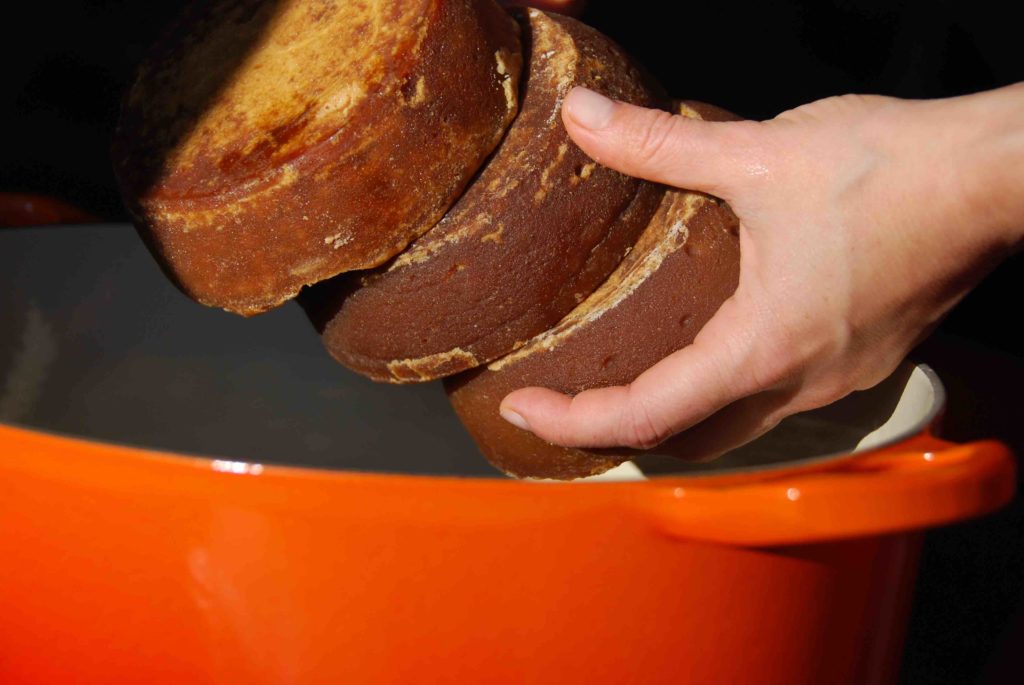 Pour water over the Piloncillo. If you find Piloncillo also called Panela, you will get that old fashioned, deep, rustic and small Pueblo flavor right there. But brown sugar also does a pretty good job. 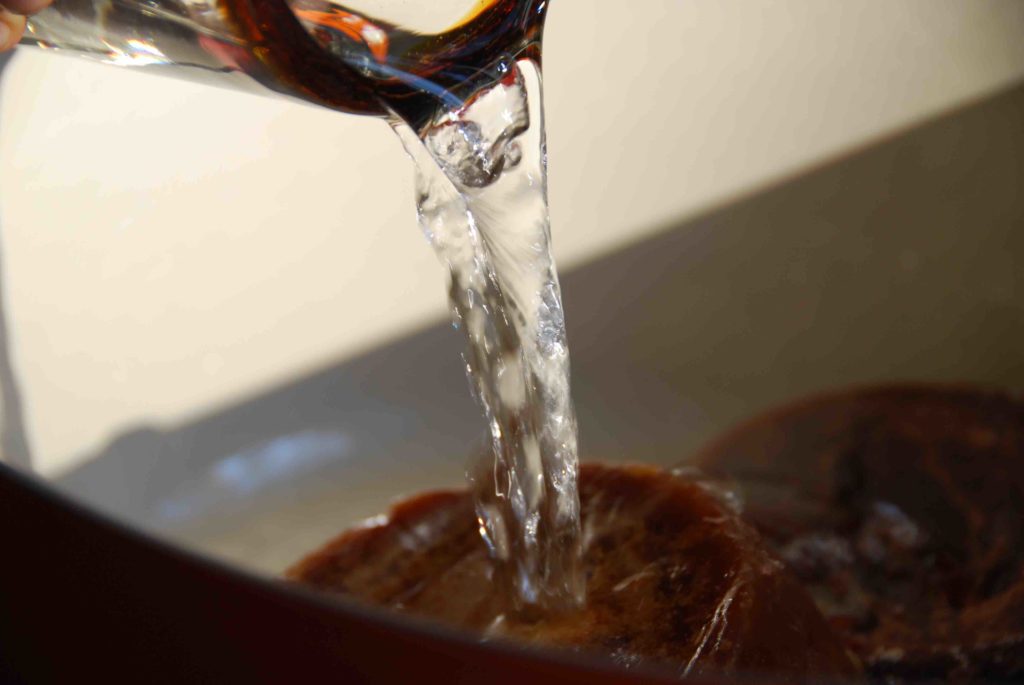 Place the cinnamon sticks in there too. Not all Tachas have cinnamon, but I like it. If you find True or Ceylon cinnamon, which is soft, crumbly and very aromatic it will have a more Mexican feel. If you only find Cassia, no worries, that works too. 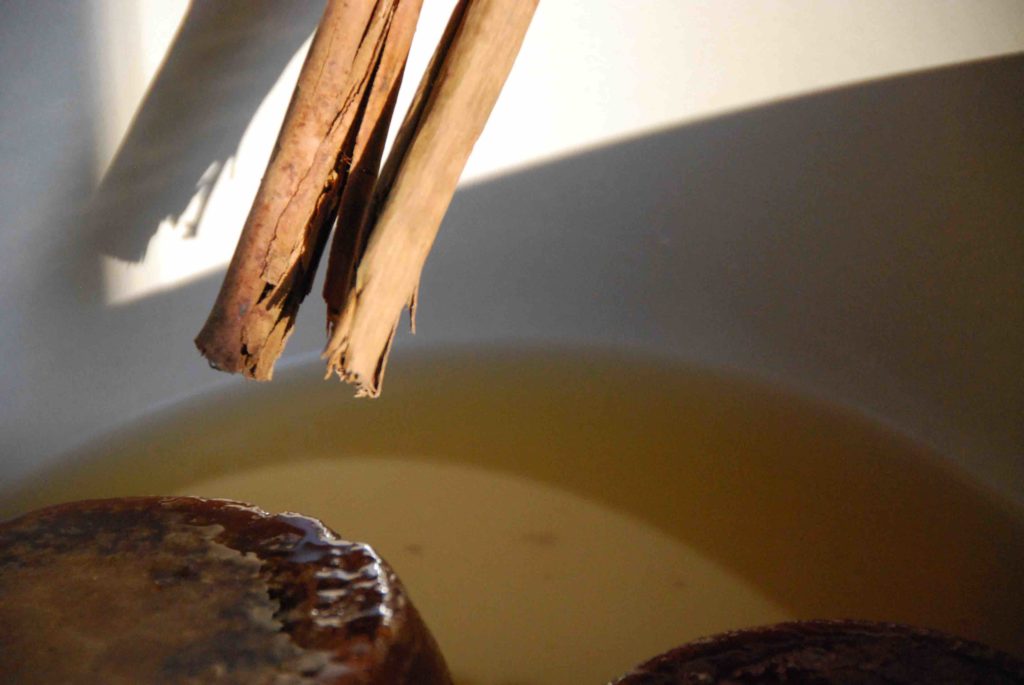 I like to add the rind of an orange, because it cuts across the sweetness of the Tacha in a stunning way… 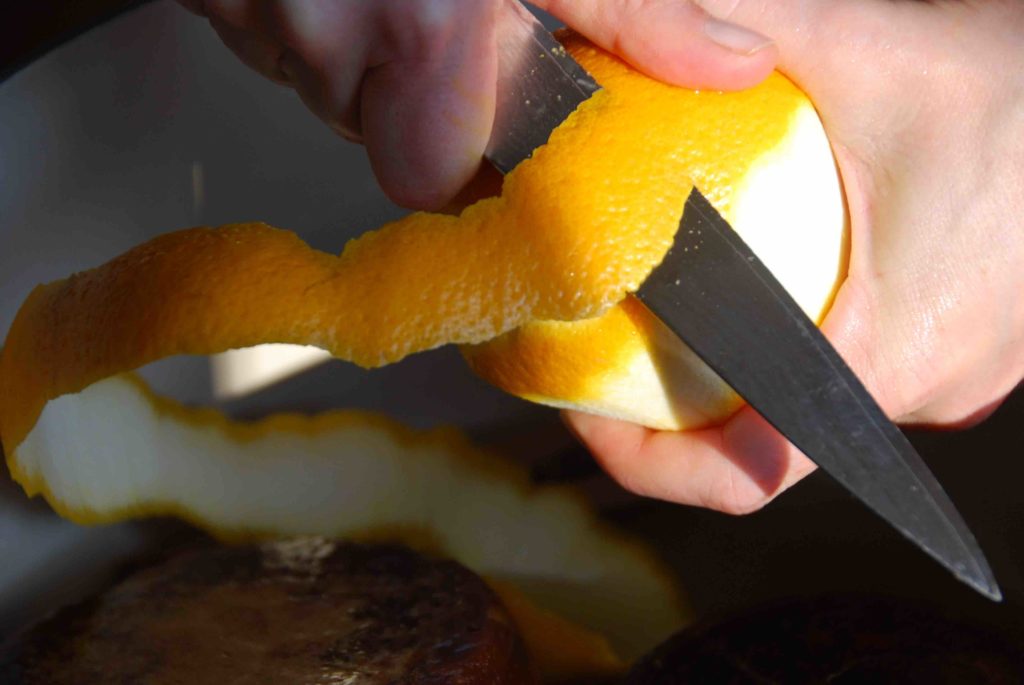 …as well as the juice. 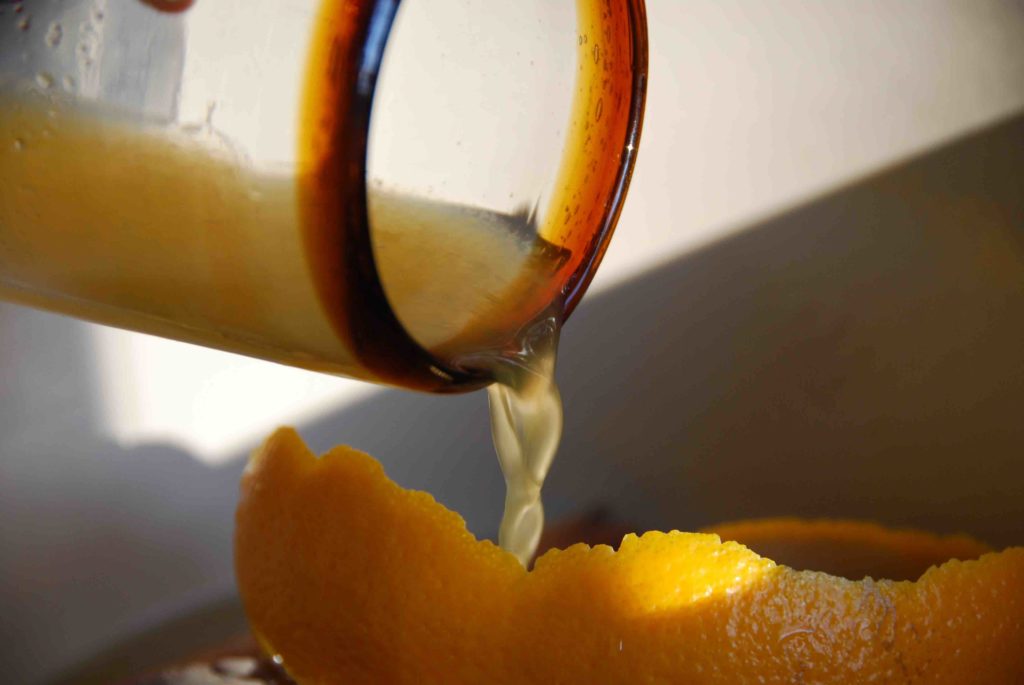 Not all Tacha versions have cinnamon, orange rind or orange juice. Mine does.

Whichever way you go, let the piloncillo or brown sugar dissolve in the water over medium heat before you add the pumpkin. 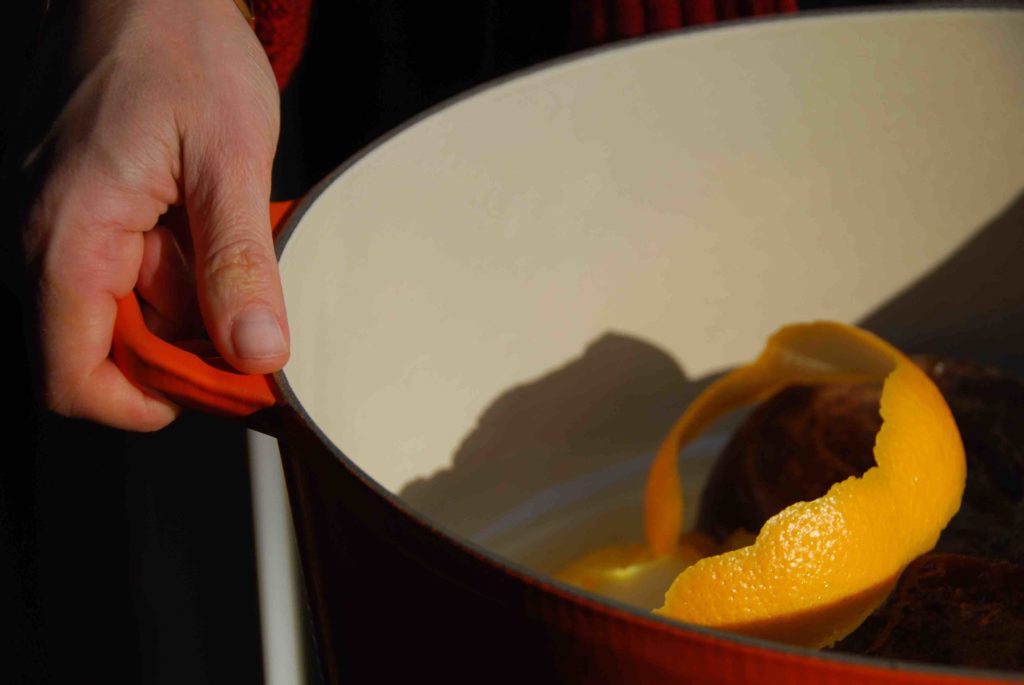 That gives you time to deal with the pumpkin…

Rinse it and cut it into large pieces. 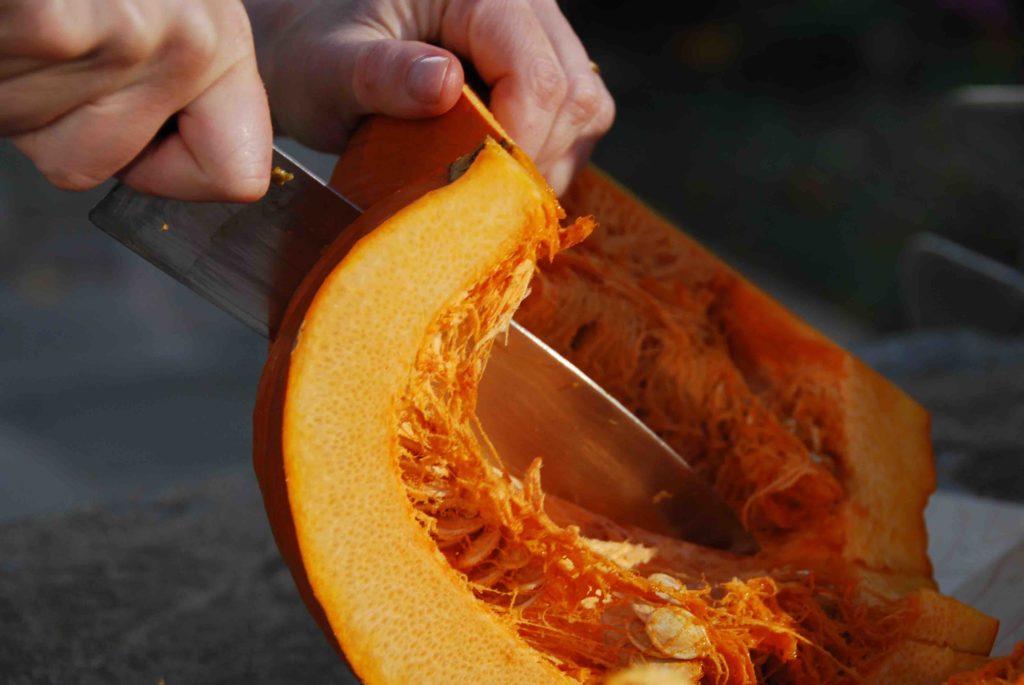 Then cut it into individually sized chunks, of about 3″ by 3″.

It is up to you if you want to remove the seeds and strings. Some cooks do, some cooks don’t. I LOVE to leave it all on. It magically transforms into something delicious as you cook i. Plus, those sweetened pumpkin seeds are to die for. Really.

If you do scoop out the seeds and strings, save the seeds so you can rinse, dry and toast them to make Pepitas. 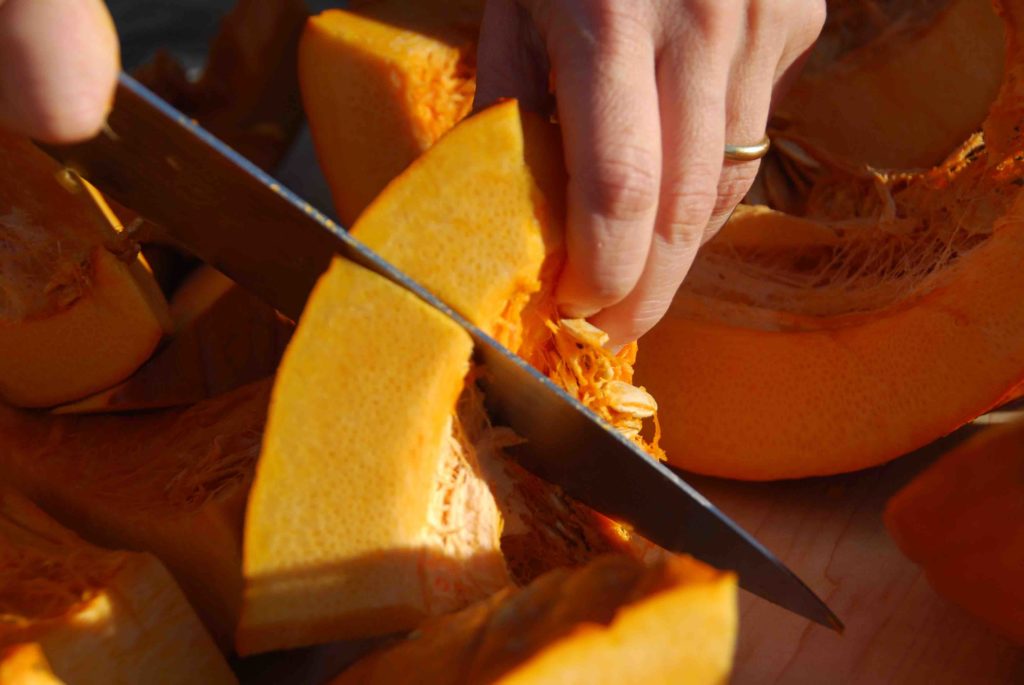 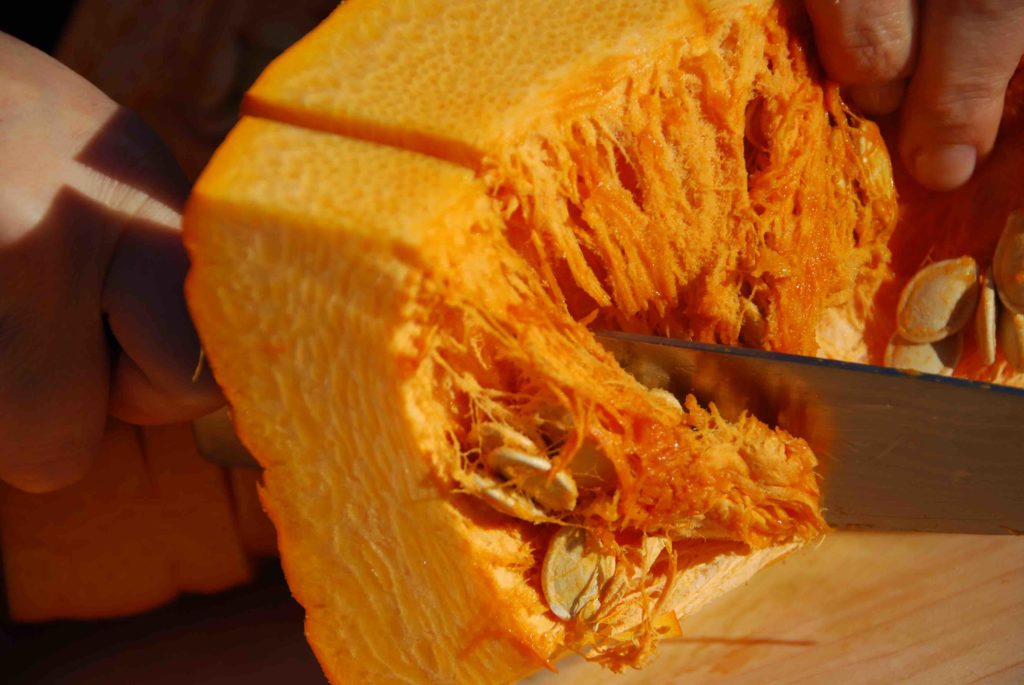 Using a knife, make some slits in the skin of the pumpkin chunks, without cutting all the way through. This will help the thick skin get all soaked up in the sweet citrusy syrup. 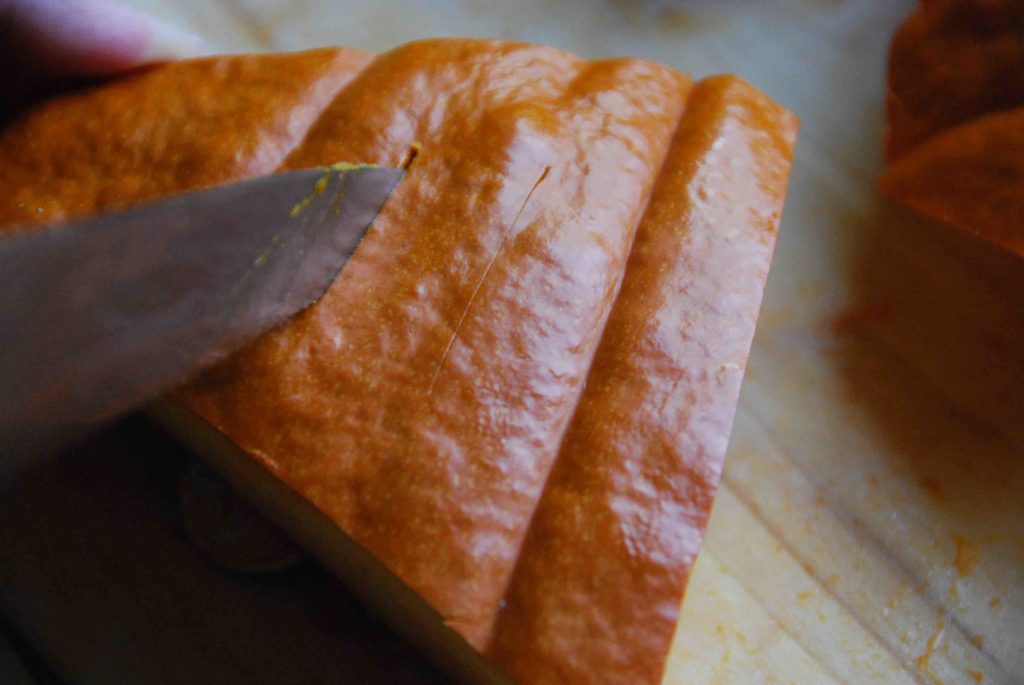 Once the piloncillo has dissolved into the water, layer the pumpkin chunks.

First, do a layer skin side down… 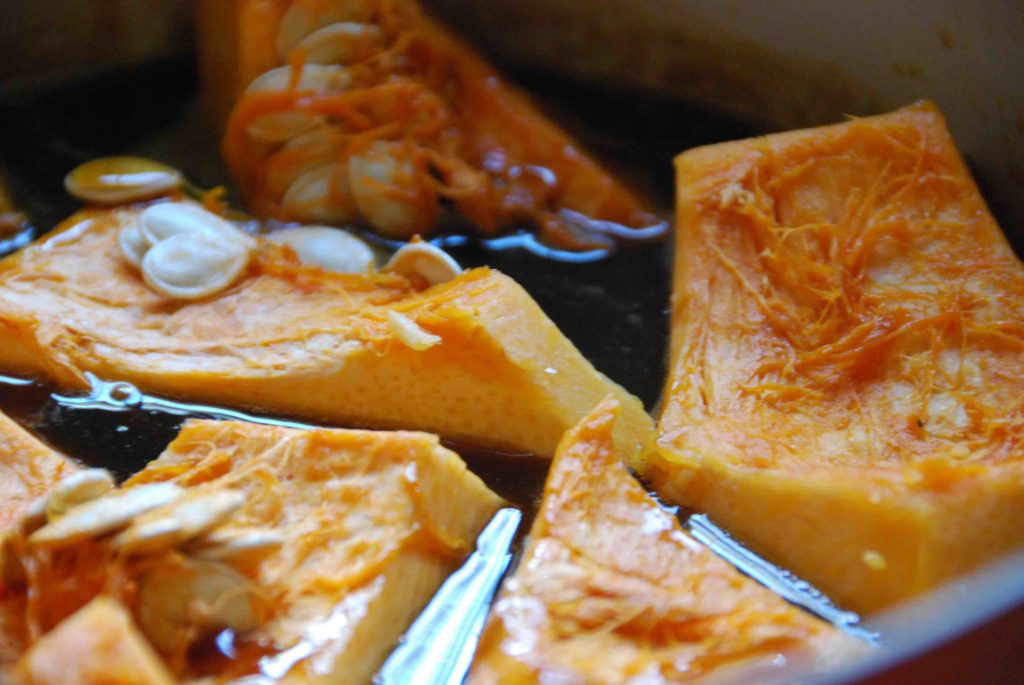 …followed by a layer, skin side up. Don’t worry if it seems like the pumpkin chunks aren’t all covered in the syrup. 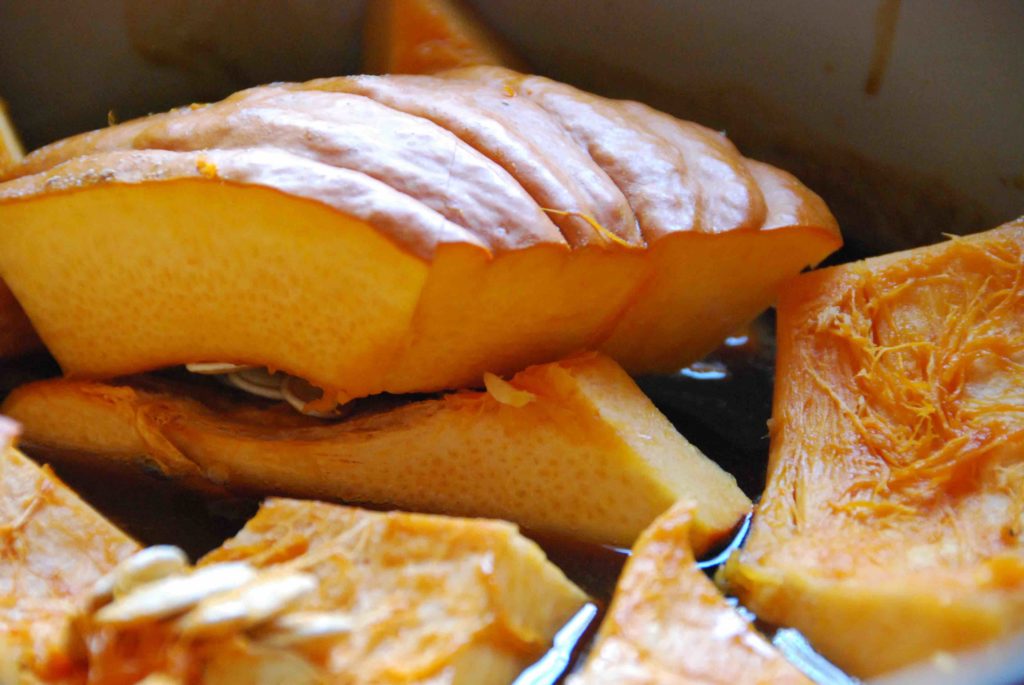 Once you cover the pot and let it all cook over medium heat, it will ALL get soaked up.

After you place it all in the pot, you have nothing to do but let the heavy pot do its thing.

That’s how it looks after just one hour… 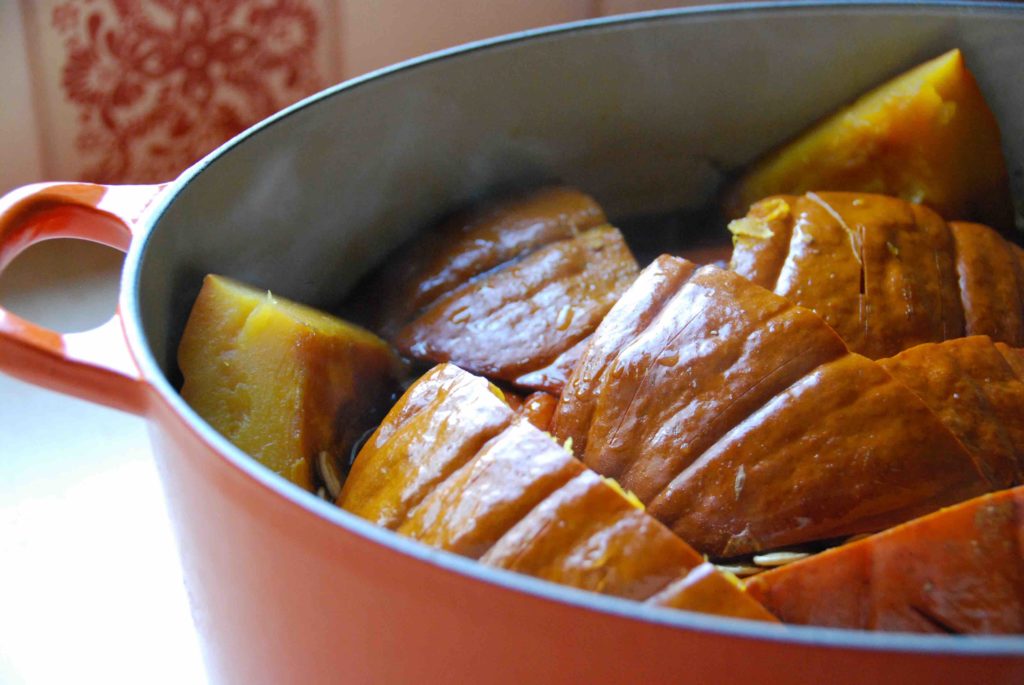 See? It all gets soaked up. 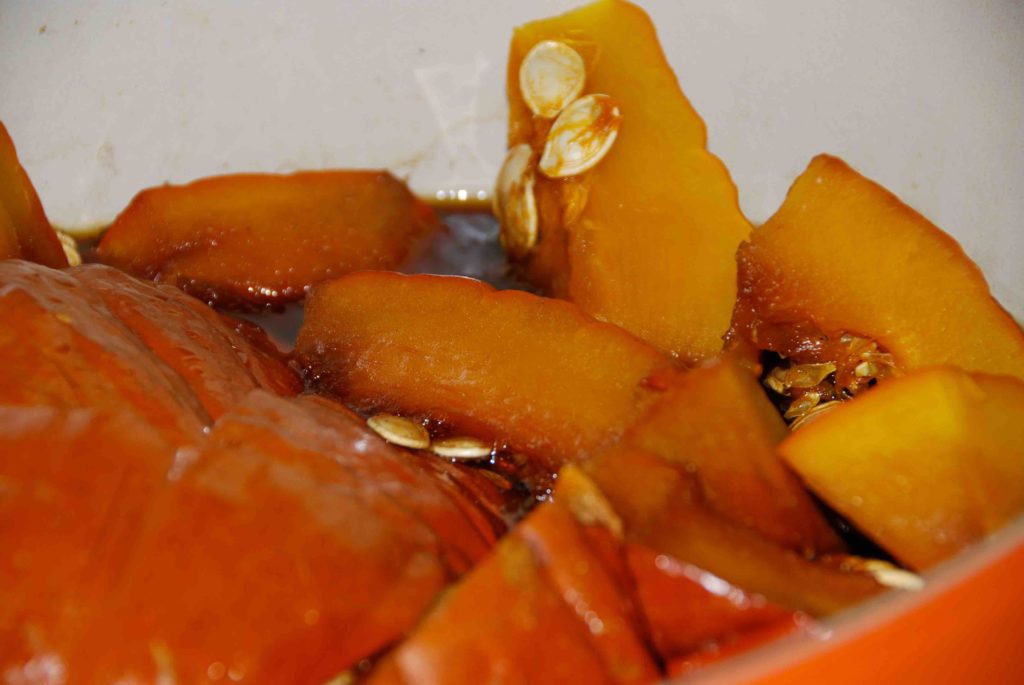 That’s how it looks after another half hour.

Don’t you dare complain…. you could have been gardening, taking a bath, reading or tweeting all this time. Or something.. 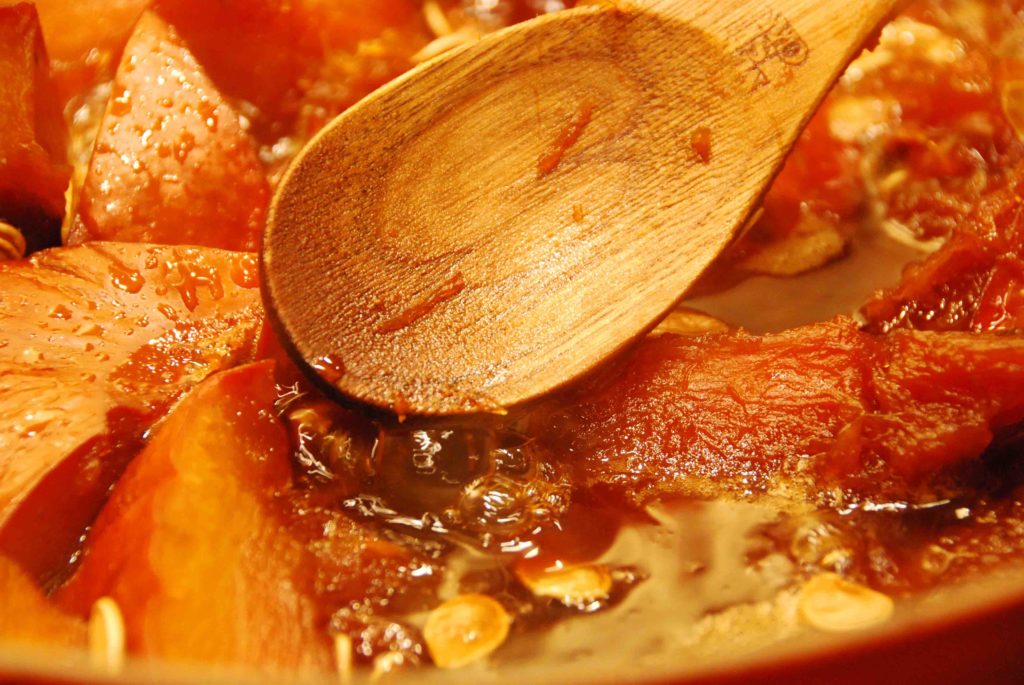 Then let it simmer uncovered for a half hour and turn off the heat.

The pumpkin will look wet. Really wet. But as it cools down, the chunks will soak most of the syrup and the remaining syrup will thicken. A lot.

You can eat your Tacha still warm.

Or you can let it cool, refrigerate and eat it cold. It will keep in the refrigerator, covered, for months! 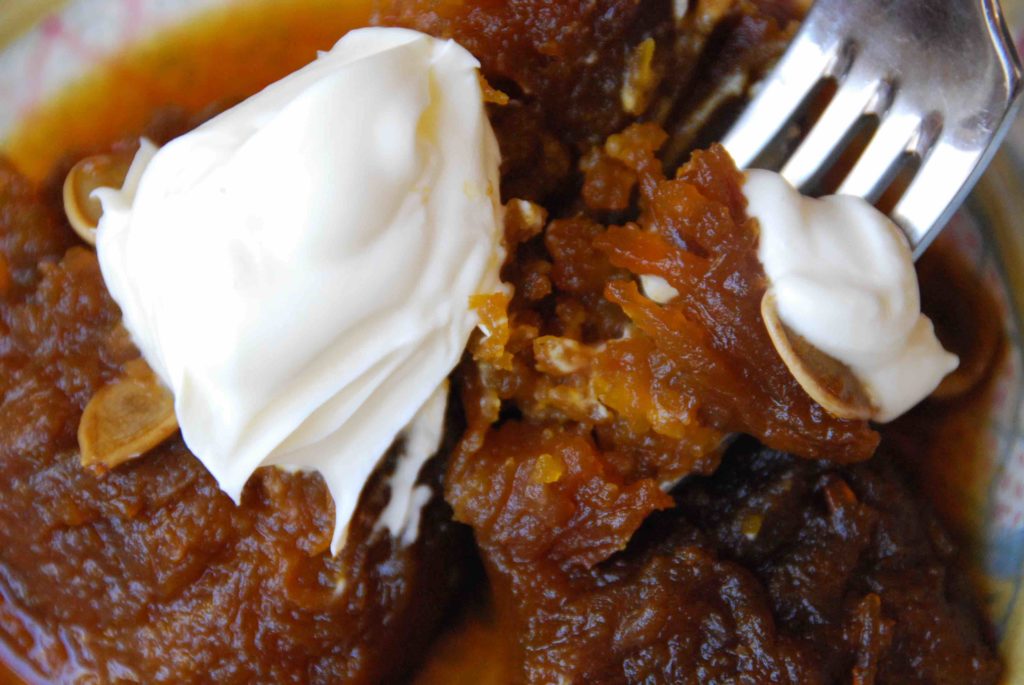 My favorite way to eat it, is with Mexican style cream or Creme Fraiche.

The contrast between the brown, deep, sweet, meaty, soft pumpkin with the fresh, white, cold, tangy cream is hard to describe.

Tacha is a traditional food for Day of the Dead and quite popular throughout the Christmas season. In fact, in the XVII and XVIII centuries, Pumpkin Tacha was a preferred gift Hacienda owners gave to their friends for Christmas. Though the methods to make Tacha have changed, that practice of giving it as a Holiday gift remains timeless.

Traditional Capirotada with Mango and Plantains

Oaxaca is a place I have been to countless times, but always leave wanting to go back.  No wonder I…

38comments inYou have a Pumpkin? Turn it into Tacha!