In Mexico, there are infinite possibilities between two slices of bread. Mexicans are very creative. We’ve come up with all sorts of combinations. From a simple telera filled with mayo, beans, ham, quesillo and rajas to a more complex torta, which involves grabbing a whole different dish, such as tamales or chilaquiles, and incorporating them into the torta.

The torta is part of Mexican culture. It’s difficult for a Mexican to go through a day without saying, thinking about or eating one. On the way to work, I will probably pass by ten different torta shops. My office is four blocks from home. Whenever I walk by construction sites in the city during lunch hours, it’s hard for me not to notice the construction workers making tortas with soft teleras, freshly sliced ham and canned rajas and beans. My mouth immediately starts to water.

Most vendors that sell tortas in Mexico stick to one type, and they work hard to perfect it. Each torta maker has their own trick to making them better than the rest. Whether it’s getting rid of the migajón, brushing butter on each slice of bread, using a certain brand of mayonnaise or sourcing ingredients from their hometown. They’re convinced it makes the difference, and they’re right. For many it may seem simple to make a torta, but it’s the care and dedication of each ingredient that makes the difference.

My most recent torta experience was at Tortas Atlixco. The small, yet revamped, hole in the wall torta shop opened up in December 2016 and is owned by Arturo Ibarra, a Mexican torta aficionado, Sofía Aguilar, the owner of a creative branding firm in Mexico City and New York, and Juan Ángel Cordova, a Mexican entrepreneur. Arturo lived off tortas in Spain for years and has tried and experimented with all sorts of tortas. He’s managed to sophisticate the traditional Mexican torta at his tiny six seat shop. 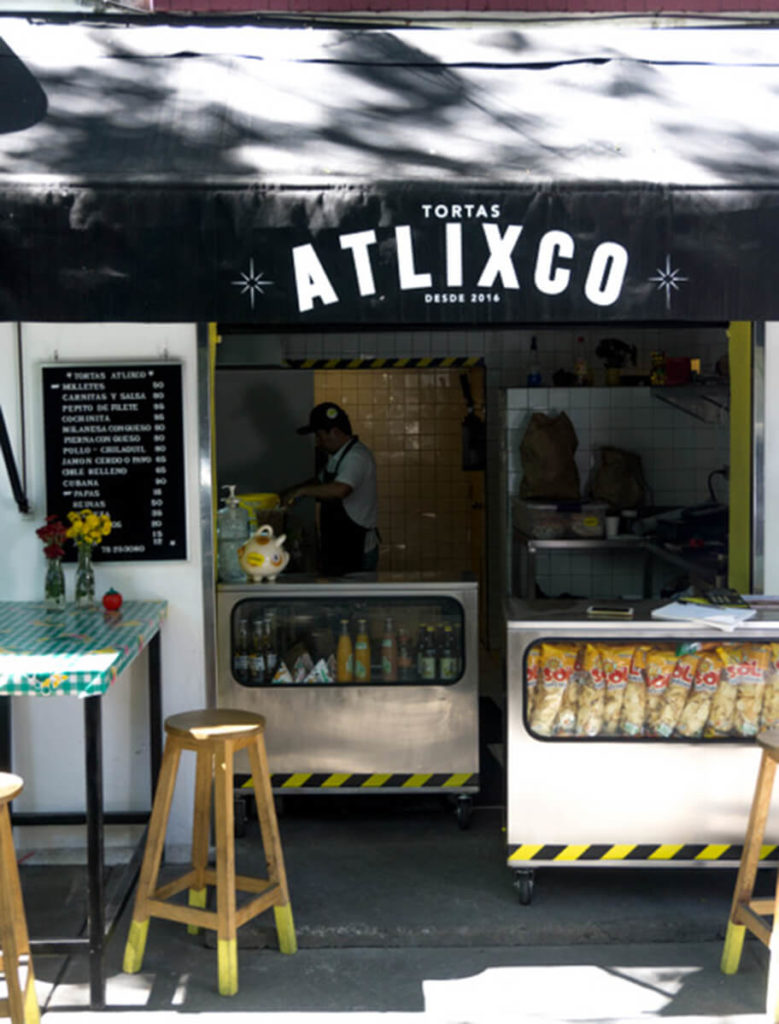 To start off, the team at Tortas Atlixco has gone as far as to reach out to one of Mexico’s most recognized chefs, Elena Reygadas, to create a special, rustic and thick-crust sourdough bread exclusively for their use, as opposed to a traditional soft and airy bolillo or telera. If you’re familiar with the food scene in Mexico City, you’ll know that Elena is one of the most esteemed bread makers there is in the country and dedicates a lot of her time to perfecting the fermentation process of her creations. She was awarded Latin America’s Best Female Chef in 2014 by San Pellegrino and her main restaurant, Rosetta, is on the San Pellegrino list of Latin America’s 50 Best Restaurants year after year.

The menu at Tortas Atlixco ranges from milanesa to chilaquiles tortas. Each is unique and the ingredients sourced will not travel more than ten blocks to arrive at Arturo’s kitchen. I quickly chose the chilaquiles torta off the menu. Each bite was memorable. The green tomatillo sauce was spicy and perfectly seasoned, the fried tortilla strips were crunchy, the breaded chicken was moist and the fresh cream, quesillo and thinly sliced red onion gave the torta a lot of flavor. Indeed, Elena’s sourdough is what brings everything together and is what makes Tortas Atlixco unique. Arturo has succeeded at maintaining the torta tradition, while improving only certain components he considers necessary to create a revolutionary torta.