When I was in high school in Mexico City, Tecamacharlie’s was one of the most popular meeting spots. The name came from Tecamachalco, the neighborhood where it sits tucked away in a corner, and the chain of Restaurants it belongs to, Anderson’s Carlos & Charlies. There, my friends and I would meet some Friday afternoons after school, to have a late and long lunch or comida and embrace the weekend.

Even before school started those Friday mornings, there would be one thing in my mind: Tecamacharlie’s top notch Caldo de Camarón. A rich and thick soupy broth made with dried and salted shrimp, and seasoned with a base of Guajillo chile sauce.

A soup so flavorful and filling, it was served as a courtesy as soon as you finally sat down in that incredibly busy and loud place. The waiters brought it out of the kitchen still simmering, served in a little caballito, the little glass shots used to serve Tequila.

There were plump limes already quartered at the table, waiting to be squeezed into the soup before you drank it in one gulp. If you were lucky, the bottom of the shot had a shrimp, and maybe a couple pieces of potato and carrot. Then you could stick your fork or finger in there, to eat those little treasures that tasted like adventures at the sea port. Far away from the City. 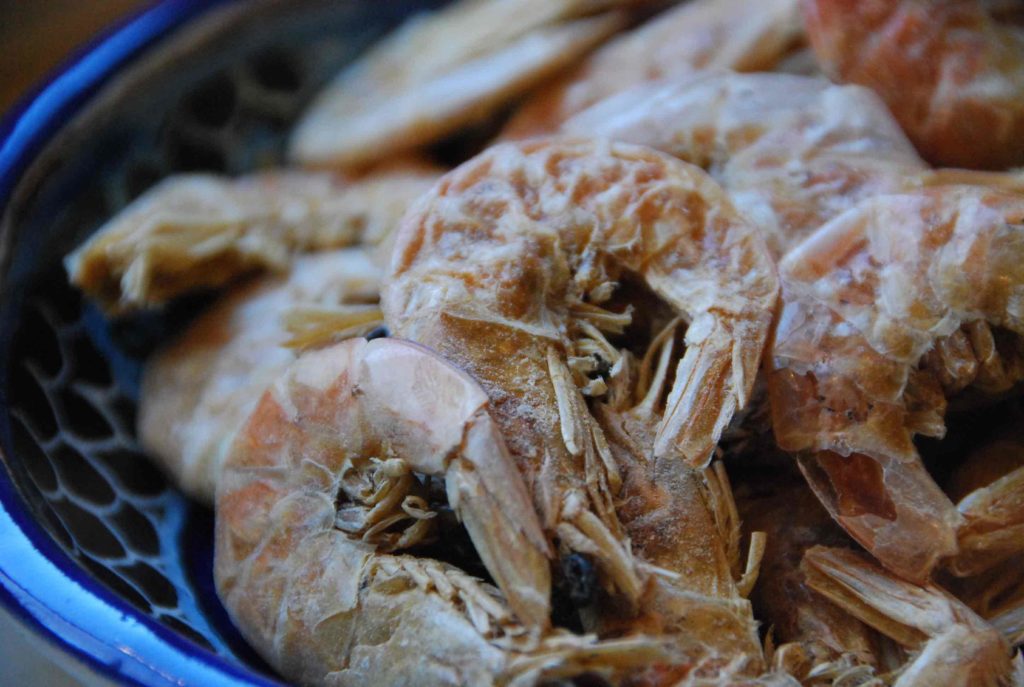 That was 20 years ago and I haven’t been back to that Restaurant since those teen years. So I can’t vouch for how good it is these days… Plus, nostalgia has its way of overpowering memories sometimes too.

But one can find that Caldo de Camarón, with slight variations in many restaurants in Mexico city, and it is even more popular throughout the long Mexican coasts.

The latest one I’ve tried and I think even a better one, regardless of the power of nostalgia, is at one of the Guadiana Restaurants, which I always visit each time I go to the city. 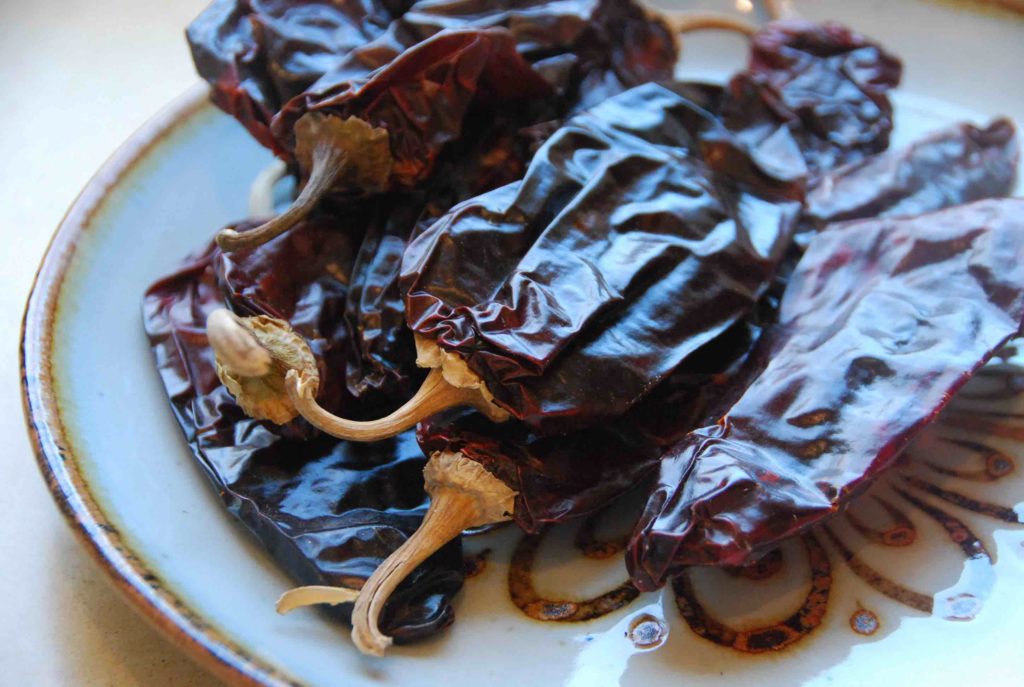 As much as I have looked, there is no Caldo de Camarón to be found around DC. But one can find the handful of ingredients that the soup calls for. Although they are just a handful, they have enough personality to power a rock band.

The dried shrimp, of course, pictured above. Which need to be soaked for 5 to 10 minutes, as they have been salted not only to concentrate their flavor but also to preserve them, so the salt is, truly, intense.  Then the shrimp are rinsed and cooked in water, creating a broth which provides the main and matchless flavoring of the soup.

Then, the Guajillo chiles, with their mild heat and crowd pleasing taste. After they are quickly stemmed, seeded and toasted… 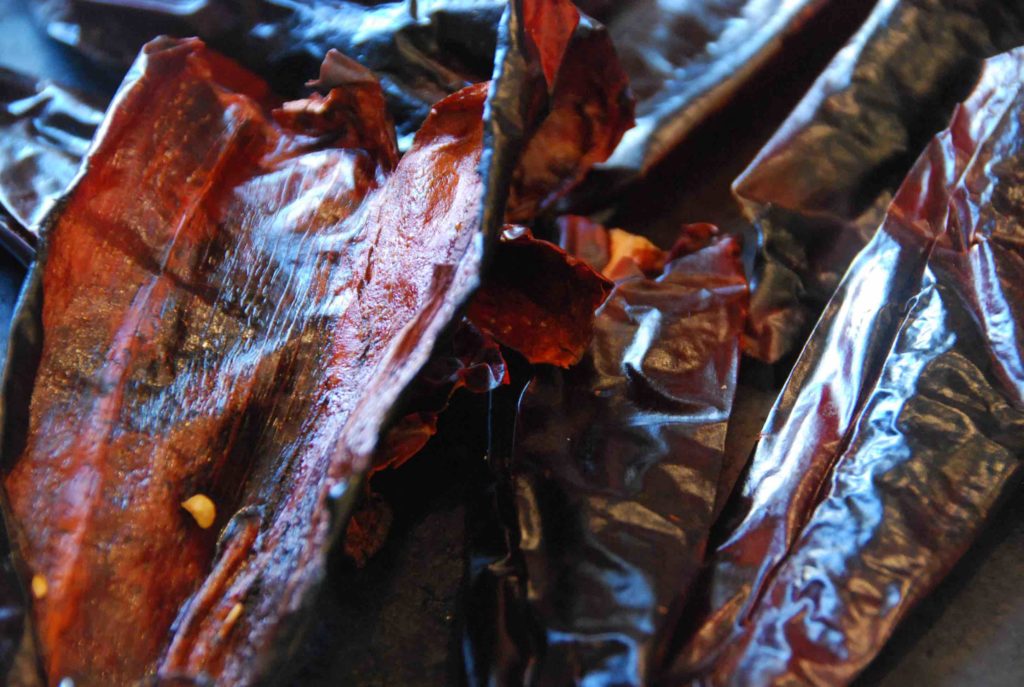 They are then simmered with one of Mexico’s workhorse combinations: onion, garlic and tomato. Some people add parsley to the mix. Some add Bay Leaf, like me. 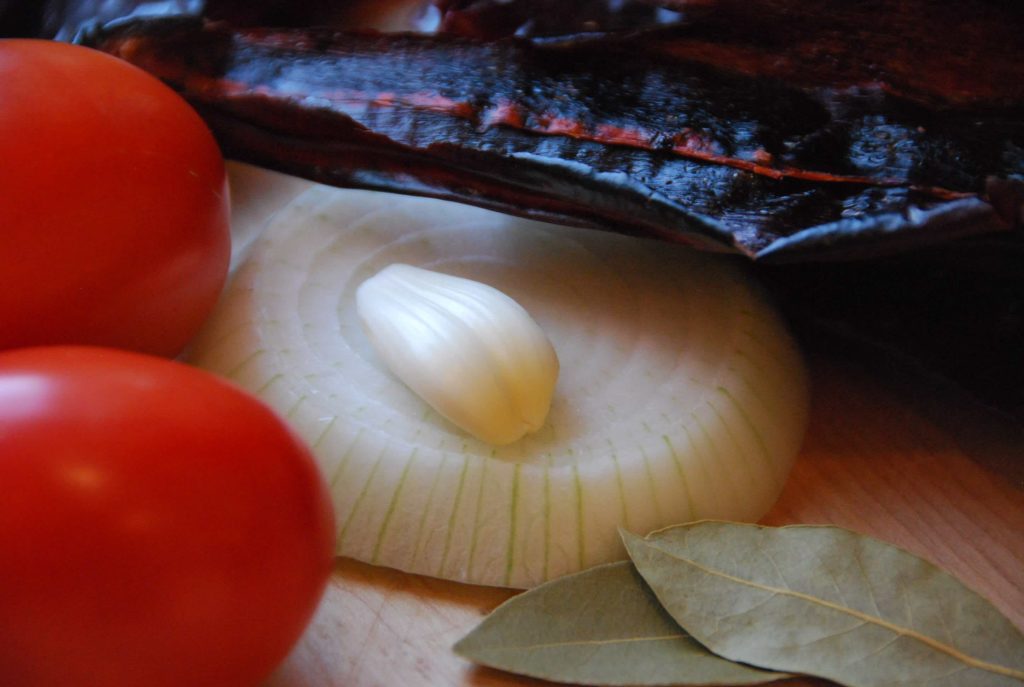 That goes into the blender, and then strained into a pot with some hot oil waiting to season the mix. 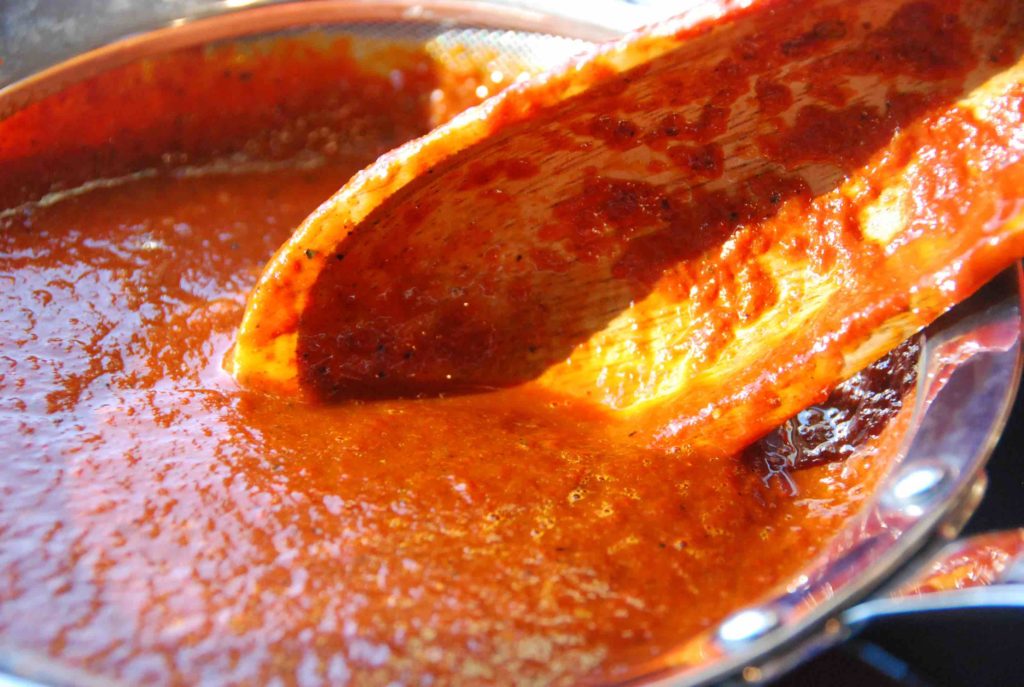 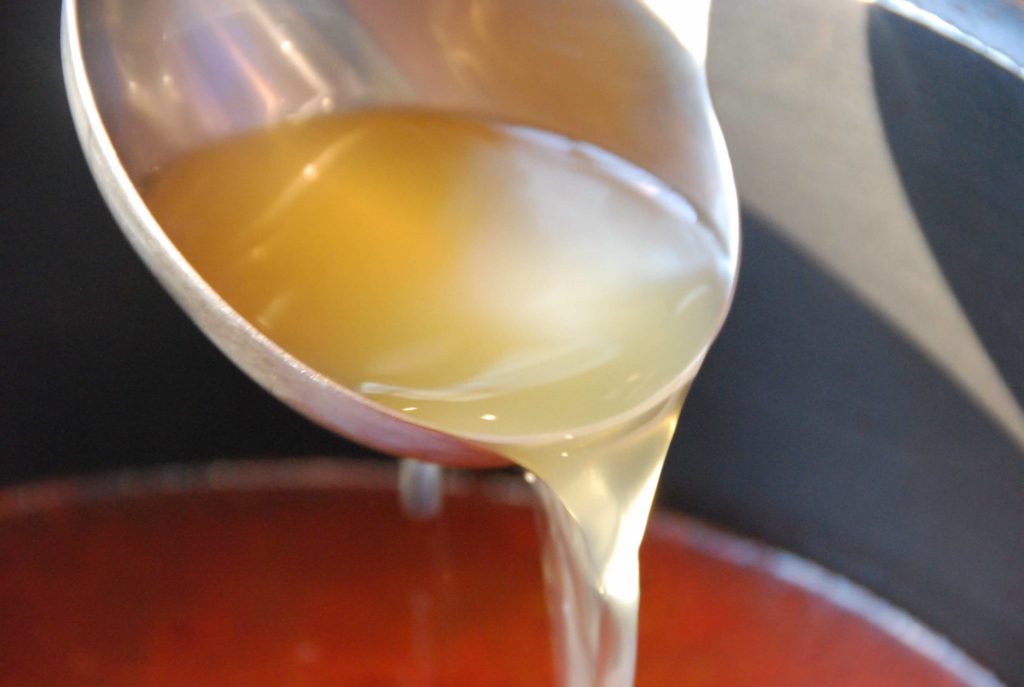 The traditional cubed potatoes and carrots…

I like to add more than the usual recipes call for, so that neither me nor my guests have to be hunting those little soft chunks in the soup bowl. 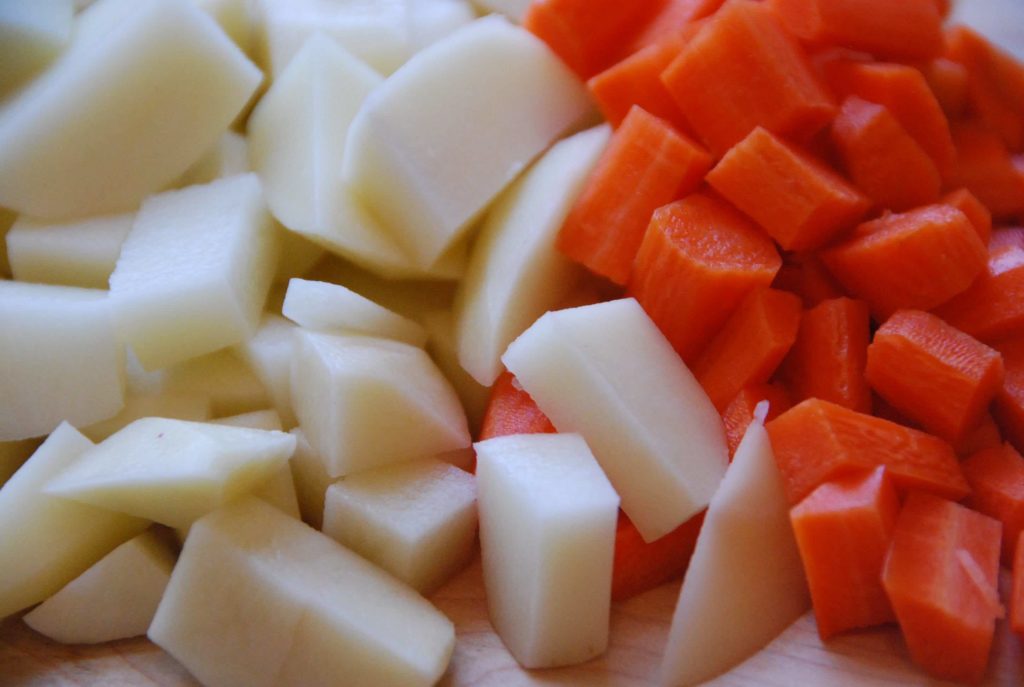 When the shrimp have cooled, remove their heads, tails, and legs. Most cooks keep the shells on. They are a salty and crunchy addition in the soup. However, you can remove the shells if you feel like it. For a softer feel. Then cook for 10 more minutes so all of the flavors can come together. 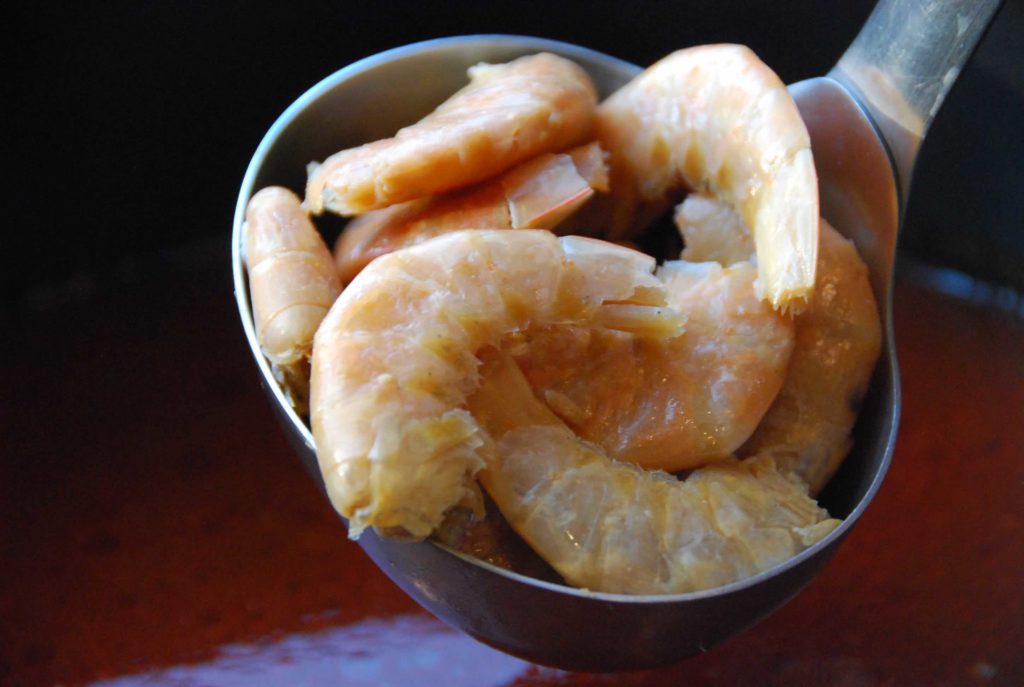 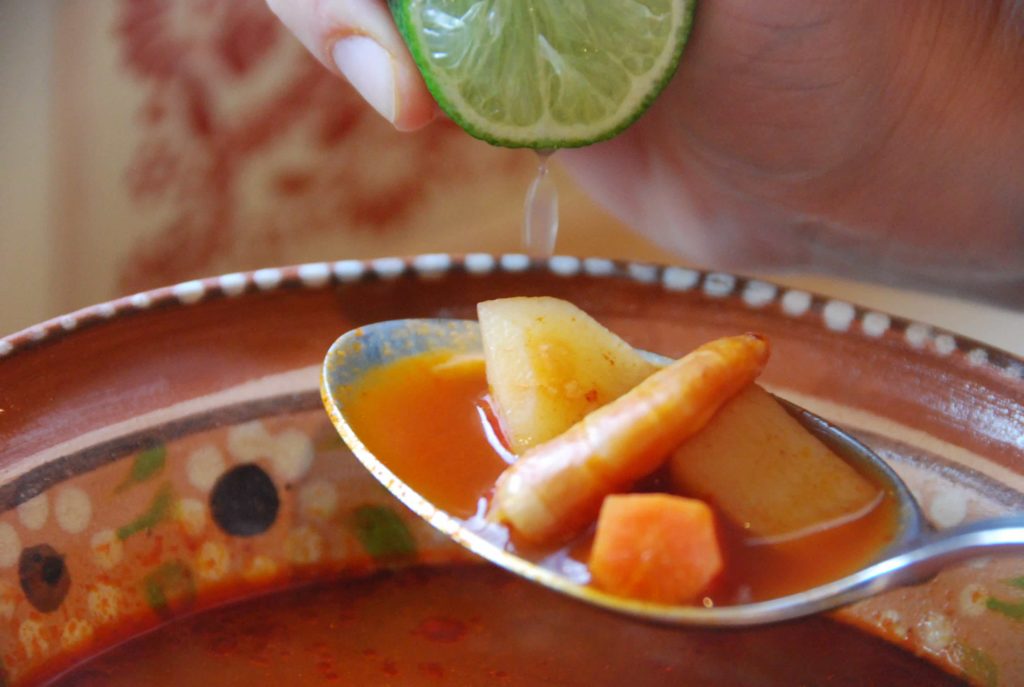 That fresh squeezed lime juice is what makes all of the flavors in the soup, truly shine.

58comments inWhere to Find Caldo de Camarón? Make Your Own…