An essential cooking tool in Mexican kitchens, a comal is a flat plate or griddle, typically made with cast iron and a rim around the edges. They are usually round and found in many sizes, though there are some rectangular versions too. There are also comales made with aluminum, and in later years it has become quite popular to use the non-stick/teflon versions as they are more user friendly.

Comales were traditionally made, for centuries, with clay. In the countryside there are plenty of homes and fondas that still use clay comales and tend to have one for making tortillas and corn masa foods and another for charring or toasting vegetables and spices.

Here you can see the three different types of comales. In the back is a rectangular teflon, followed by an aluminum comal which is happily showing seasoning and aging signs, and up front is an old cast iron comal. Whichever comal you have, clean it lightly, with warm water, soap and a gentle sponge, so that if it is cast iron or aluminum it will slowly season, and if it is teflon it will not scratch.

Here is a more close up view… 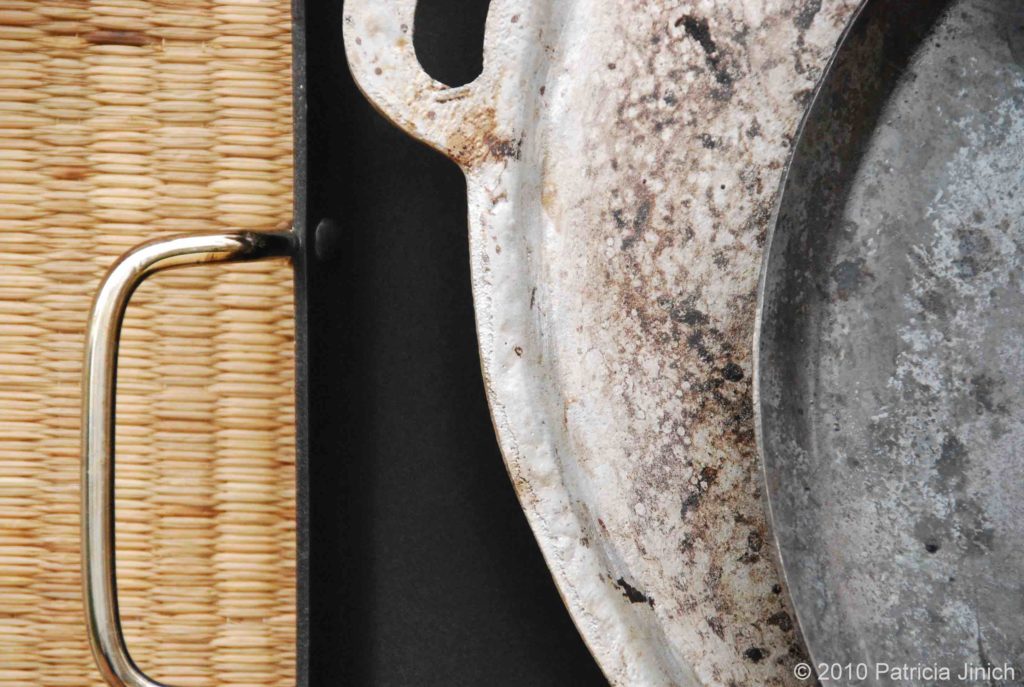 Comales tend to be passed down through generations and are deeply esteemed. The comal that I treasure the most, up front in the above photos, comes from my mothers’ kitchen. It has about of 40 years of cooking life, has a beautiful black color with dark brown areas and it is not completely flat. It has dents, chips and texture developed through time and travels, which speak its history every time I cook in it.

When I went to Yucatán in December of 2008, I got a very large silver colored aluminum comal which is already starting to develop blackened areas throughout, but it will take a while for it to be seasoned and to flavor foods as intensely as my older comal.

Comales are used for many things such as cooking tortillas, sopes, quesadillas and other related masa foods; charring tomatoes, tomatillos, fresh chiles, onion and garlic; toasting seeds, nuts, dried chiles and other spices; cooking vegetables like nopales or catcus paddles, corn, big texas style onions and scallions, among other things.

You can find comales in international, Asian and Latin stores, as well as on the web. Or, you can substitute a comal with any other kind of cast iron plate or griddle or a heavy dry skillet, preferably non-stick if making tortillas.

However, there are benefits from having your own comal.  For one thing, as other Mexican kitchen tools such as molcajetes, aluminum and cast iron comales age with you, season with time and retain a memory of the flavors from their cooking life that permeates future foods cooked in them. Another benefit is that the comal infuses food with a rustic griddle flavor, lighter than a grill or smoker, but peculiar, rich and deep in its own way.

Comales are such an integral part of Mexican cuisine and culture that a town in one of Mexico’s most famous novels is named after it. If you like reading, I recommend it! It is called Pedro Páramo by Juan Rulfo. It tells the story of a man who travels to the hometown of his dying mother, and along the way he runs into a ghost town called Comala, which translates to a place that makes comales. The fictional town of Comala (though there is a real town called Comala too, if not more…) has probably become larger than the novel and even the author in Mexican folklore and culture. It is said that the author gave it this name because the fictional town was eternally burning hot, just like a comal, which is typically used for long periods of time, many times a day and takes a long while to cool off.