Barbacoa is one of those iconic Mexican foods.

Juicy, tender meat that falls off the bone, infused with a rustic, smoky flavor and a jungle like fragrance. It uses a cooking technique that began in ancient times, long before the Spanish arrived, and it lives on to this day across Mexico in places that specialize in making it. Of course, there are accessible homestyle versions too.

Abroad, so many people have heard of barbacoa and want to have a taste of the real thing. The people I’ve talked to that have tried it are dying to repeat the experience. In Mexico it has never ever gone out of fashion, and it is especially rooted in the central part of the country, where I grew up.

True, that barbacoa sounds much like barbeque. Though it is from a type of barbacoa that Americans got the idea to cook barbeque, it’s not the Mexican kind, but the Native American found here in the US, which used to be outdoors and above the ground. In Mexico we call ours barbacoa too (thanks to the Spanish!), but the Mexican way is completely different: the meat is wrapped tightly in banana leaves, cooked for many (so very many!) hours in an underground pit with an initial heating base of burning wood, walls of brick and smoldering rocks that are sealed with a kind of clay, and finally steamed and cooked overnight.

If you haven’t tried it, this is your chance to make it! And no, you don’t need an underground pit, there are ways to go about it and you can cook it away while you are tucked away in your bed… 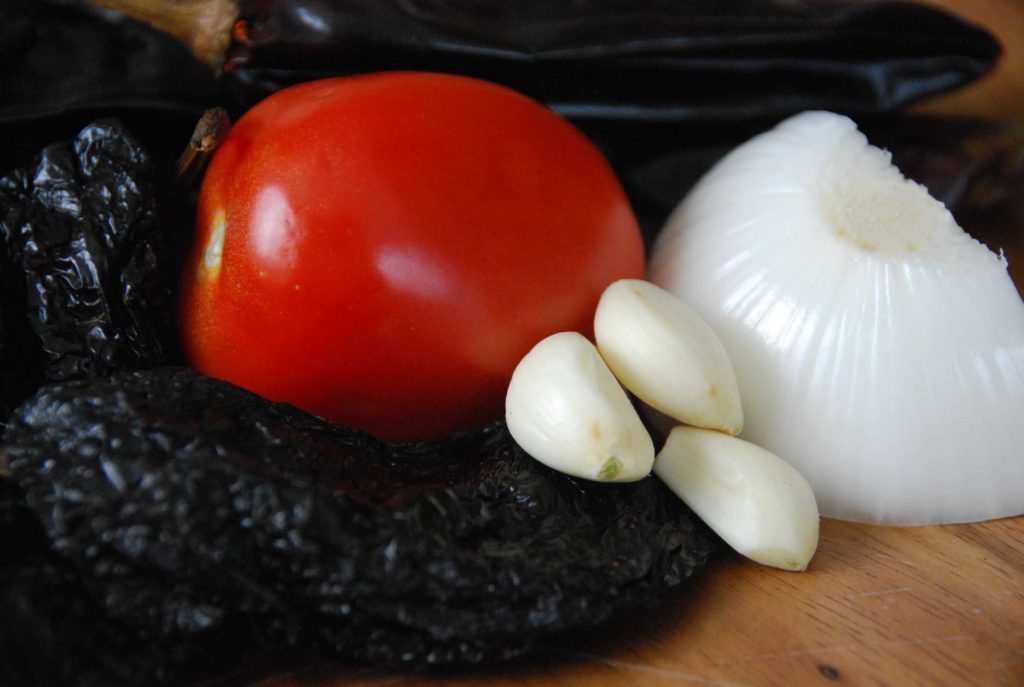 The most common meat to use for barbacoa is lamb, goat or mutton, which fits the rustic nature of the barbacoa so well, as these meats are so gamey. I go for a meaty lamb leg or shoulder, bone in. But there is also barbacoa of other milder meats, even chicken.

There are variations for what the thick marinade of the meat should be. I like to make a version I’ve tweaked over the years based off two takes: one is the basic rub that has been used for decades in a restaurant in Mexico City called El Caballo Bayo -where my dad used to go for take out to make barbacoa tacos some Sundays- and the other contains more spices, vegetables and grains from a recipe that my mother makes, which was passed down from her nana.

You can make the marinade, which looks more like a paste… ahead of time too. Aside from the guajillo and ancho chiles, it has tomato, garlic and onion. 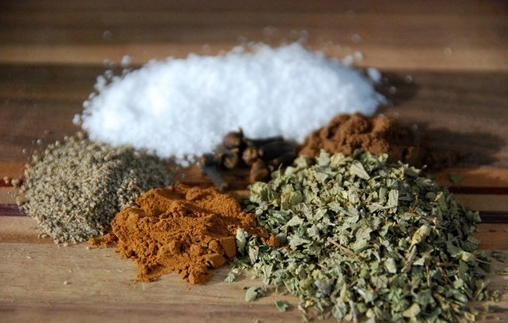 Then it has oregano, allspice, cinnamon, cloves, and a good dose of salt and ground pepper.

The chiles are first quickly toasted and rehydrated in simmering in water. 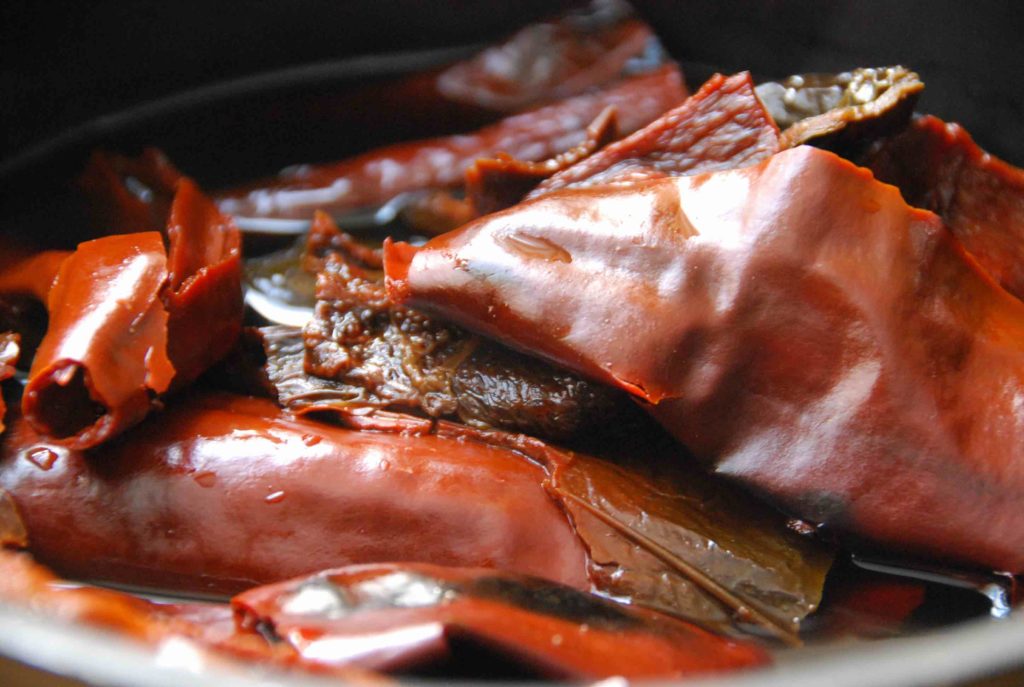 You can of course do whatever you want with the water that the chiles were simmering in, but if you want my opinion: DON’T ever throw it ALL away, EVER! That liquid has a ton of flavor and color, and you really want it in your dish. You really do.

Just look at the depth of color. 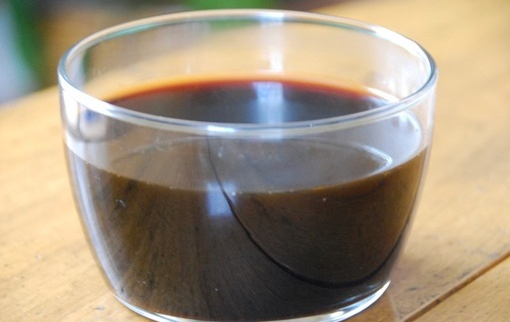 Pour it in the blender along with the rest of the ingredients. 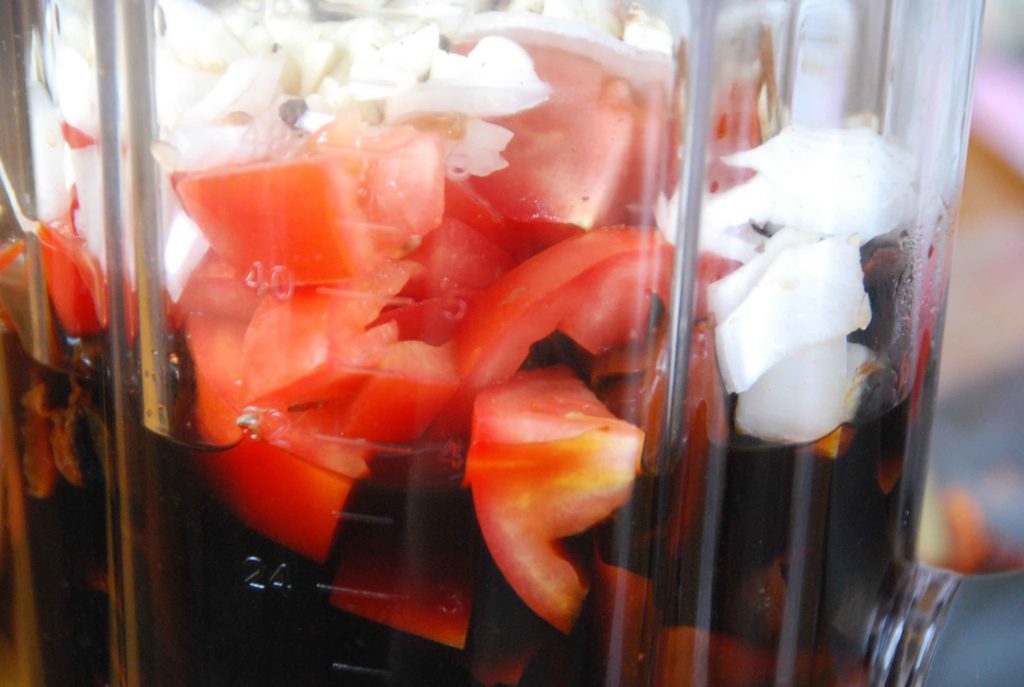 After blending, the mixture should be nice and smooth. After seasoning it in a pan, just letting it simmer down, it should develop a deeper, richer color.

Rub this all over the meat and marinate anywhere from a couple hours to a day. The more your marinade it the better. 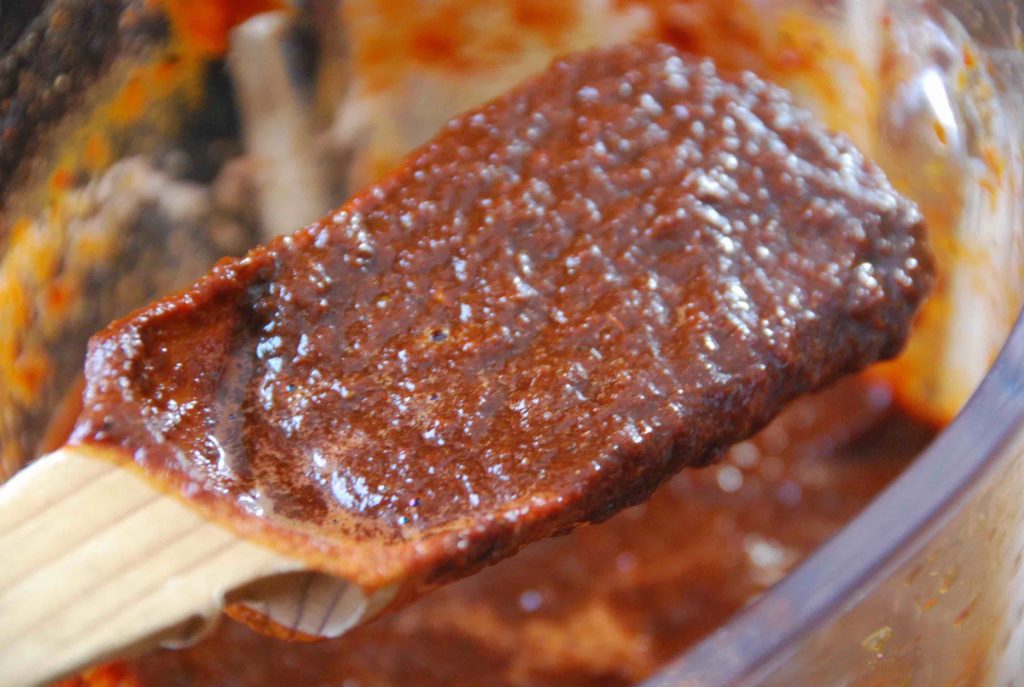 If you want to really give it the rustic kick, place the wet meat on banana leaves, which will help keep it moist and juicy and add a grassy, fresh, aroma and flavor to the meat. The steam bath in the leaves gives it a jungle-y warm flavor; as if you were really cooking the meat in an earth pit. 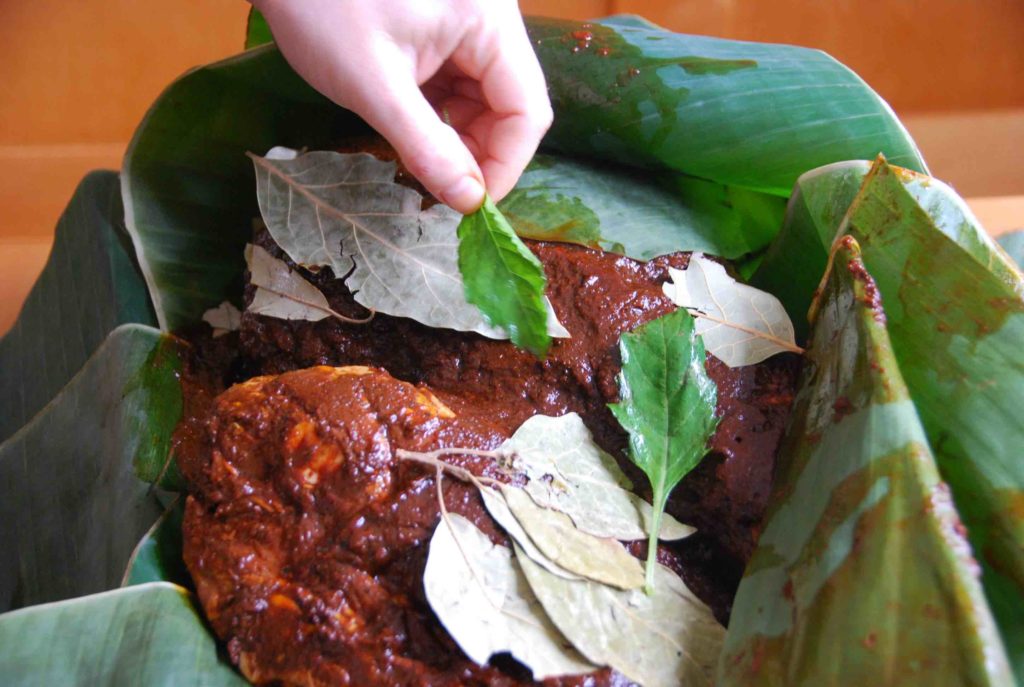 Before wrapping up the meat in the banana leaves, place some fresh or dried avocado leaves on top of the meat. They will add extra depth and a flavor similar to anise (but don’t eat them later!). Again, if you can’t find them, don’t worry, you can skip them. 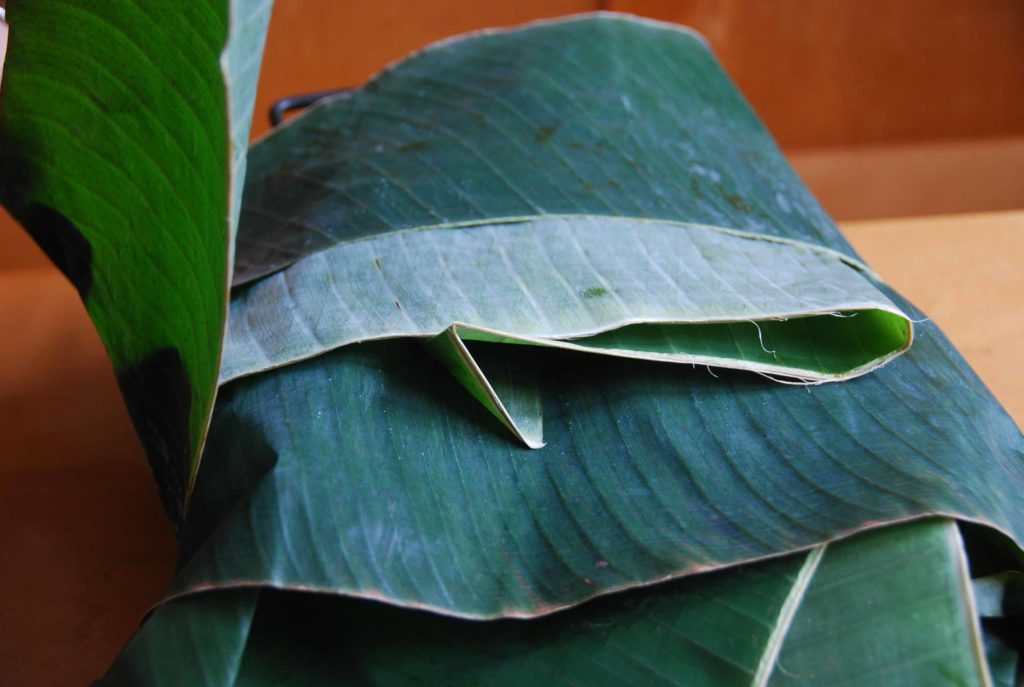 On the bottom of the roasting pan, add all the vegetables: carrots, potatoes and garbanzo beans.

Place the wrapped meat on the rack over the vegetables and as the meat cooks, some of the juices will run out of the bottom of the banana leaves, creating a rich broth for the vegetables to cook in. Those vegetables, after absorbing all that flavor and cooking so long, bring about a lot of depth and sweetness, at the same time. 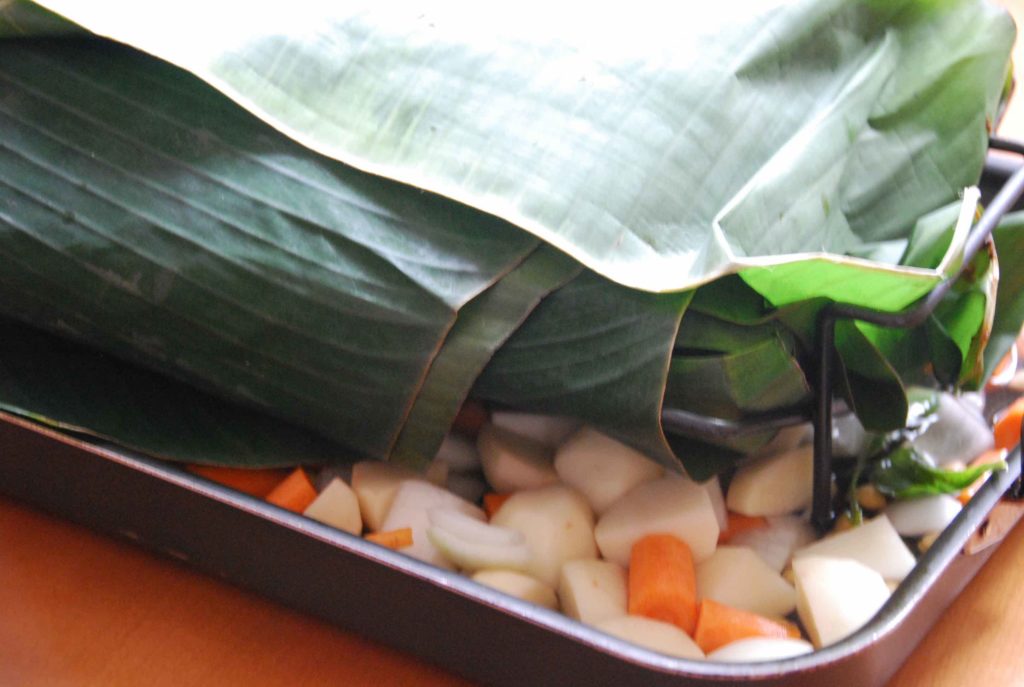 Then wrap up the top of the roasting pan in foil really tight. Remember this is to make up for not cooking it in an underground closed pit. And place it in the oven. Once done, remove the meat from the oven, give it a little time to cool down and unwrap the foil and banana leaves. Be careful, because the steam that comes out will be burning hot. While I love American barbecue in the summer, Mexican barbacoa is a perfect dish for the winter months. Cooking the meat in the oven for hours will fill your home with amazing smells and warmth; not to mention a bounty of incredibly flavorful food.

All you do is shred the meat in big chunks, have the vegetables on the side, invite some friends over and start making some tacos, there is a lot to share here. Dig in!

p.s. It’s even better with some salsa verde on the side.

Note: I researched, tested, tasted, edited and submitted this recipe to The Washington Post for an article published on February 24, 2010.

For the vegetable base:

To make the marinade:

To make the vegetable base:

To make the meat: