Purslane or verdolagas, one of those ingredients that Mexicans hanker for when outside of Mexico, is likely to be growing in your backyard. In Mexico, it is considered one of the quelites or edible herbs. It is nutritious and succulent, yet it has long been considered a weed in the United States. Indeed, once it grows roots, it spreads and grows fast.

It is essential to the cuisine of Central Mexico, where it is most commonly added to Puerco con Verdolagas: my favorite way of eating them. There, slowly braised pork is finished off in a seasoned salsa verde and verdolagas are dropped in almost when it’s done. 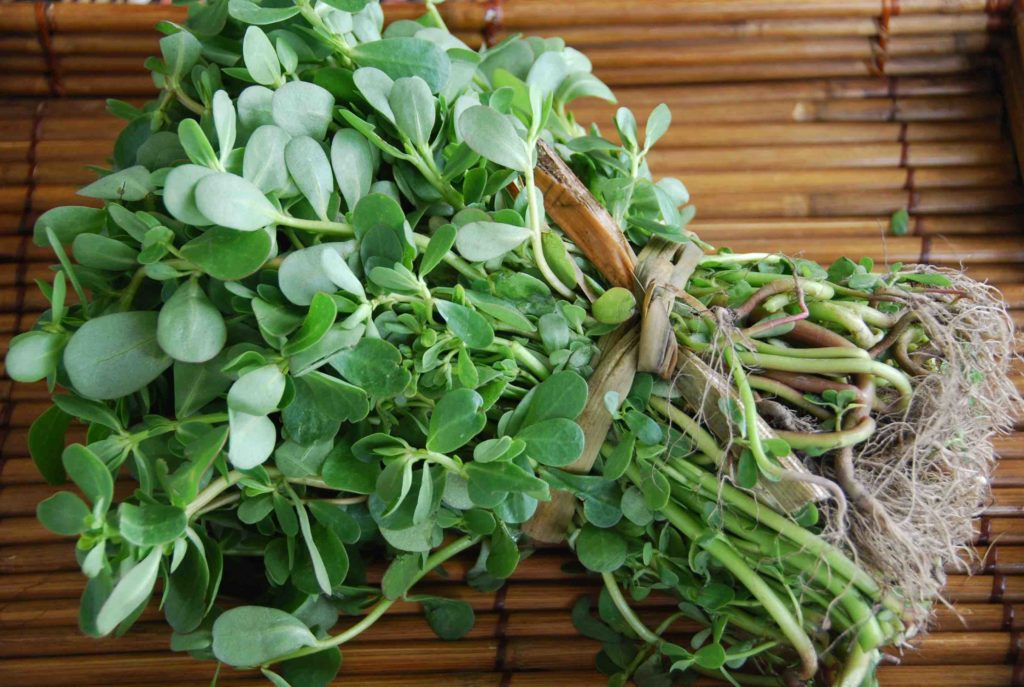 From purslane, almost all is eaten. Only the very lower part of the stems and the roots are removed. The further you go down the chubby stems, the lighter the green color becomes and it can sometimes fluctuate to violet or red.

The leaves are thick and crisp and the stems are crunchy. Both leaves and stems are very juicy and meaty. With a light bitter flavor, a bit lemony and a bit peppery, altogether, punchy and refreshing.

Just like tomatillos, purslane’s tartness pairs well with other ingredients typical in Mexican cooking such as tomatoes and chiles. It is a great complement to salsas and taco fillings. Not native to Mexico, but as you can see, it is an ingredient that over ceturies has grown deep roots.

Though my favorite way to eat them is cooked in that famous pork stew and in vegetable soups, verdolagas are also wonderful in hearty salads. Think watercress, but thicker, crisper, yet more defined and “vegetable” like. They can be prepared just like you would spinach or watercress too. So the options go from soups, casseroles and stews, to salads which can be simply coated with a generous squeeze of fresh lime juice, olive oil and sea salt. You can tuck them into a sandwich and feel like the most interesting sandwich-eating person on your block.

Because studies have shown it to be the richest in omega-3 fatty acids of any leafy green, purslane is increasingly being cultivated in the United States and is often available at farmers’ markets. You may find it under one of its popular nicknames pursley, pigweed or little hogweed. Or look closely, they may be closer to home. If you find them in your yard: cook them up!