You know what happens when you eat a Santa Clara Cookie?

When you first bite into it, you go through a soft layer with grainy texture that tastes like a moist version of marzipan. But as your teeth sink in they hit the hard crust of a buttery cookie that breaks into the crunchiest of chunks in your mouth. It makes for such tasty contrast that you have to take more bites to understand their beauty. Since one cookie doesn’t explain it, you will reach for another one…

There you go! Another sweet concoction from the nuns of the Santa Clara convent in Puebla whose recipe has been passed down for over a dozen generations. Together with the nuns from Santa Rosa Convent (where Mole Poblano is believed to have been invented) and Santa Monica Convent (where many say Chiles en Nogada come from) they are much to blame for the baroque foods, which mixed European and Mexican ingredients with much passion and devotion, that shaped the cuisine of this city – and has made it an epicenter of gastronomy in Mexico.

Yet it was the nuns from Santa Clara who were most famous for their sweets. You can read what the plaque says outside of the standing convent which shut its doors long ago but left behind a strong legacy and a trail of sweets. 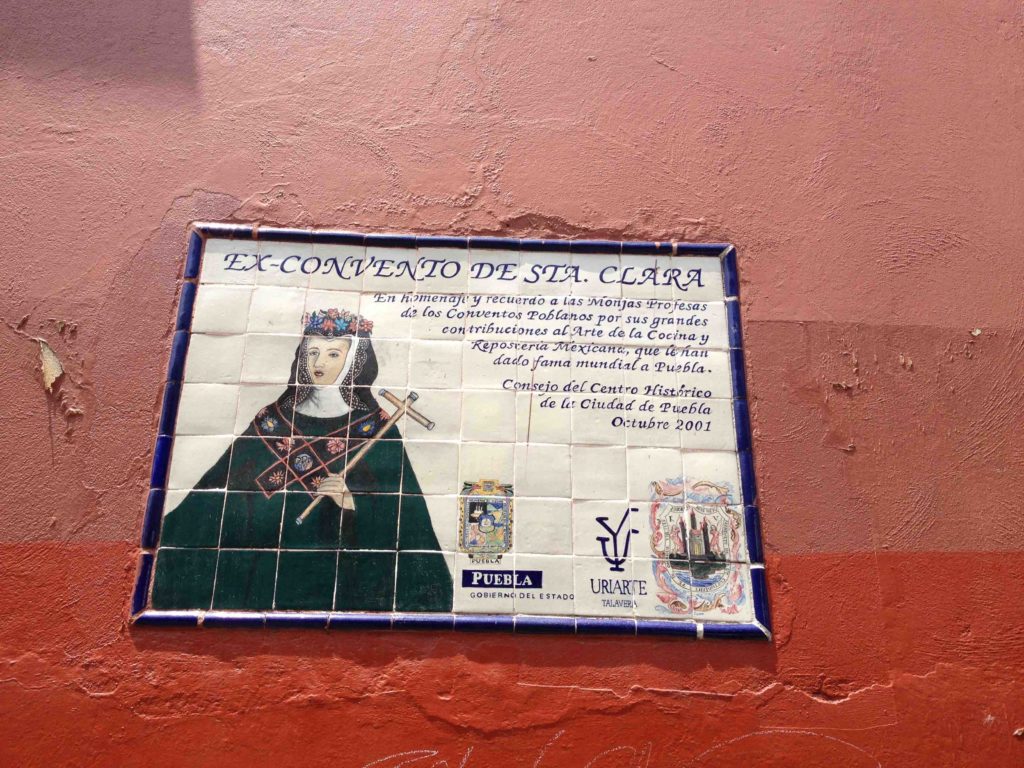 You can eat most of these sweets in the two block-stretch that makes La Calle de los Dulces “The Sweets Street” where the convent stands. There are sweets shops lined one after another selling truckloads of them.

We went down there this spring to film the Puebla Episode for Season Two. I stood on the street in awe and a bit confused (and hurried by the production company too) not knowing which store to choose from and wanting to sample every kind of sweet from them all. 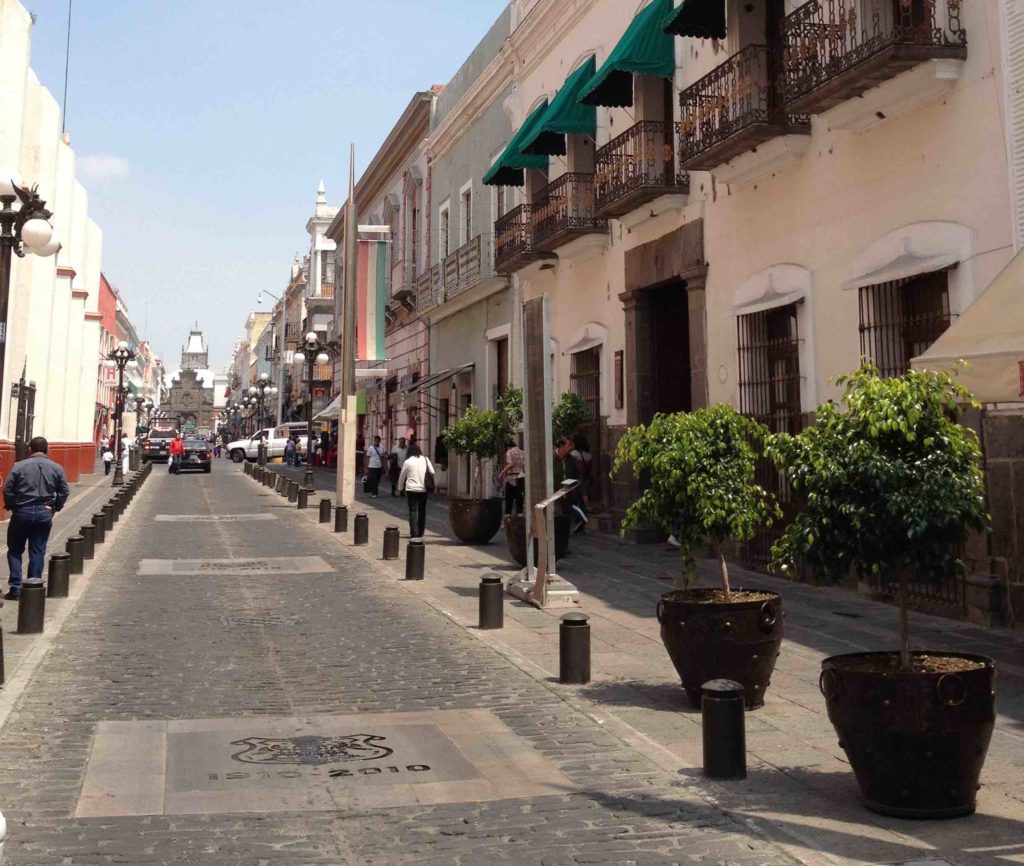 The cookies are sold individually wrapped so the base won’t crack and the thick nutty glaze won’t spread. They come in three sizes: gigantic, normal and small. And yes, I ate the cookies that are missing from this beautiful Talavera platter below, while standing right in the middle of the street, telling the producer that I really needed to eat a few before being able to talk about them in front of the camera.

If you saw the episode, you saw me eating them!

So unique are these cookies, that there are special Santa Clara cookie molds to make them in that exact shape in one swift press. There is also a laborious technique for making the glaze. However, I have tested versions galore in my kitchen and I have a genuine and true short cut that makes any round cookie mold work and an easy way to get the same glaze.

Let’s begin with the glaze.

Traditionally, it is made with Pumpkin Seeds (some companies have gotten away with making the glaze with confectioners sugar, but connoisseurs know not to be tricked!). The thing is, since the Colonial era, the Spanish nuns were keen on making the sweets they knew from back home but with Mexican ingredients. So the pumpkin seeds took their turn in marzipan instead of almonds, hence the Dulce de Pepita. It was a success. The next step was to use this sweet to coat a cookie.

Yet, the laborious part of making the glaze is that pumpkin seeds once hulled are green. Be it for their spiritual beliefs, obsession with purity, or wanting to use same technique as blanching and peeling the almonds for marzipan, the nuns found a way to remove the super thin skins that are completely stuck to the seeds until the seeds reach a shinny ivory white.

To begin with, hulling the seeds out of the outer thick shell is time consuming, we are lucky they are sold already hulled. This thing of removing the thin green skin just complicates it much further… 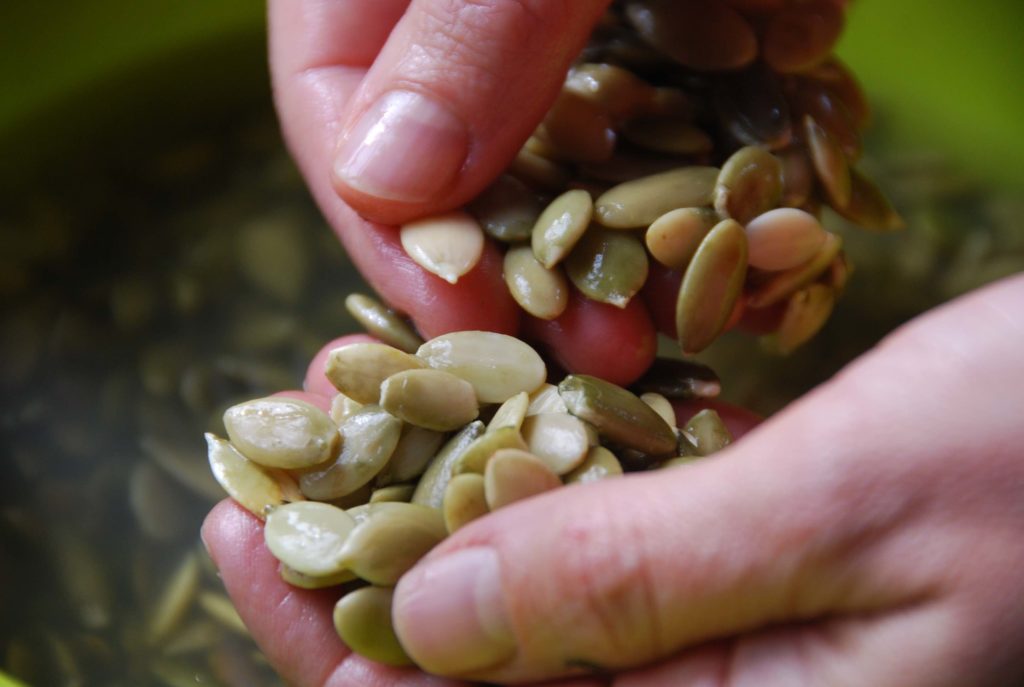 To make the glaze like the nuns, you have to soak the seeds overnight either with slaked lime, ashes or baking powder. Then you have to rub them with your hands to peel away the thin skin. But since that won’t remove the skin all the way, you have to rinse and rub them between clean kitchen towels, many times, until they are completely ivory white.

I am one to have patience in the kitchen, but I don’t think I have the patience of Santa Clara nuns… 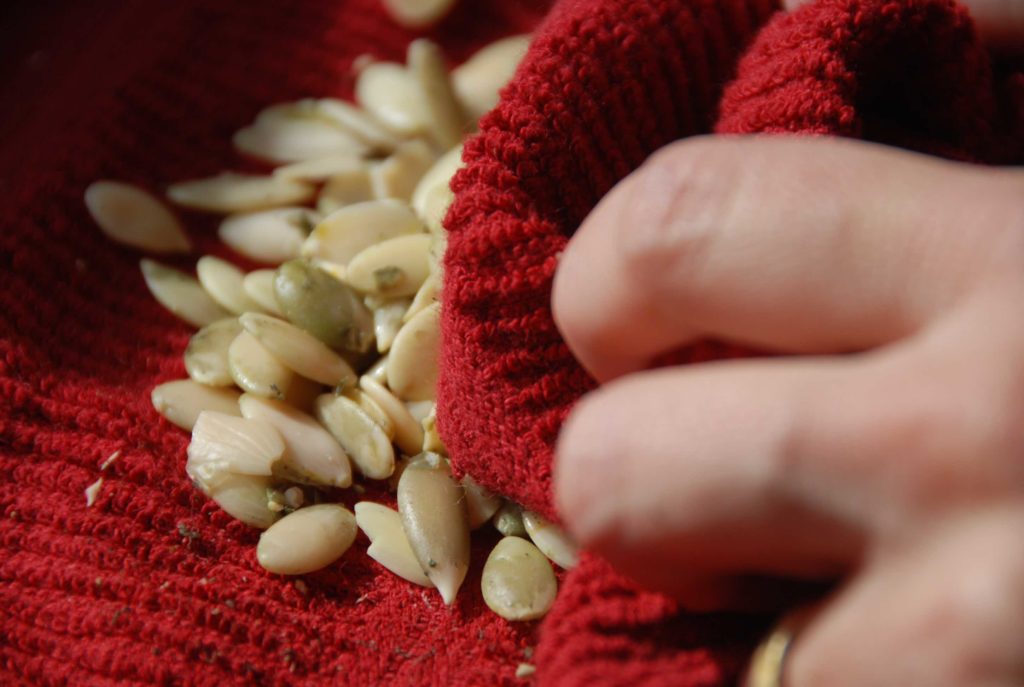 I don’t know if the nuns knew then just how healthy and nutritious the pumpkin seed skin is. But if you leave it on, you have a glaze that is just as fabulous but with a light green color. Of course you can test your patience and try the technique for making them ivory white, but if you insist on making a white glaze and don’t want to spend the hours rubbing the seeds, you can substitute the green pumpkin seeds for white slivered almonds!

Whichever nut or seed you decide to use, peeled or not, you need to grind them in a food processor or blender. That is easy enough if you don’t have to peel them… The rest also goes easy as pie.

Make a syrup by mixing water and sugar in a medium sauce pan. 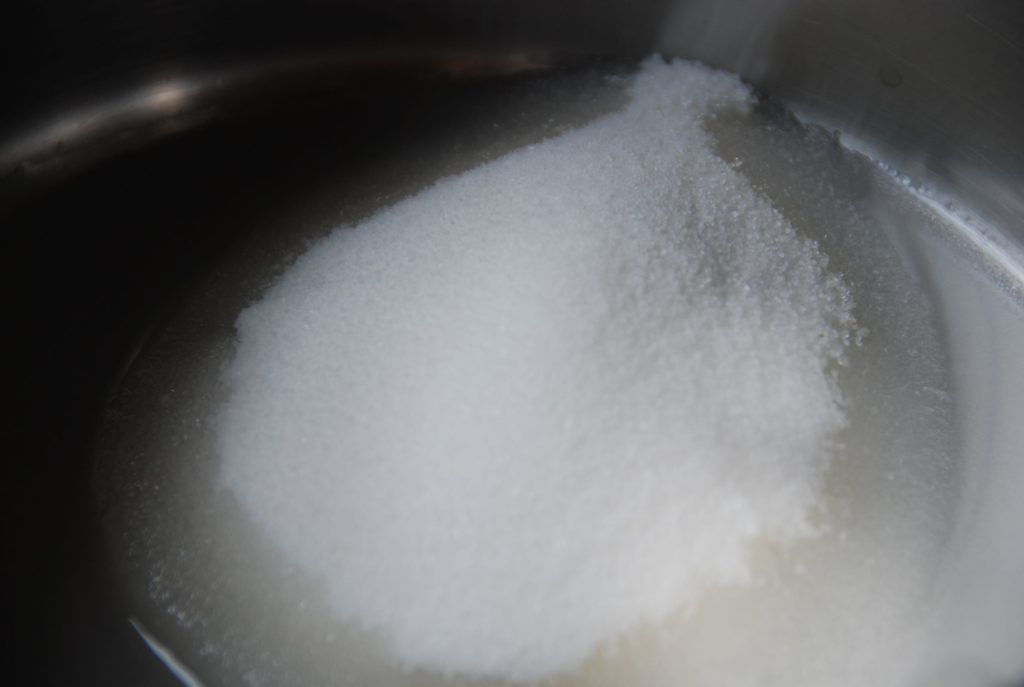 Once the sugar dissolves, let it thicken to a light syrup, about 10 minutes. See below, just until the syrup drops begin taking their time letting go of the wooden spoon. 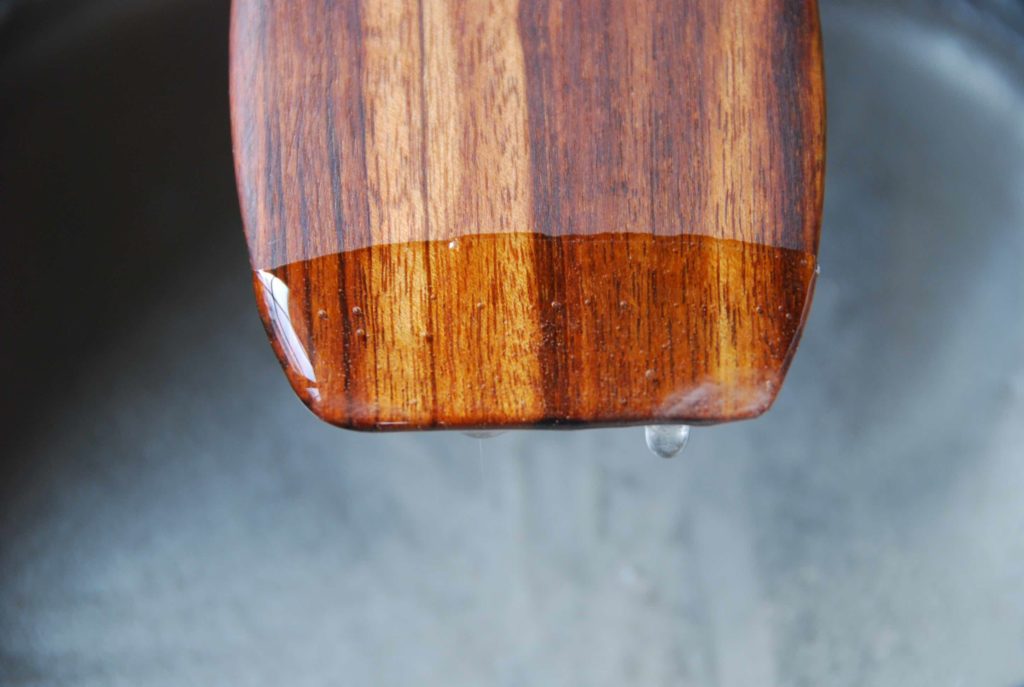 Add the ground seeds or nuts and mix with the syrup and cook for about 3 to 4 minutes. Lastly, add a splash of milk. It makes the glaze be shinny and beautiful, almost like a mirror where you can reflect your soul in: just like the nuns liked it! 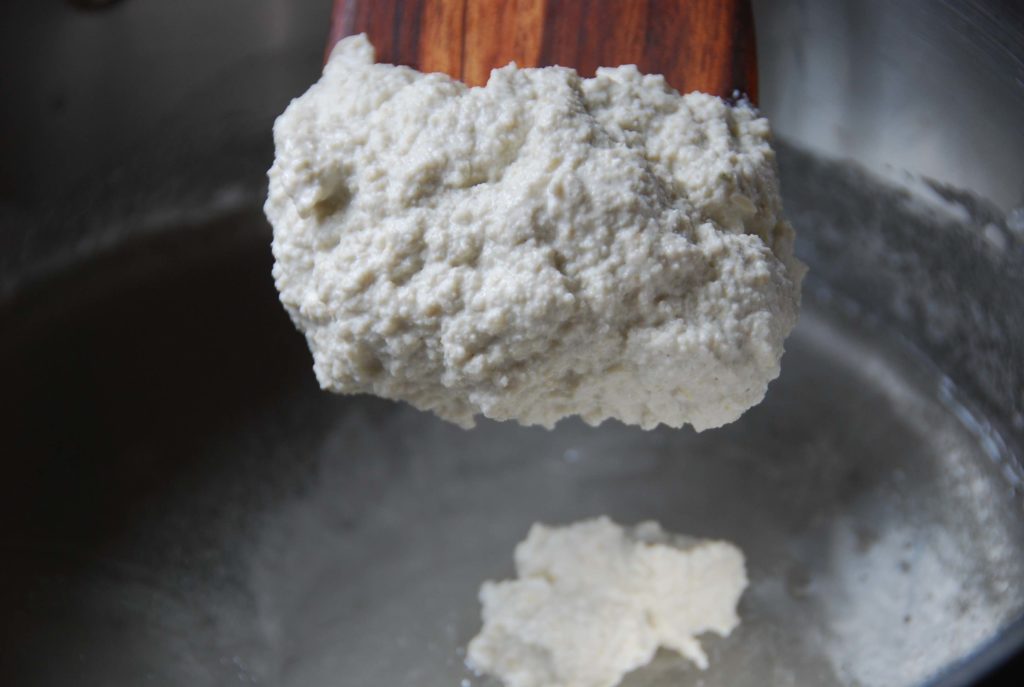 If you go to Puebla and find a special Santa Clara Cookie mold that’s great! If you don’t, fear not. Spread the dough and grab a round cookie cutter. 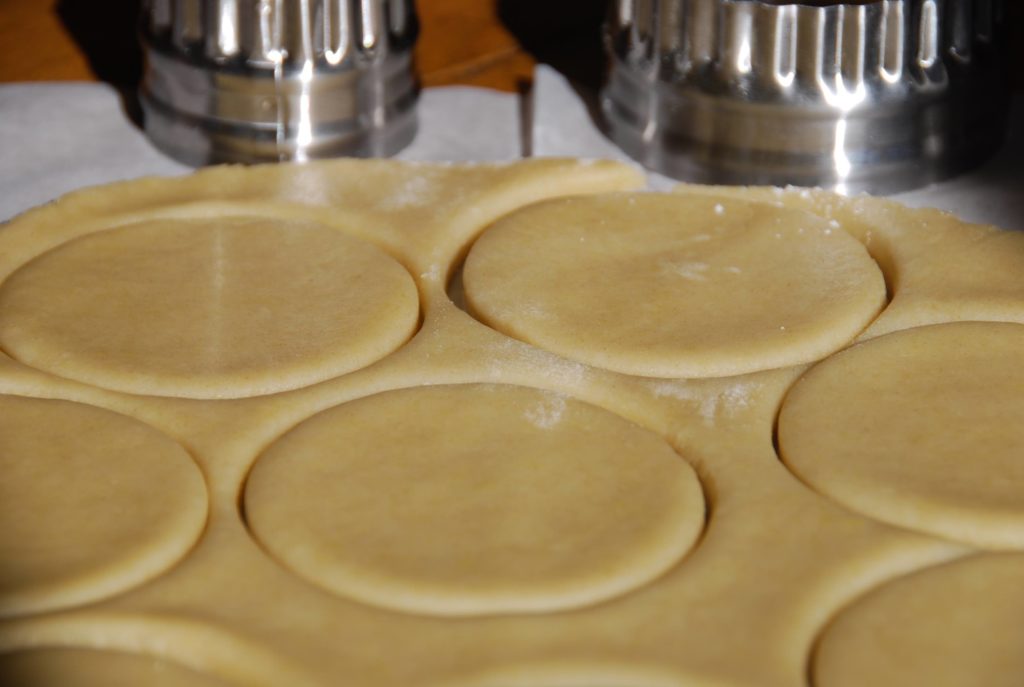 Then use the cookie cutter next size down… Press inside each circle, but don’t go all the way down. That will give you a border to decorate but also a boundary for the glaze to be contained. 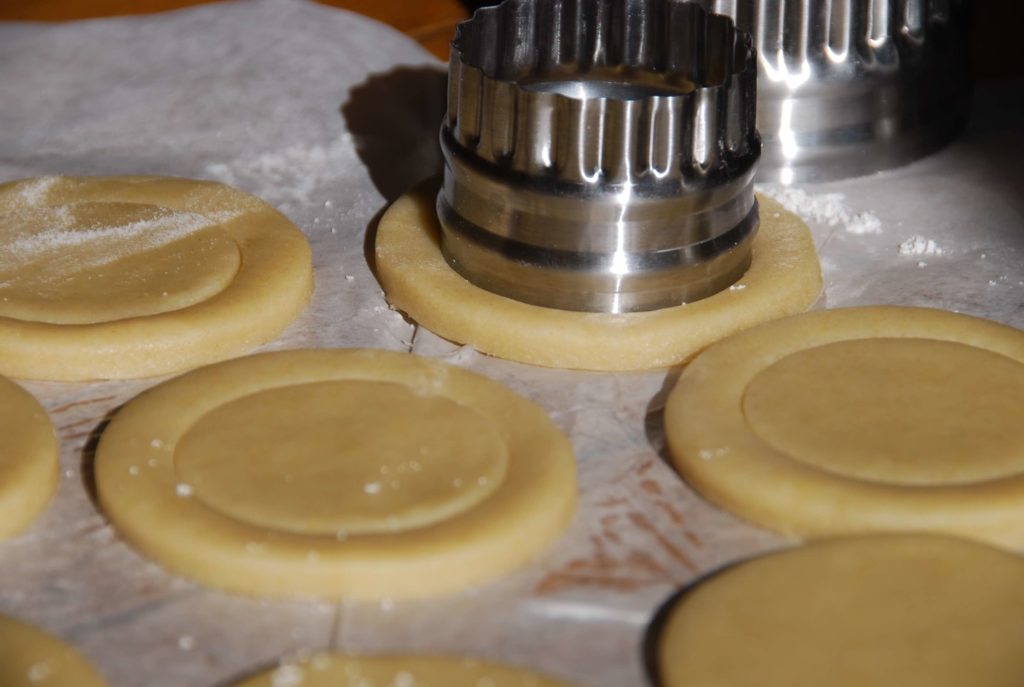 Decorate around the border with a fork. 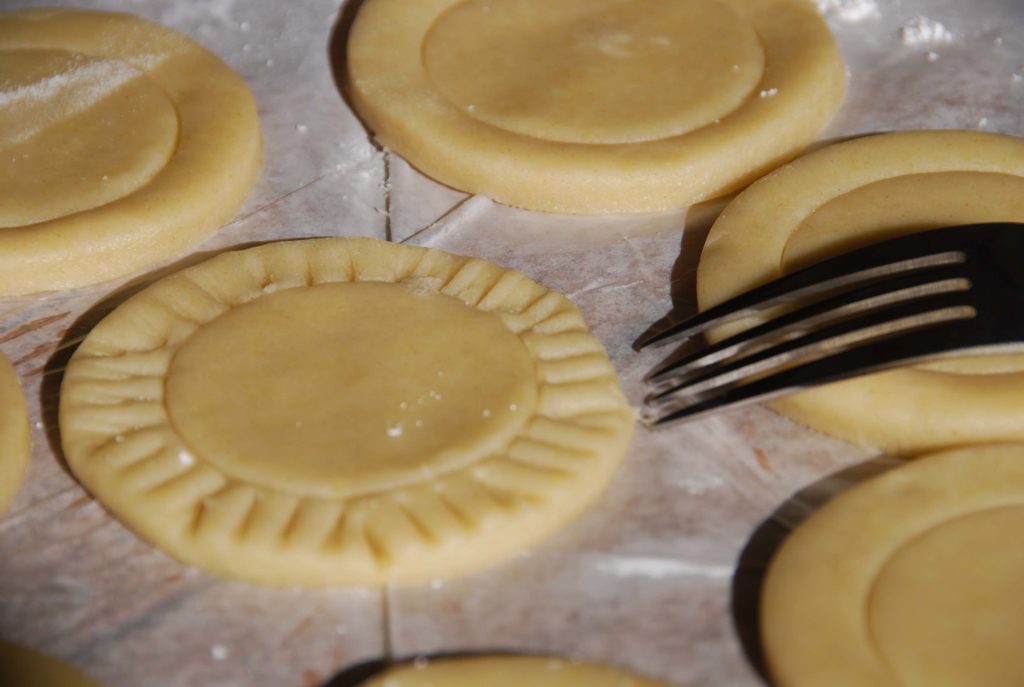 Let them cool completely and add the thick glaze on top. Wait until both the cookies and the glaze have cooled down or the glaze will run all over the cookies. You can make both things ahead of time… 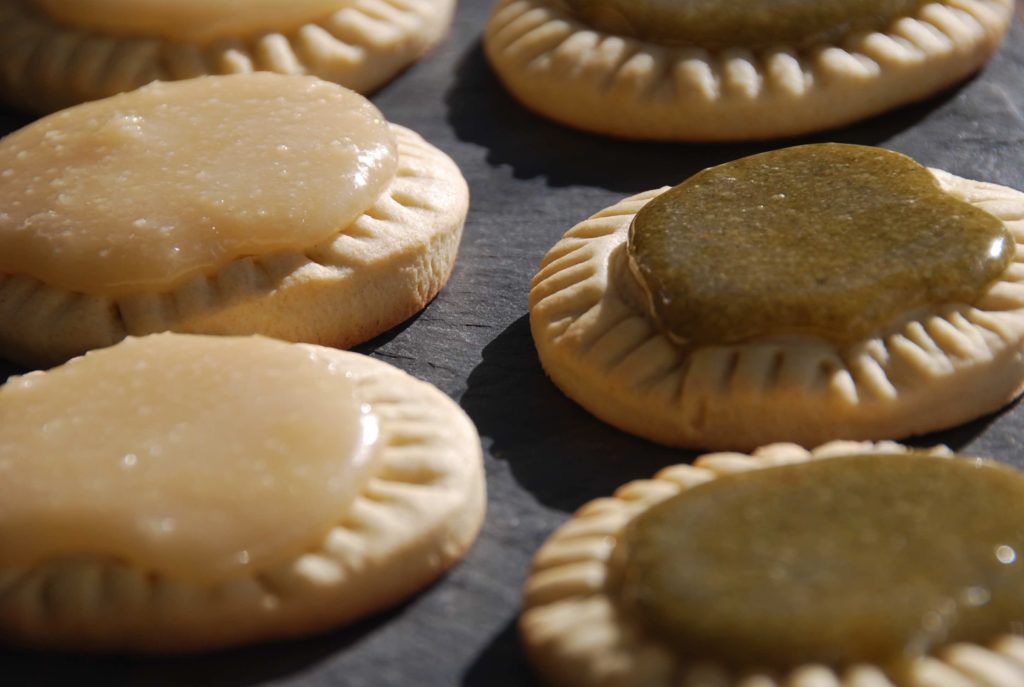 Which one looks prettier?

As it is well said: Beauty is in the eyes of the beholder. You choose. In any case, don’t wait to get to Puebla, until you do, give these a try.

To blanch the pumpkin seeds:

To prepare the dough:

To prepare the glaze: