Before she died, my maternal grandmother, whom we called Lali (remember I’ve told you about her before?) gave me Gloria Miller’s Thousand Recipe Chinese Cookbook. She was fascinated with Chinese cookery. She was also very good at it. What she loved the most were the stir-fry dishes: fast, tasty and healthy.

So, she bought herself a wok.

I couldn’t begin to count how many wok-made dishes I ate at her house during those long summers I visited her and my grandfather, after they moved to the Californian desert.

After she passed away, that wok found its way into my kitchen. I’ve cherished it. I’ve prized it. I haven’t used it! I’ve dragged it through so many house moves that I’ve also managed to lose its cord. It’s an electric wok. It’s real pretty, too. It’s hers. And in my mind, it is inseparable from her Miller’s cookbook, so I didn’t try to cook “her” Chinese dishes for years. And here and there, I’ve looked for that cord…

Fast-forward many, many years. You know I am on a continuous mission to find fascinating topics to teach for my culinary program at the Mexican Cultural Institute in Washington, DC. As we planned this year’s classes, the topic came up: Asian Influence in Mexican cooking.

As a former Mexican policy analyst, I am very familiar with the history of the 250 year-long Acapulco-Manila trading route, which connected China and Mexico early on. How tasty would it be to build a menu that showcased the influence of Asian populations in Mexico, and the beautiful fusions of their cuisines and ours?

The Chinese and the Filipinos were the first ones to come to Mexico, through that Acapulco-Manila trading route, which was the result of the Spaniards’ thirst for more than gold, for more than silver; it was their thirst to find what they called the “Spice Islands.” Find them, they did, in Manila.

For 250 years, huge Spanish-built Manila Galleon ships (known in Mexico as Naos de China) were the means of an incredibly rich exchange that forever changed the culture and cooking of Mexico and Asia. Through trips that lasted for more than six months and carried more than 600 people, in came silk, porcelain, exotic fruits and herbs, huge amounts of spices and new ways of preserving ingredients and cooking techniques; out went tomatoes, zucchini, corn, chiles, avocados, beans, Mexican herbs and many culinary traditions.

Like many in the Chinese populations in Mexico, my grandmother was an immigrant. She moved to Mexico City from her native Austria, by boat as well, and in her kitchen, became fluent in bridging Austrian and Mexican food. Much in the same way that Chinese immigrants, have built bridges between their cuisine and Mexican food – adapting dishes to use ingredients from the nearest market (jícama instead of watercress, anyone?) and to please the tastes of their Mexican neighbors (chile peppers, please…). It seems to me that it was an understanding and solidarity amongst immigrants that inspired my grandmother’s great appreciation for Chinese cooking.

Well, not only was my grandmother fascinated with Chinese cooking, but a gazillion other Mexicans are, too. We visit Chinese restaurants and cafes, which are proliferated in Mexico City’s Barrio Chino (Chinatown) but even more in the state of Baja California. They tend to have the red lamps and paper dragons and optional chopsticks (thankfully, because as to this day, I haven’t learned to use them…embarrassing, I know) and they have coffee, if you would rather drink it, instead of tea.

This recipe for Green Beans with Cacahautes and Chile de Arbol is one of its highlights. Thanks to Miller’s basics, I could brush up on my stir-frying technique, so the dish turns out just like my grandmother liked her stir fries: tender, crunchy, fresh and full of flavor. 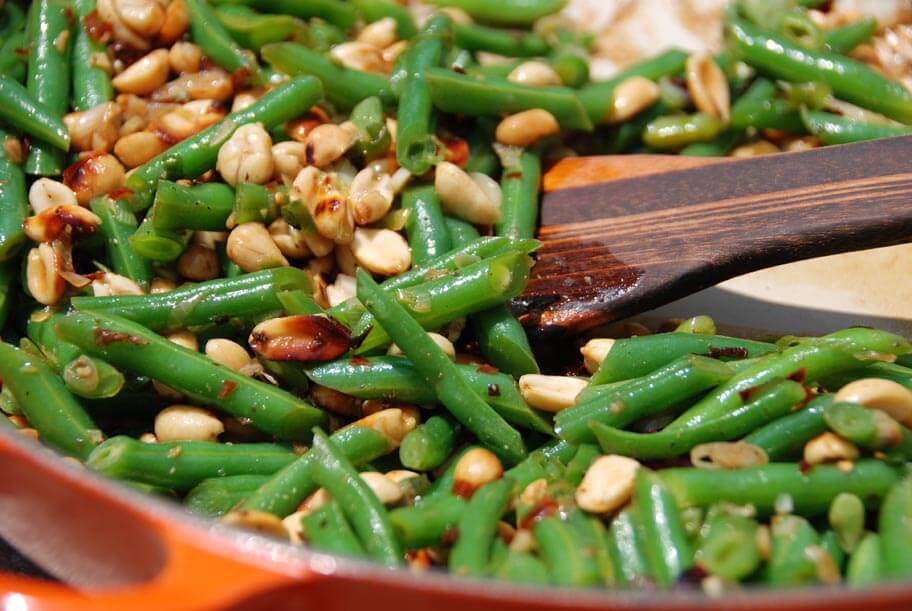 I added a double peanut layer, by using peanut oil, that becomes very nutty as the beans cook, as well as a healthy dose of garlic and chile de árbol. It’s become a staple at home.

And you know what? It turns out you don’t need a wok to make stir fries. You just need a thick pot that can withstand high heat and has a large surface: a la Mexican. I found out because, NO, I have not found that electric cord, and NO, I will not buy another wok. In my kitchen, it is only my grandmother’s wok that will remain king: If only in theory, until I find that electric cord…

Tangerine Chile Gran Paloma The Paloma is one of Mexico's favorite ways to drink tequila, and I put my own…