You can do fabulous things with pumpkins aside from spooky faces and pumpkin pie… Just ask any Mexican. We have a way with pumpkins.

Native to Mexico, pumpkins have been devoured there for centuries, in their entirety. The seeds are addicting as snacks, used as a hefty base for salsas, soups and sauces and more recently sprinkled on top of many dishes. The pumpkin meat is used for soups and stews, and along with the entire rind cooked in a piloncillo syrup, becoming a traditional favorite known as Tacha.

Yet there is something else you can make with those fall pumpkins: Mole!

An easy to make, silky textured and exquisite tasting mole sauce, that can bathe anything you can think of. From chicken to meat, fish, seafood and veggies; it all goes beautifully swaddled in it. I like it mostly with chicken or turkey, which is how I am most used to eating thick and rich Mole sauces….

So that you can try it too, here it goes.

As simple as it is to make, it uses two ancient and crucial techniques of Mexican cooking that enhance the flavors of the ingredients and bring a ton of personality to a dish: charring and toasting. 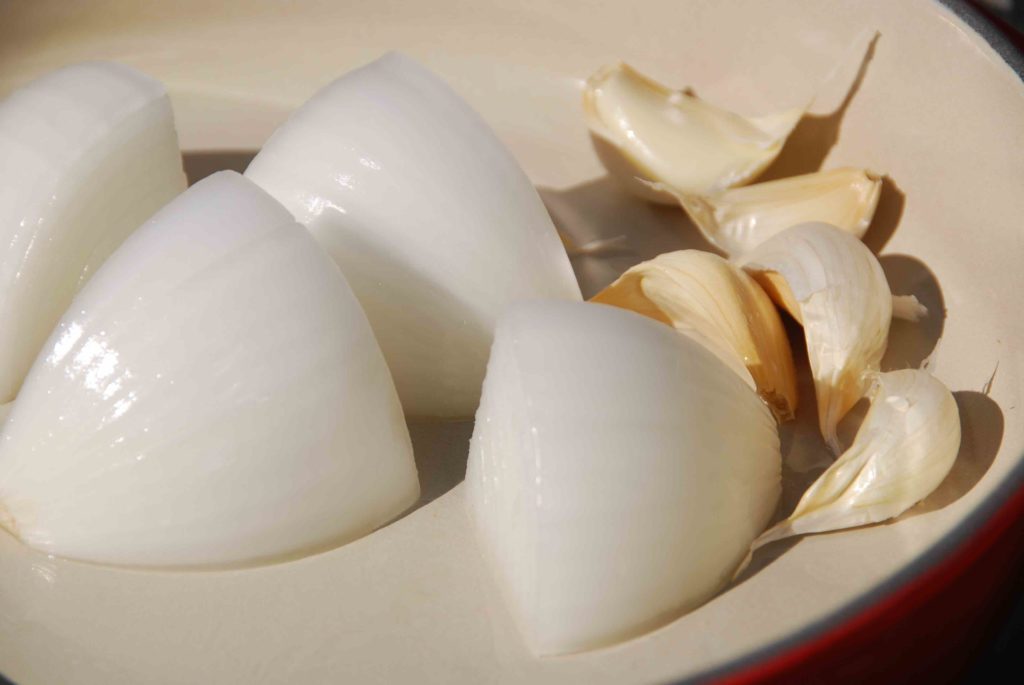 First the onion and garlic take a quick turn under the broiler to be charred. Their sharp, crisp and pungent flavors become transformed… 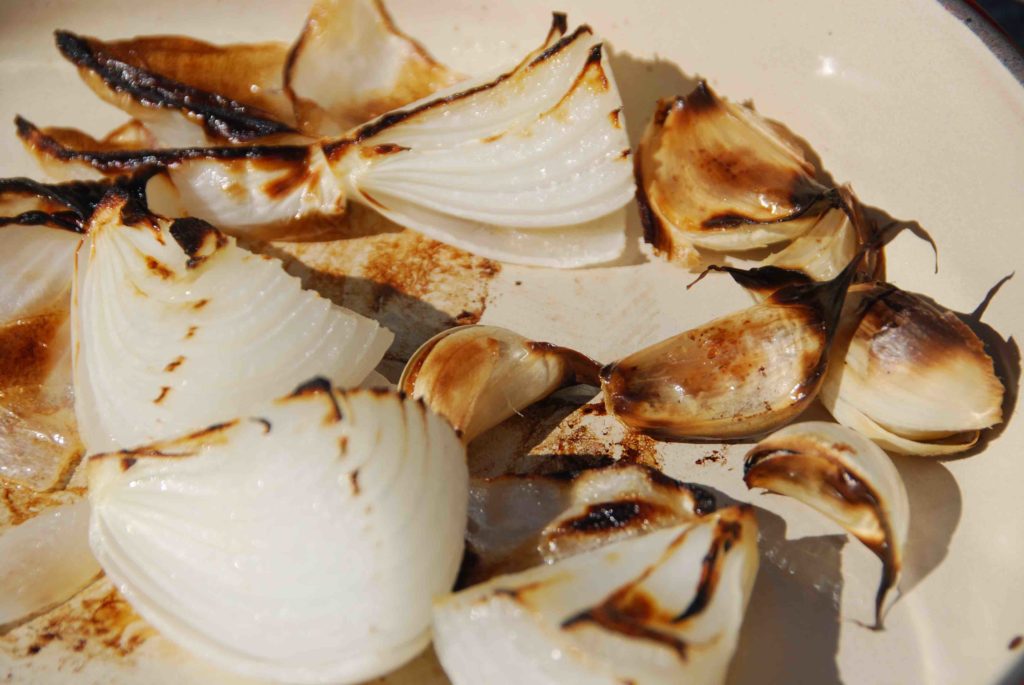 …as if their alter ego came out to show depth and sweetness. While at the same time becoming a bit rustic.

Then the ancho chiles, almonds, cinnamon, allspice and whole cloves take a turn either in a skillet or comal, to lightly toast. 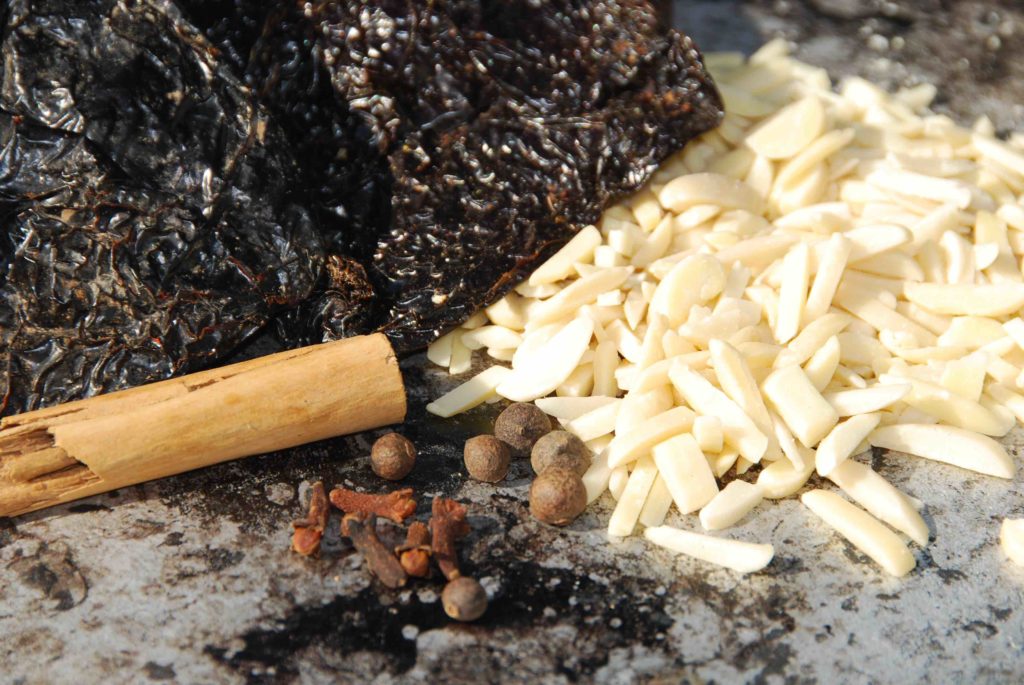 Toasting them intensifies and deepens their flavor, it releases new aromas and adds a kind of warmth to the dish. 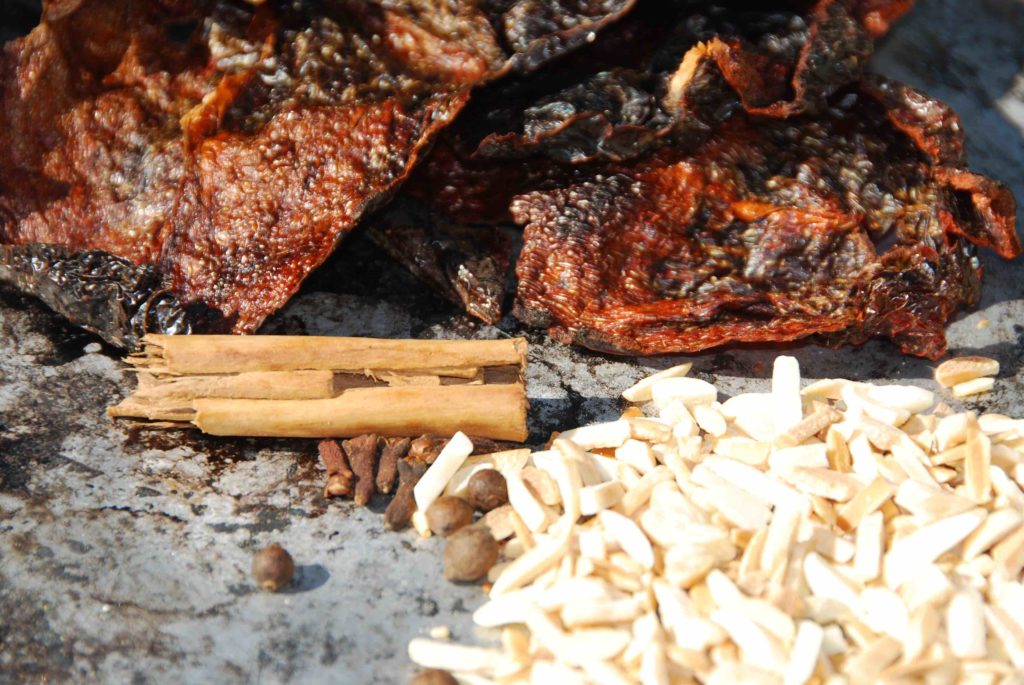 As the chiles have been dried for a long time, aside from giving them a light toast, you need to rehydrate them and plump them back to life. And it takes just 10 minutes of soaking them in a hot bath. 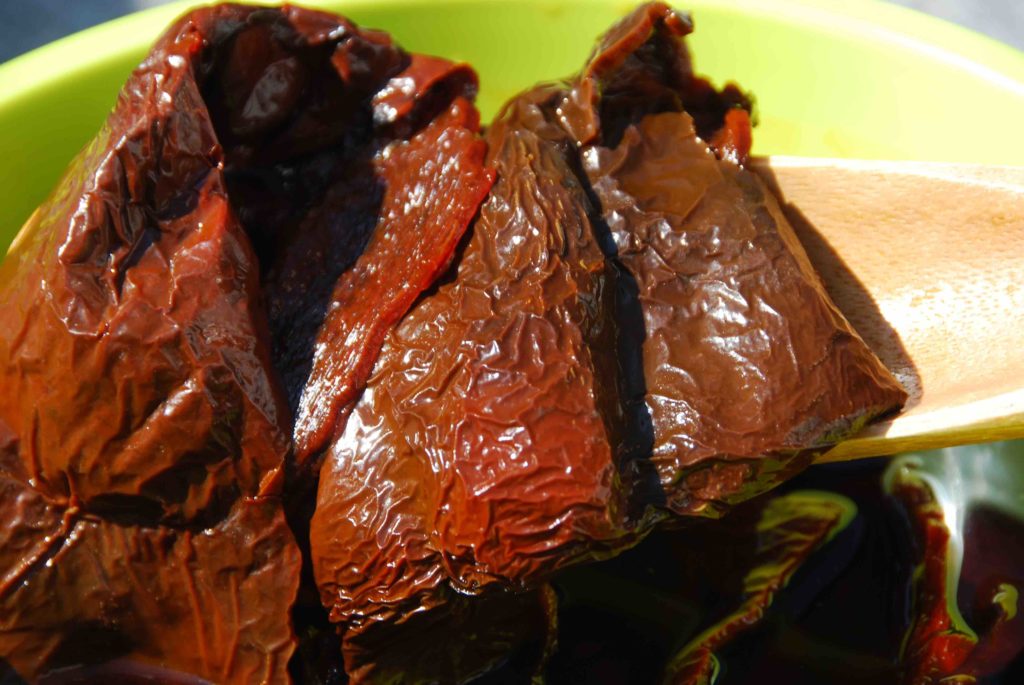 Then you also use that water from the chile bath, as it has some of the intense flavors and colors of the chiles, as well as the chiles to make the Mole Sauce.

Then everything in the blender goes! 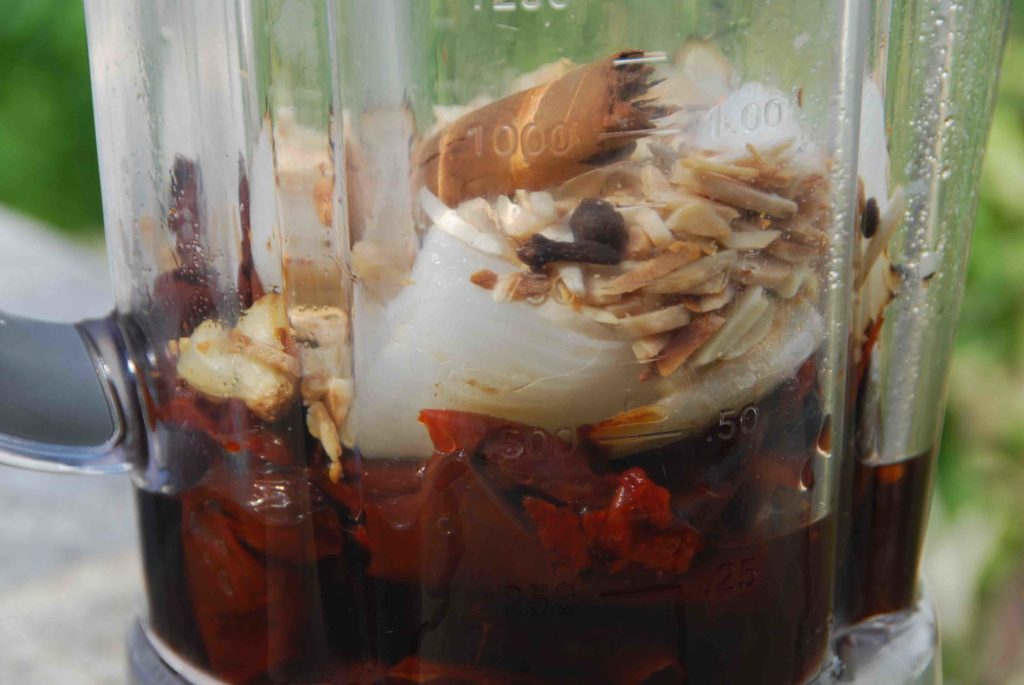 If you used True or Ceylon cinnamon, puree it along with the rest of the ingredients. As it is light and thin, it crumbles and purees easily. It is gentle and kind to the blades of the blender. If you only found the hard Cassia kind, use it to simmer in the mole sauce further on. 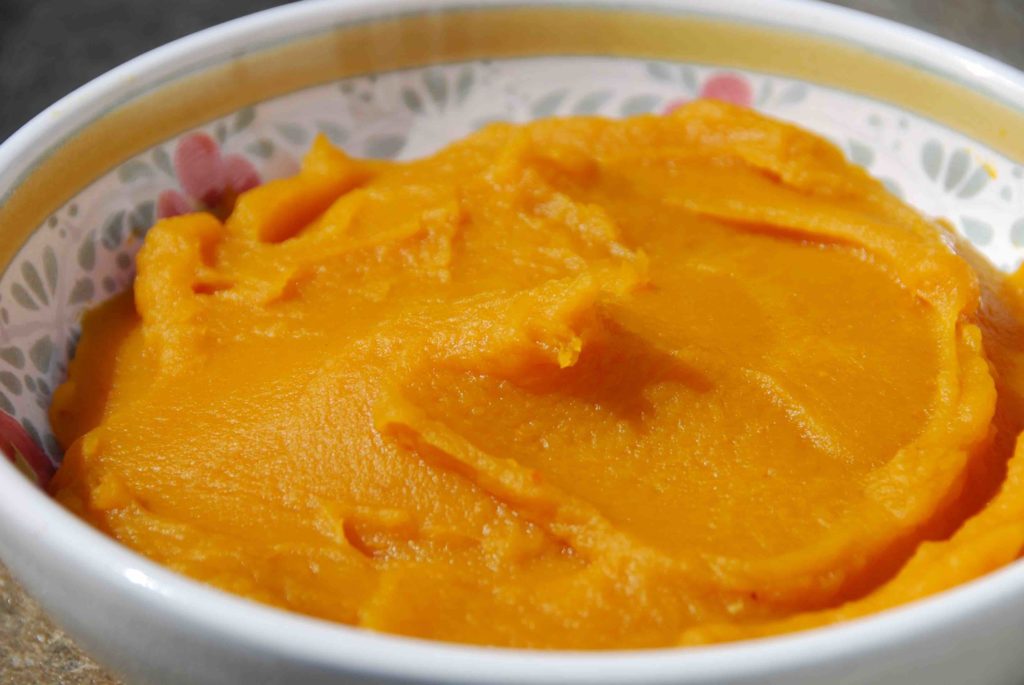 Or make your own pumpkin puree with those extra pumpkins that are sitting on your front porch… Making the puree is pretty simple: Quarter the pumpkin, remove the seeds and fibers, roast in the oven at 400 ºF until soft and process the pumpkin meat in a blender of food processor until smooth.

After you simmer the pumpkin puree along with the ancho chile puree (that has the charred and toasted ingredients), it will look like this. Incredibly rich, just like its flavor. 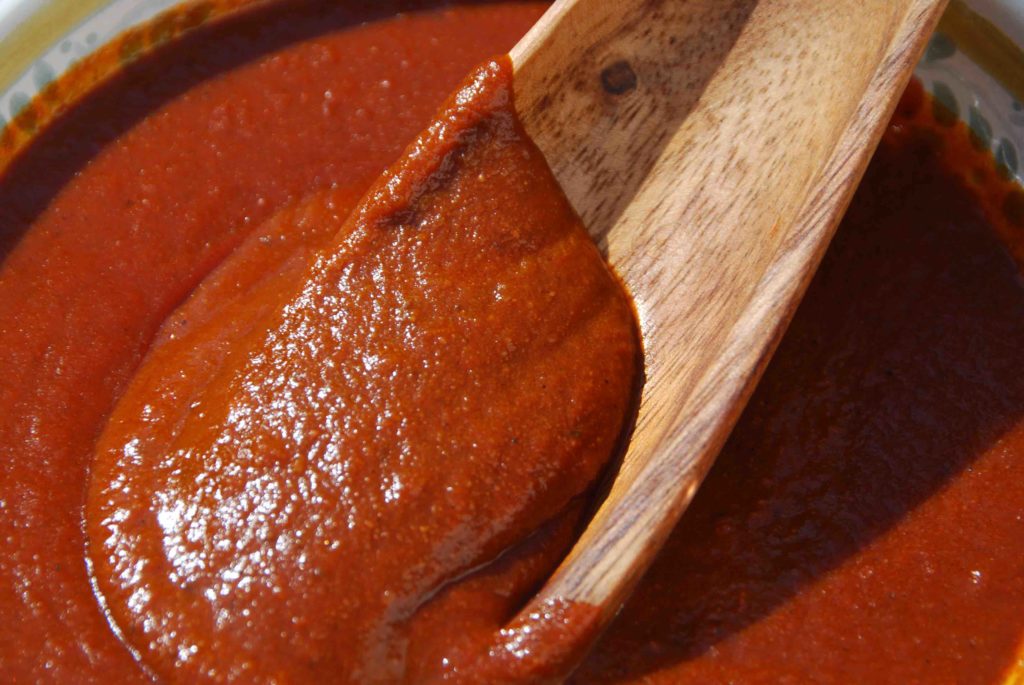 You can make the Pumpkin and Ancho Chile Mole ahead of time, and just heat it when you are ready to serve it.

Topping it with toasted pumpkin seeds makes the dish all the more fabulous.  You can taste it already, right? 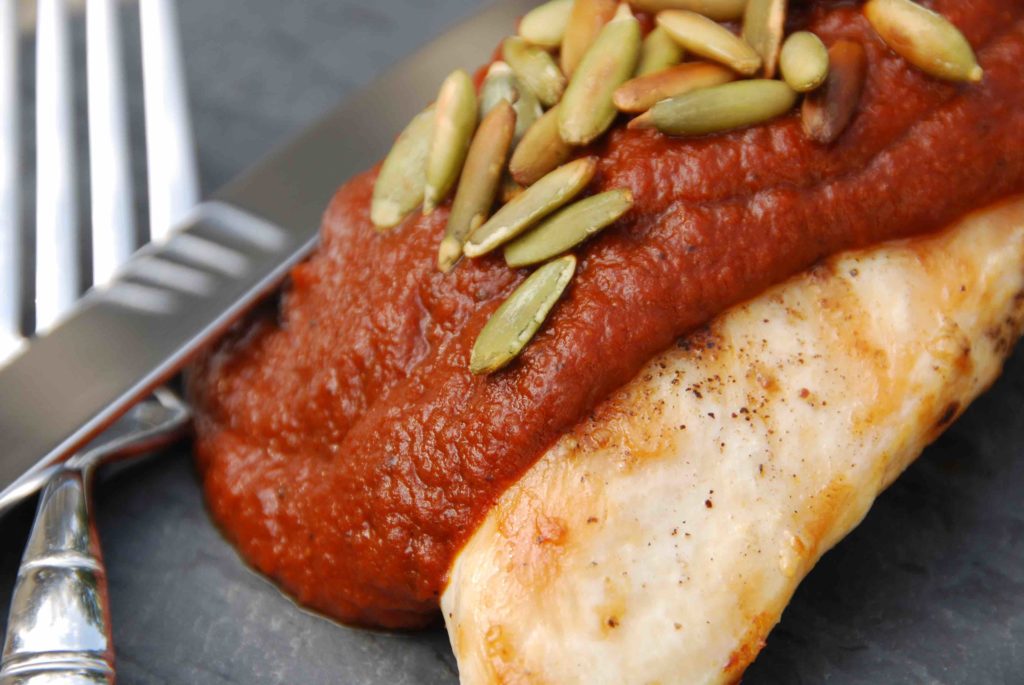 Tamales are practically required on so many December holidays. Take Posadas. And Christmas. Not to mention New Year's. Wait, of…

Mole Poblano: Yes You Can!

The showcase of last week's class was one of Mexico's most famous and delicious moles, the Poblano, which originated in…