Pastel de Tres Leches or Three Milk’s Cake, is one of the most, if not the most popular and sold cake throughout Mexico. It is also amongst the most requested recipes I have been asked for after Pickled Jalapeños and Piggie cookies. So dear readers, I am sorry it has taken this long but here it goes! I promise to get to the other requests, which I love getting on your emails, as soon as possible.

Tres Leches is a sweet, practically wet, homey cake. Its base is a vanilla sponge cake, completely soaked in a sauce traditionally made with three kinds of milk: sweetened condensed milk, evaporated milk and regular milk. Some versions substitute regular milk with heavy cream. The cake will sometimes have a topping like fresh whipped cream, which I seriously consider of utmost necessity. Sometimes the topping turns out to be meringue or even chocolate ganache.

Growing up in Mexico City, there was a bakery called La Gran Via, which sold such delicious Tres Leches that even though it was far from home, we used to drive many Sundays to get one. These days La Gran Via has become a large chain store of bakeries… it has been years since I have eaten one of  their cakes. This recipe, is as close as I get to my nostalgic memories. Separately beat the egg yolks until thick, creamy and very pale in color and add some vanilla.

I really feel the need to take a photo of the vanilla and show it to you. It’s Mexican vanilla from Papantla, the place where vanilla originated. Vanilla grown and harvested in Papantla, really blows me away. And just look how pretty the bottle is… Then pour the egg yolks (look at how thick and pale the egg yolks are after beating them for 4 to 5 minutes, that’s what you want) with that hint of vanilla, onto the egg white mixture. Pour it all on top… Gently, with a spatula, in evolving motions, combine the yellow with the white, being careful not to lose much of the volume and fluffiness already achieved. Once well combined, add the flour and incorporate it in evolving motions. Pour that batter onto the prepared pan, buttered and lined with parchment paper.

It is a simple cake batter: just egg whites, sugar, egg yolks, vanilla and flour. But it turns out fluffy, homey and spongy because of the way these ingredients are used. Into the oven for about 25 minutes, until the cake has a nice tanned crust, it is spongy to the touch and a toothpick comes out clean. After you get the cake out of the oven, invert it onto a plate and poke all over with a fork, or two forks. You want to help the cake find ways to absorb the sauce you are about to make. There goes the condensed milk and the evaporated milk into the regular milk, and a bit more vanilla. Some modern versions of the cake add other kinds of flavors into the sauce, like chocolate, cajeta (Mexican goat’s milk version of dulce de leche) or Rompope (Mexican eggnog). If you like a hint of alcohol in your desserts, go ahead and pour in some Rum or Kahlua.

Pour all the sauce on top… Though not all versions of the cake have whipped cream on top I think it is of the most absolute necessity. Life or death. NEED it. Spoon it. Spread it. The cake tastes much better when it has had a chance to soak in all of that sauce and when it is cold. So it is a good idea to cover it and refrigerate it for at least an hour.

It is simple to eat, simple to see, simple to make. It is a simply unfussy and tasty dessert that is somewhat neutral, so it can take many variations. Of course you can add some fruit on top or in between, fresh strawberries work really nice here, its your choice.

The fluffy yet completely wet cake holds its shape as it gives in to the flavor of the sauce. The whipped cream, as you can see, just needs, needs, needs to go on top. It makes such a nice contrast with the wetness and sweetness of the cake. After you try it, let me know what you think. Whipped cream on top? 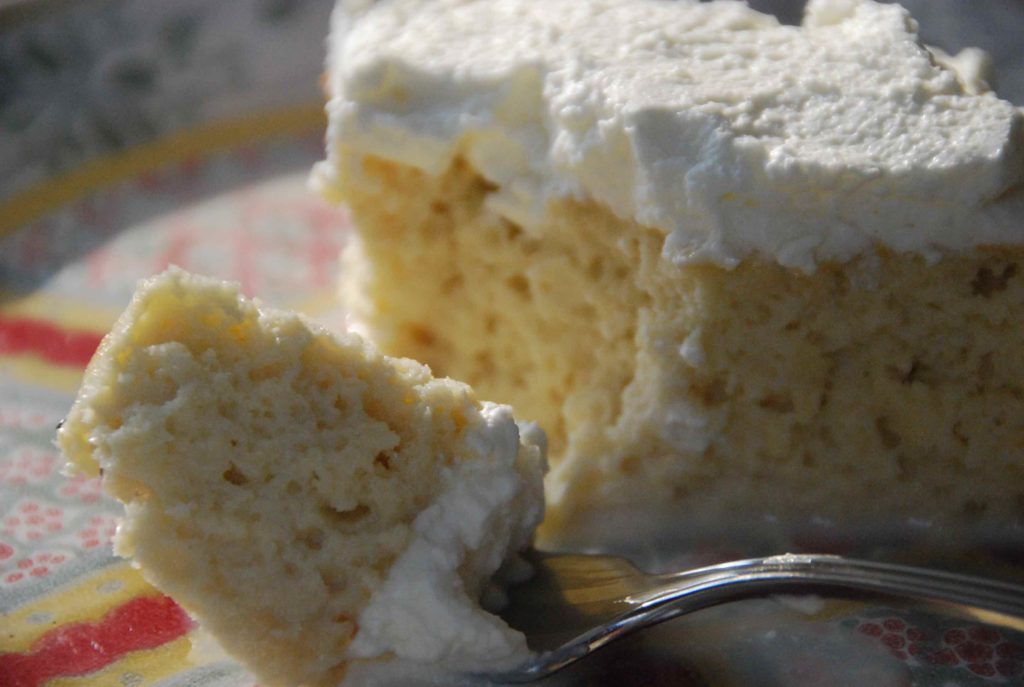