The last time I was at the Mexico City Chapultepec Fair was 20 years ago, with my high school friends. Going back last weekend with my own growing monsters, confirmed that it is not an ordinary Fair experience, ever, regardless of one’s age.

Yes, you find the balloons, with a mix of Mexican and American characters, right at the main entrance. 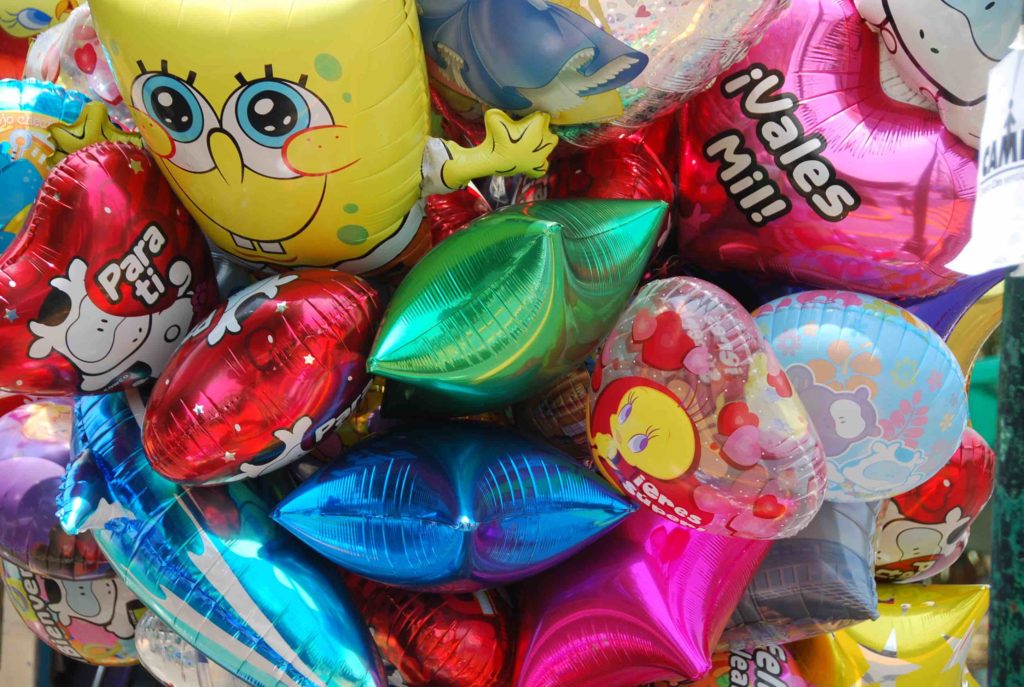 You will always find Mrs. Bird Lady, somber as can be, with her clairvoyant birds. As soon as she looks you up and down, she knows which of her birds can tell your future more accurately. Maybe… 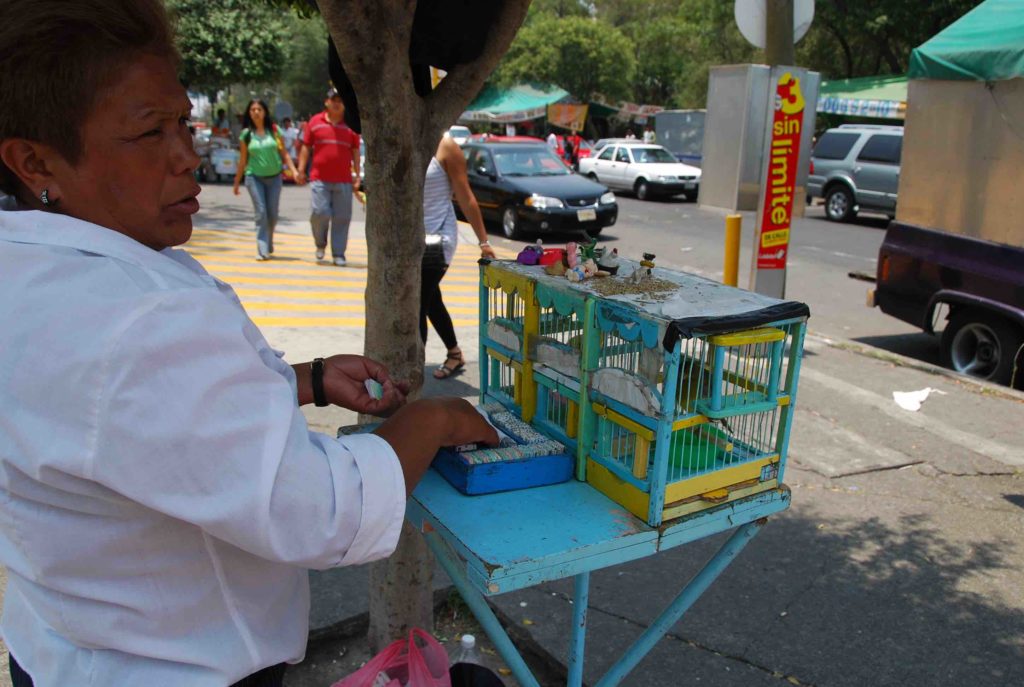 For 20 pesos, the cute little bird steps out of the wooden cage, fully concentrated, knowing you think it holds the surprises of your future in its beak. 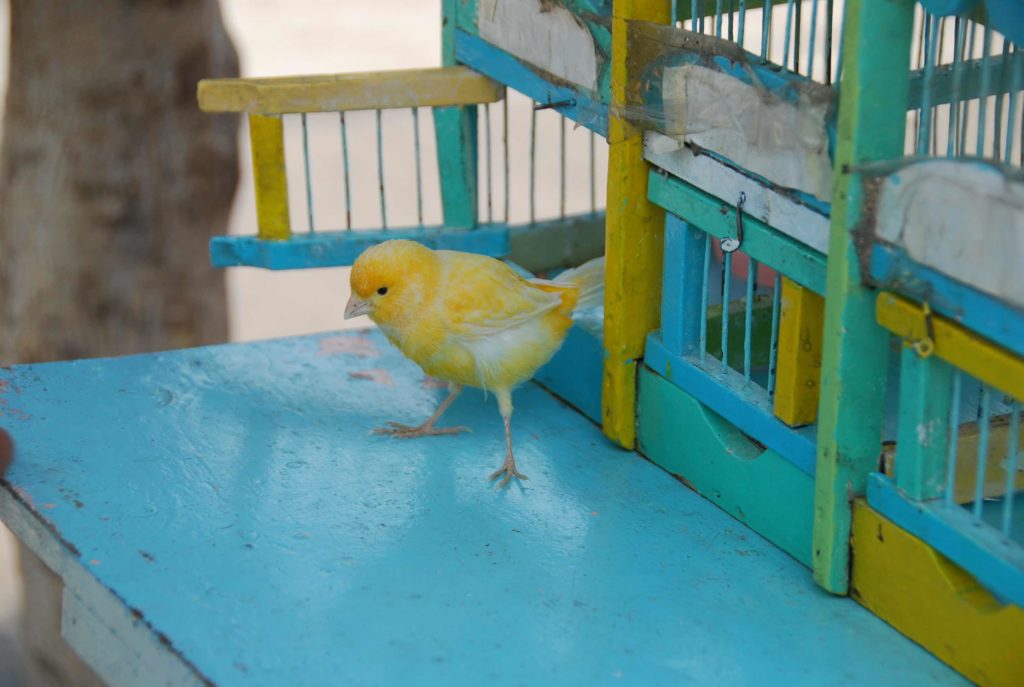 It elegantly chooses the three cards that will reveal it to you. 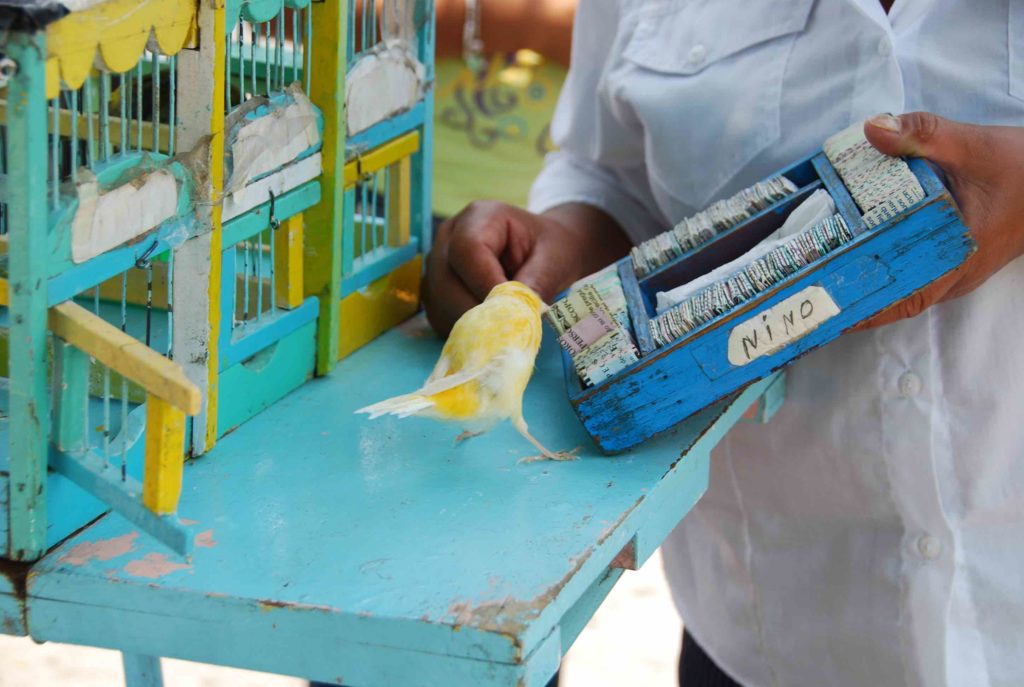 After being completely clueless with the shocking differences from what the three cards said, you go in for the rides.

And wow man, does that Fair have rides. From beastly roller coasters… 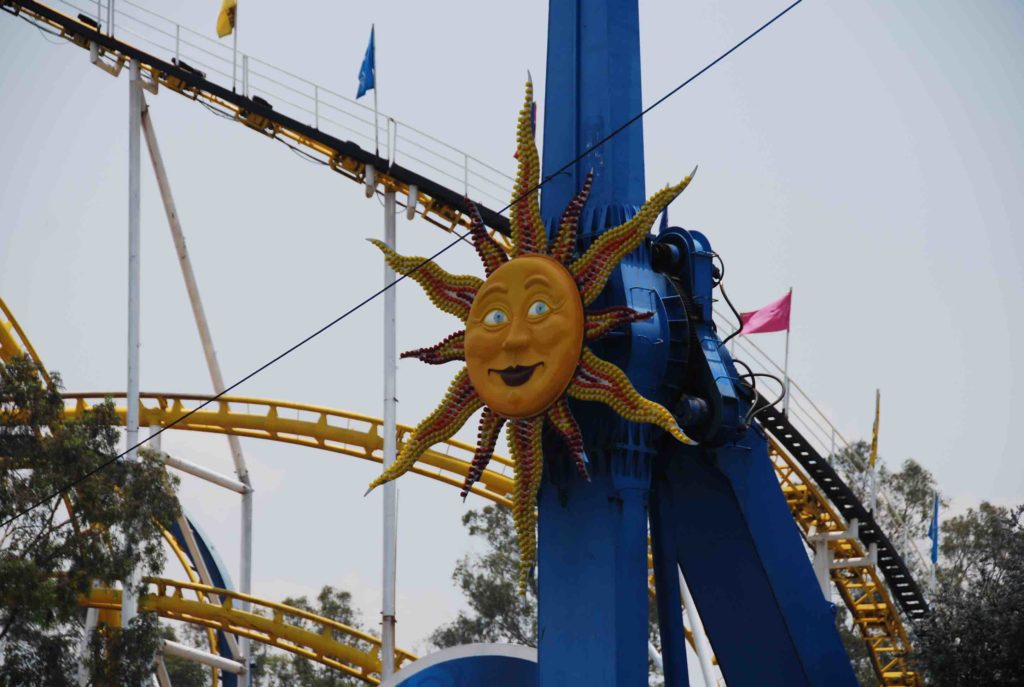 To the dizzying Nao de China. History tells us that the Naos were really Galleons from the Philippines, that traveled the Manila-Acapulco trade route since the XVI century, bringing so many ingredients into Mexico’s kitchens. But who knows why the name has been popularly changed, for centuries now, to the Nao from China. I guess it sounds more exotic.

Oh well, the monsters couldn’t care less about the accurate food history, all they wanted to do was ride that boat again and again. 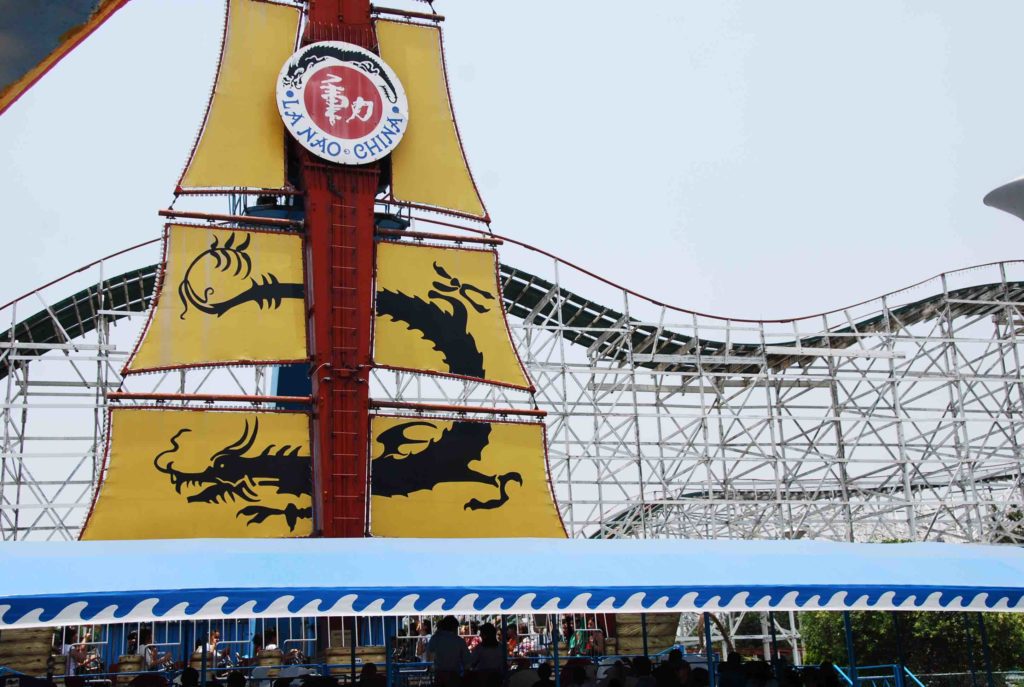 As well as that crazy ride that goes up and down, which I refused to ride. 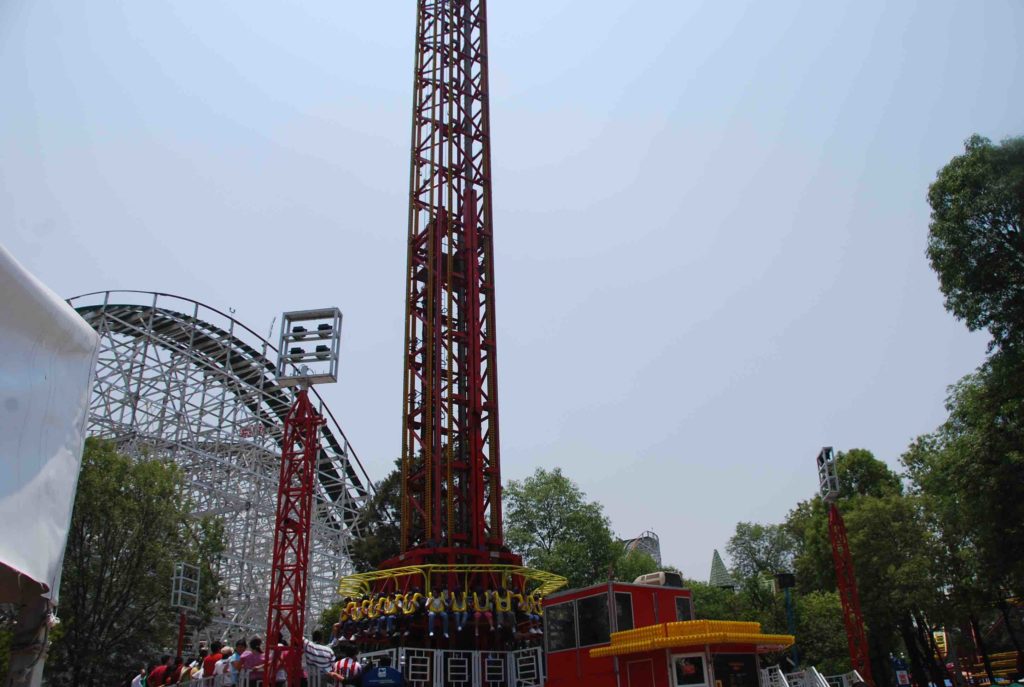 There’s my oldest monster, happy with two of his cousins, after dozens of  rides. 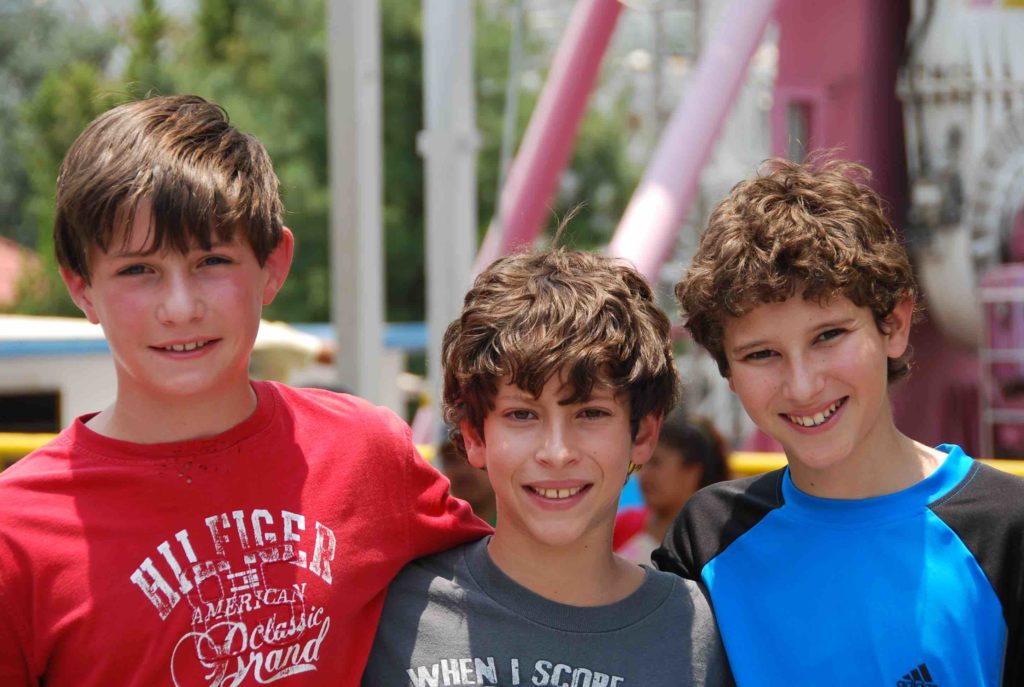 And there is absolutely no Mexican Fair without a Mexican clown. I took a FLIP video, so you can get into the mood.

I had to stop there. If you know Spanish, you heard the clown inviting kids to come up the stage. Some of mine wanted to try. Nope. They didn’t get a turn.

But what is most amazing about the Fair, is the amount and diversity of finger licking foods to be found.

Say, even before you walk in, there is Mr. Cotton Candy Man. 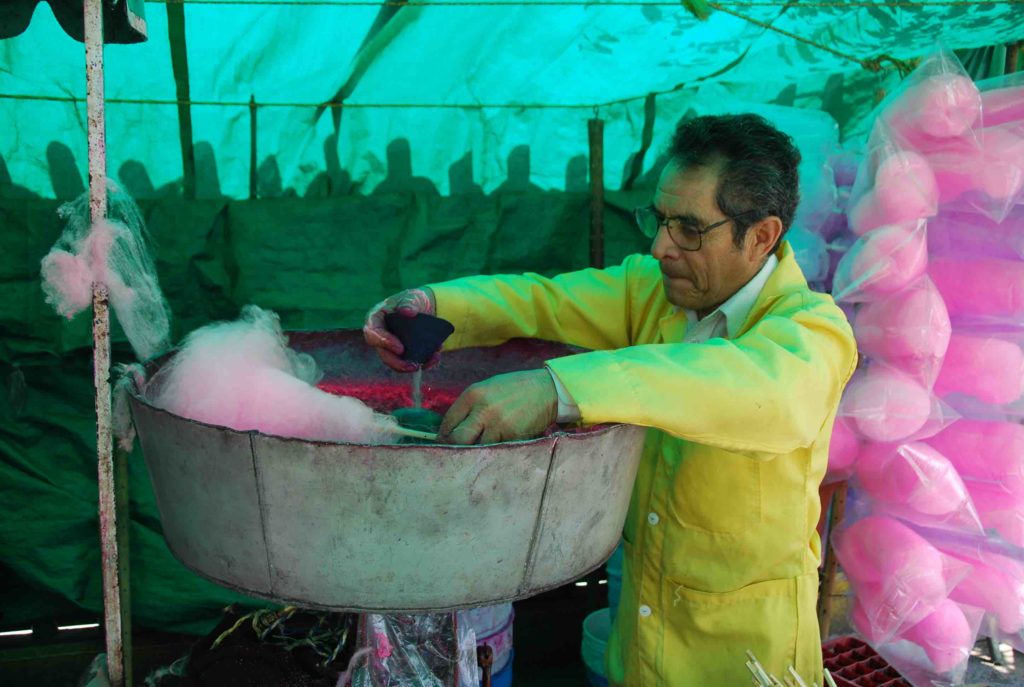 That was some light, fluffy, spongy and delicious cotton candy, we ate first, before anything else. 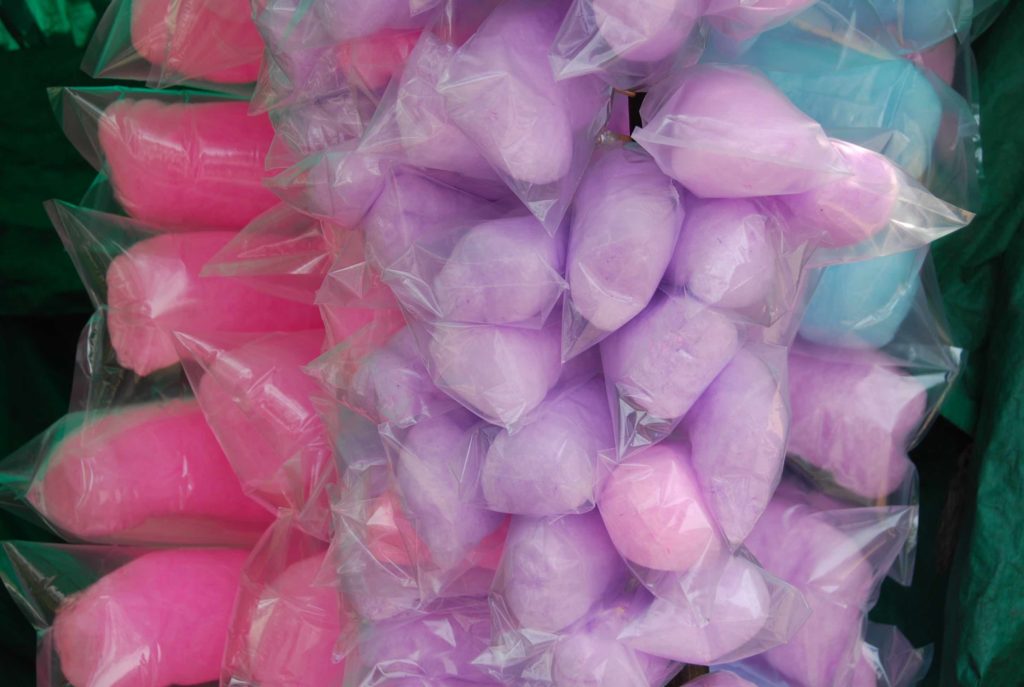 There are countless stands selling Mexican style hamburgers and hot dogs, which do drive me crazy. In such a good way. 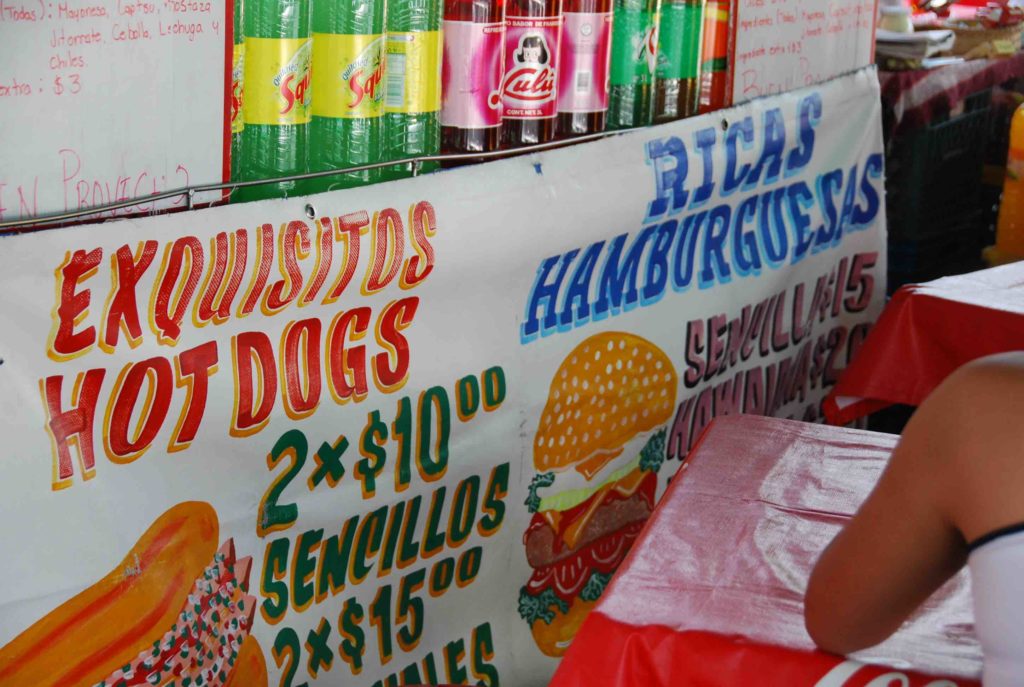 Garnished with raw or cooked onion, tomatoes and Jalapeños. Topped with ketchup and mustard until you say stop. As well as melted – until crisp – Cheddar cheese and crispy bacon, if you like. 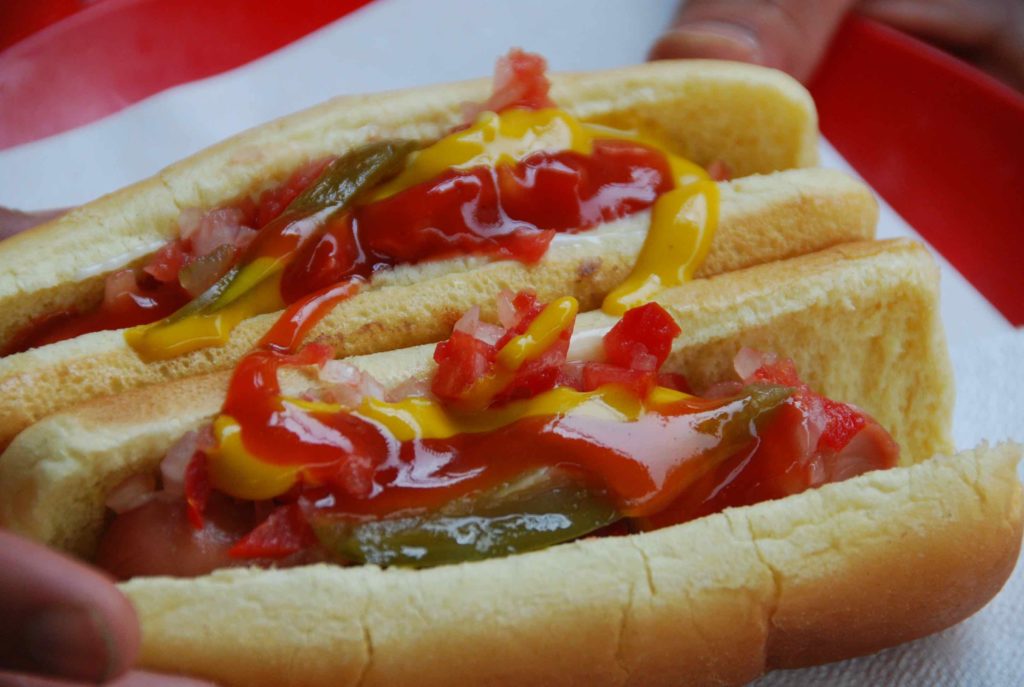 There are exotically flavored popsicles: Jamaica flowers, Horchata, Tamarind, Mango with Chile, Pecans, Strawberries and Cream, Zapote, Mamey, Coconut, Tangerine, amongst some… And they can all be drizzled with a healthy dose of Chamoy on top. 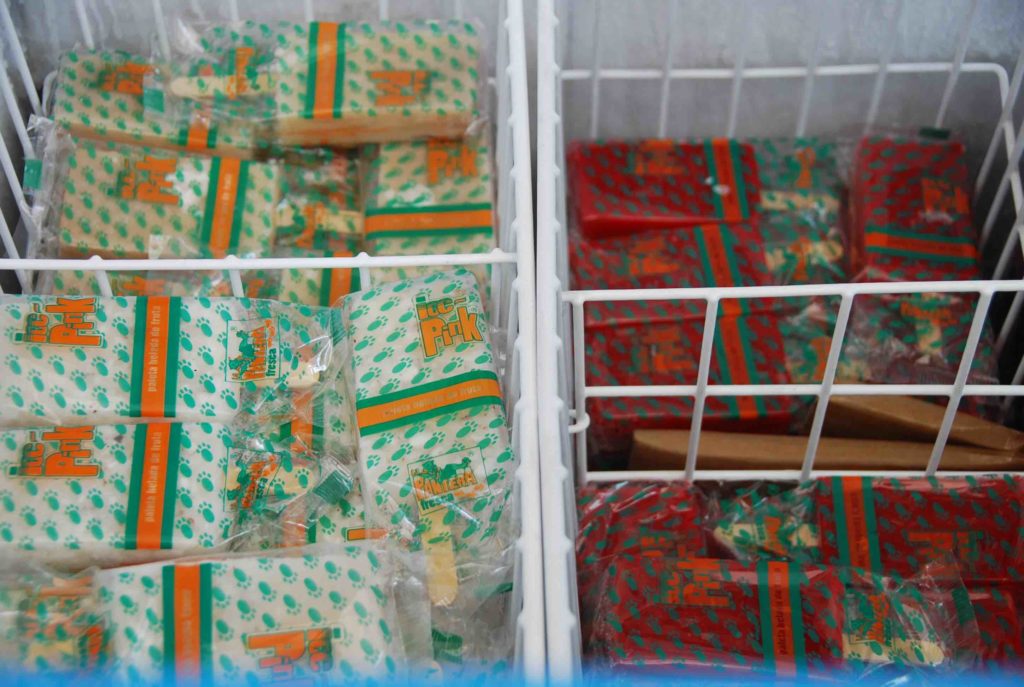 There is a grand place to find all sorts of candies… 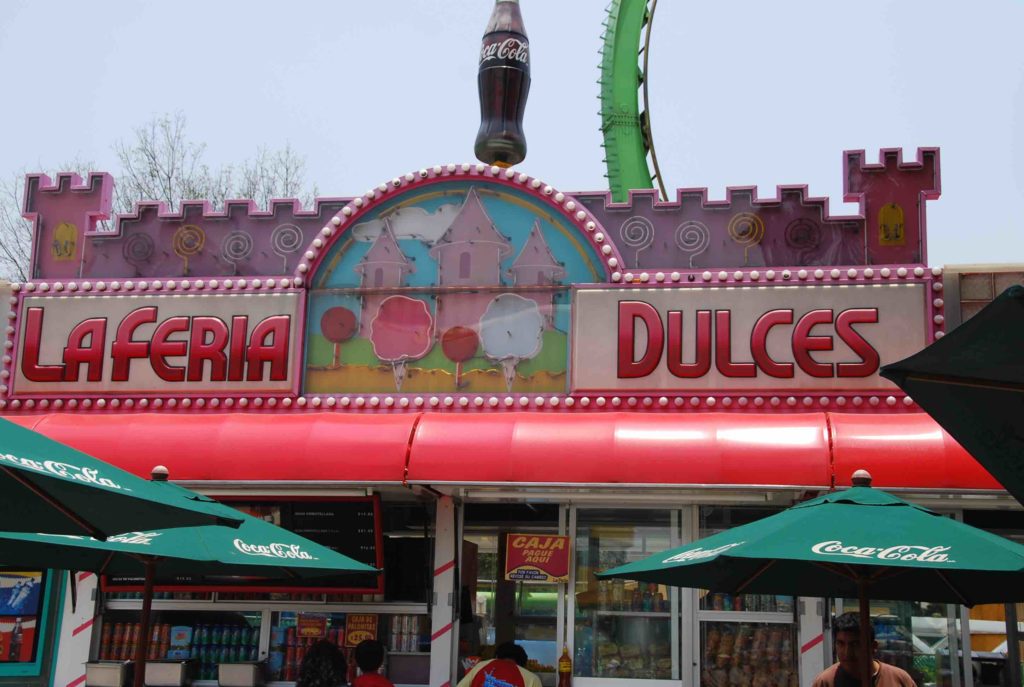 …that tend to be spiced up, with different levels of heat. Not for the faint-hearted. 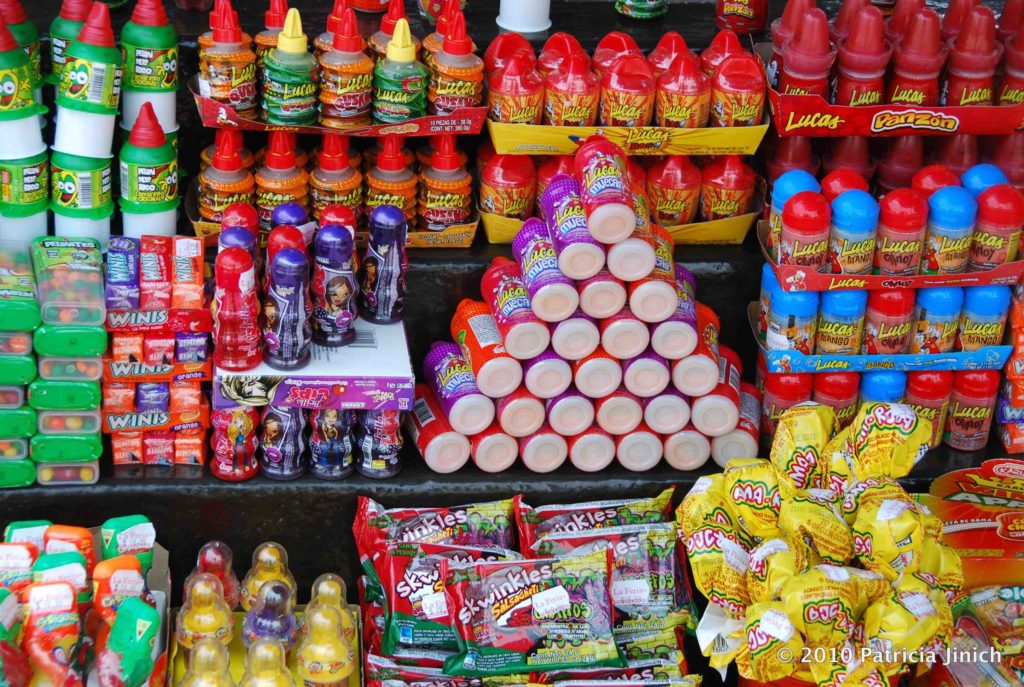 As well as different kinds of crunchy snacks like potato chips and chicharrones, which MUST be squirted with Chile sauce, freshly squeezed lime juice and salt. Really, they MUST. 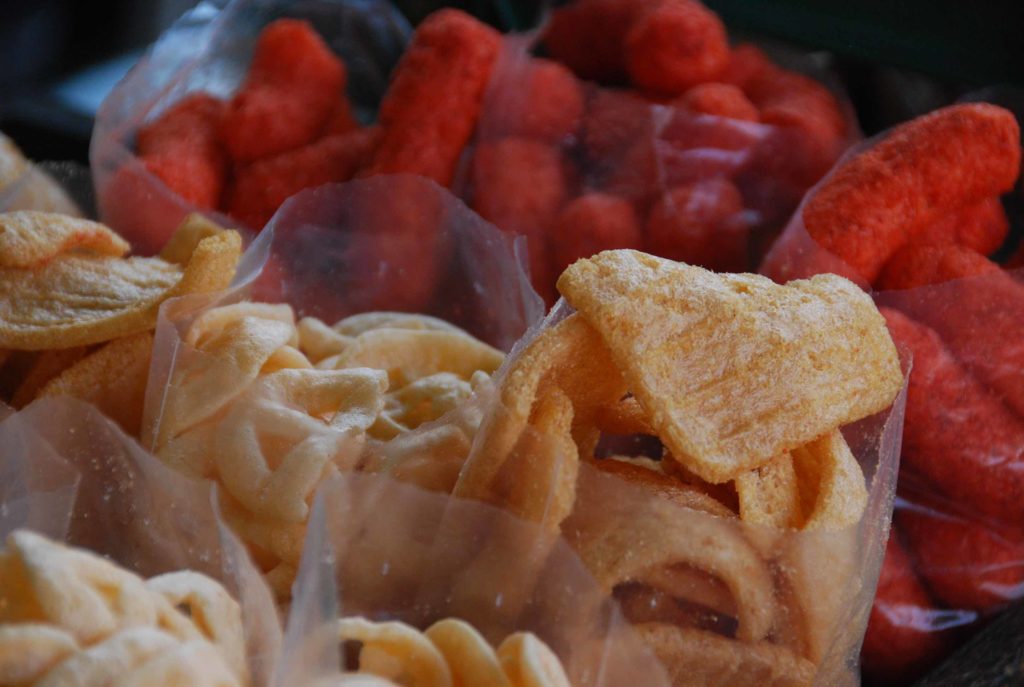 Popcorn freshly popped, MUST also be squirted with a chile sauce. 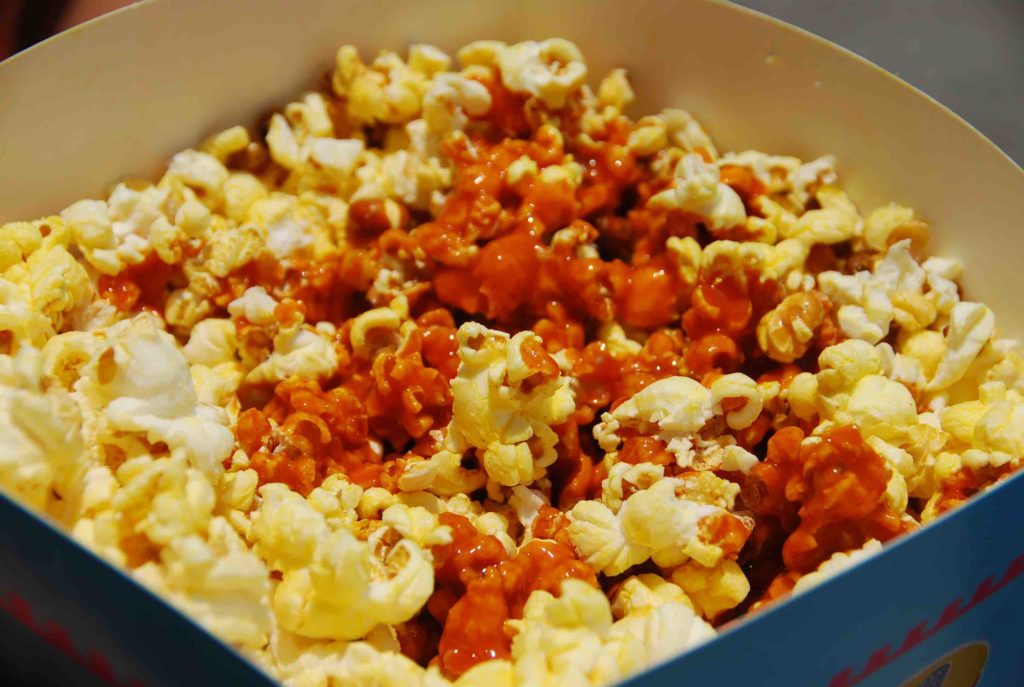 There are taco and torta stands. 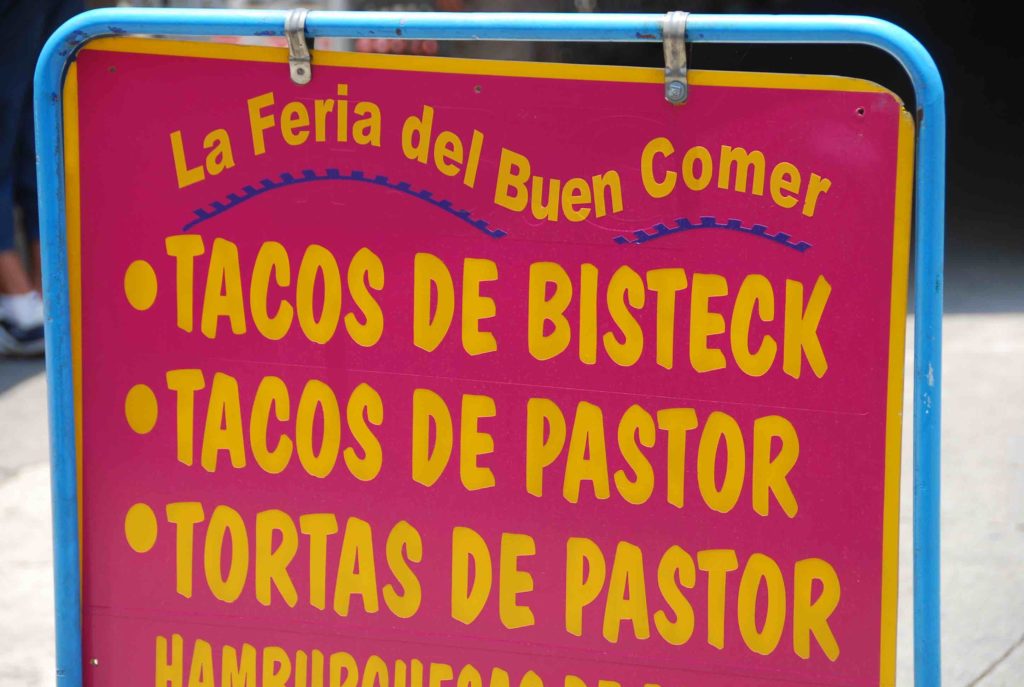 The best torta, this time, was the Torta de Pastor.

Mr. Torta de Pastor was kindly showing me how he prepared the Torta that was about to be all mine. He takes a telera -Mexican style French baguette – and heats it on the grill. He places juicy thin layers of that carne in adobo he is slicing below, crunchy onion and savory cilantro. 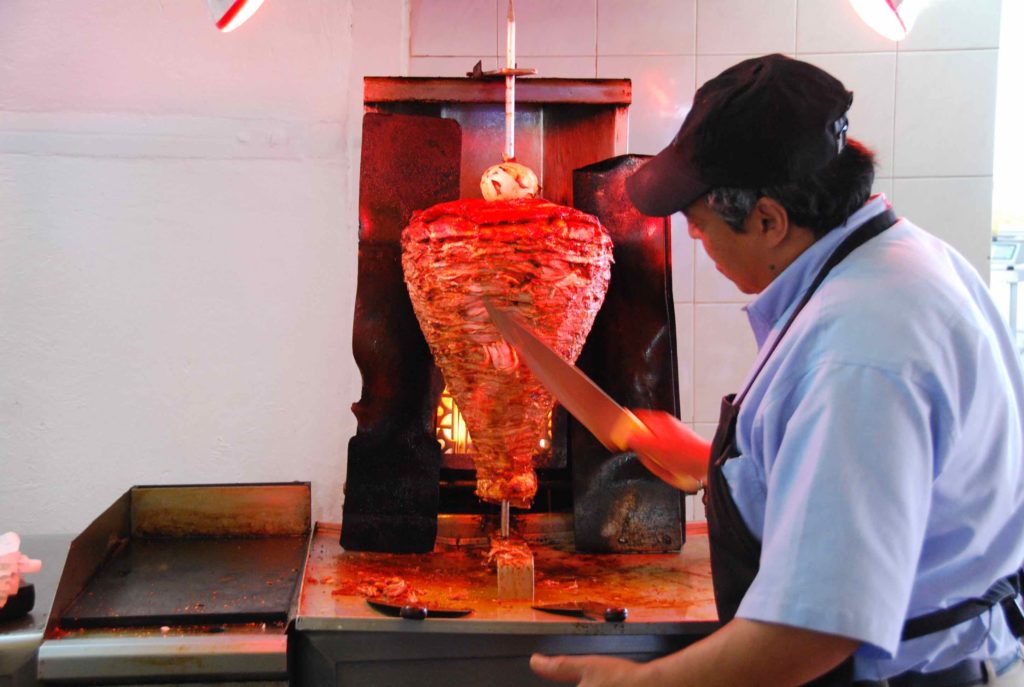 Then you can add the salsa of your choice, from many that he lets you choose from.

You know you want to take a bite into it. I should have taken a FLIP video of that, but I was too eager to sink my teeth into it. Sorry. 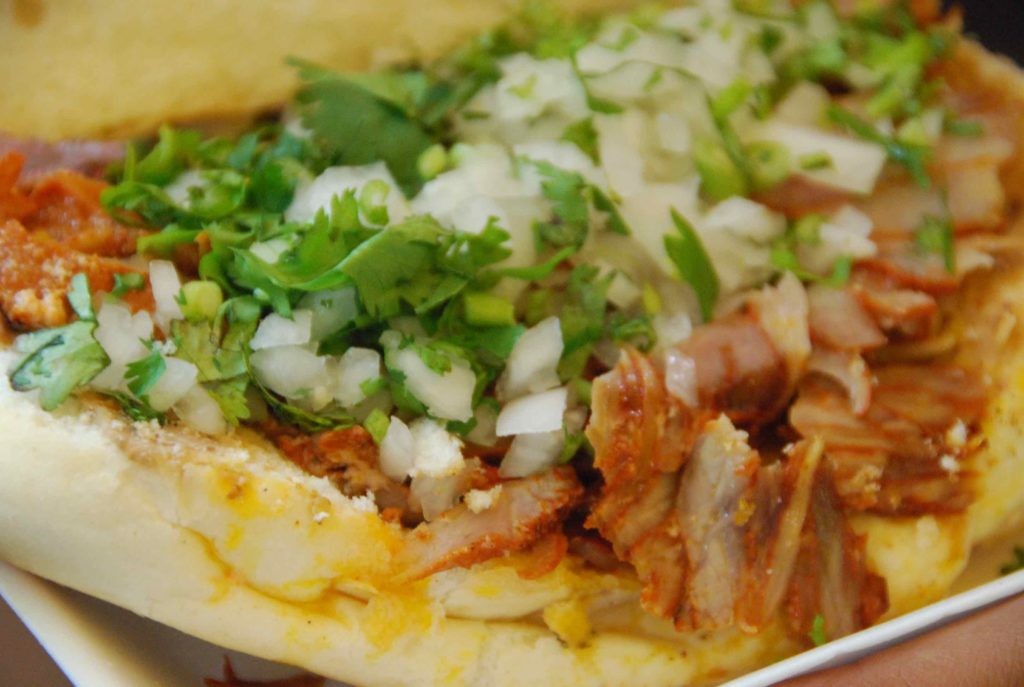 There were also Tlayudas. 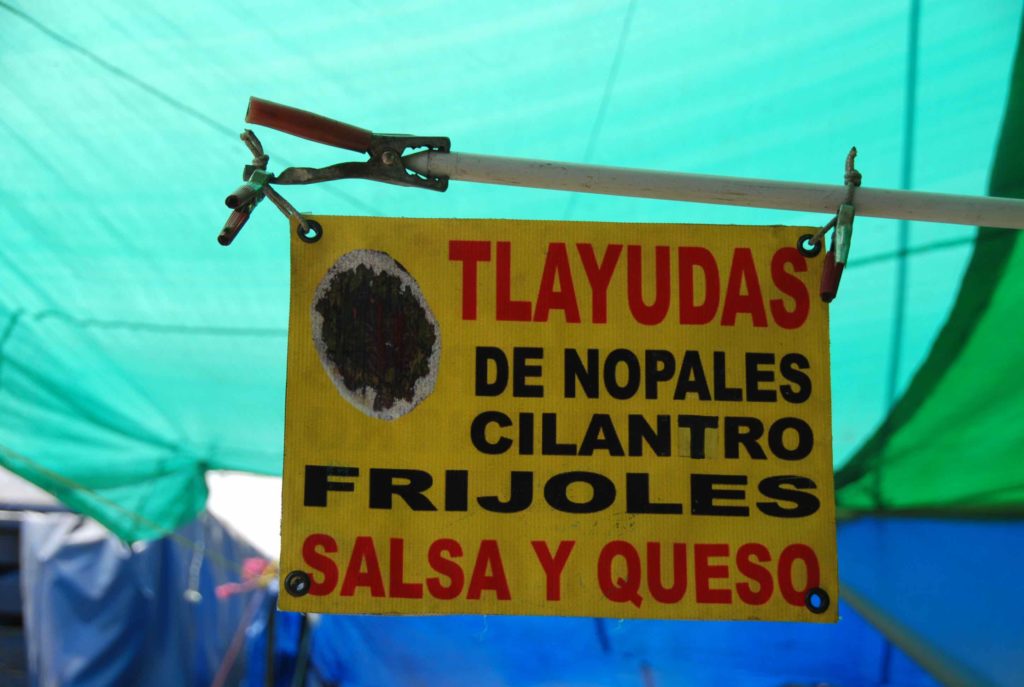 Tlayudas are very large, thin, toasted and crisp corn tortillas. Here they were covered with refried beans, seasoned cactus paddles, shredded aged cheese, onion, cilantro and topped with both, a red and a green sauce. 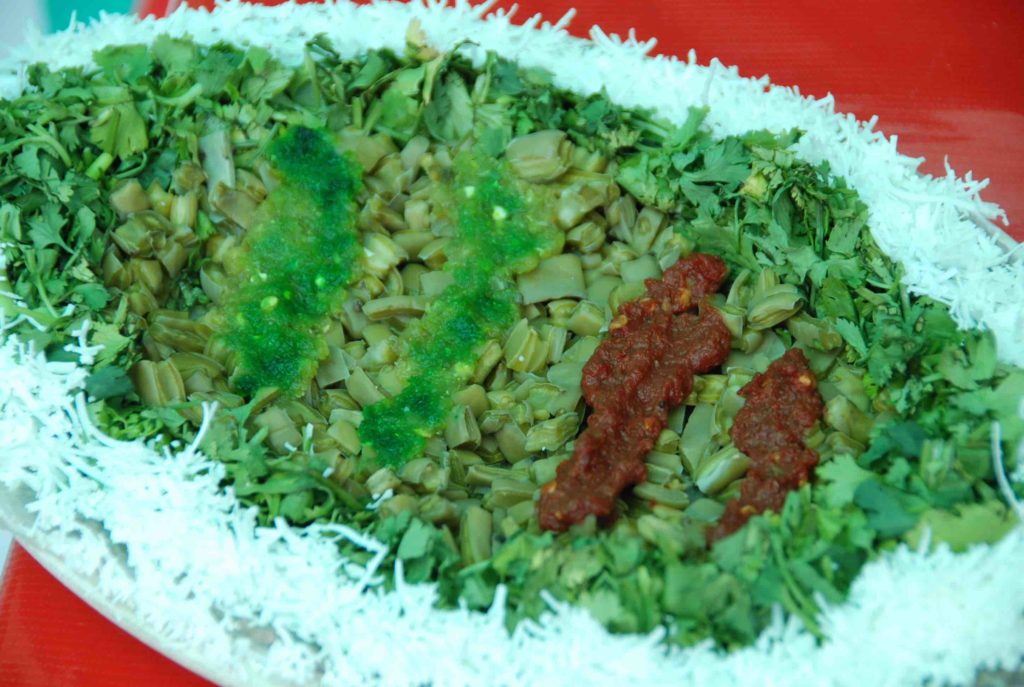 You will also find Nachos. Always. But that is Always, a no thank you from me. Not Here, not There, no Nachos for me Anywhere. 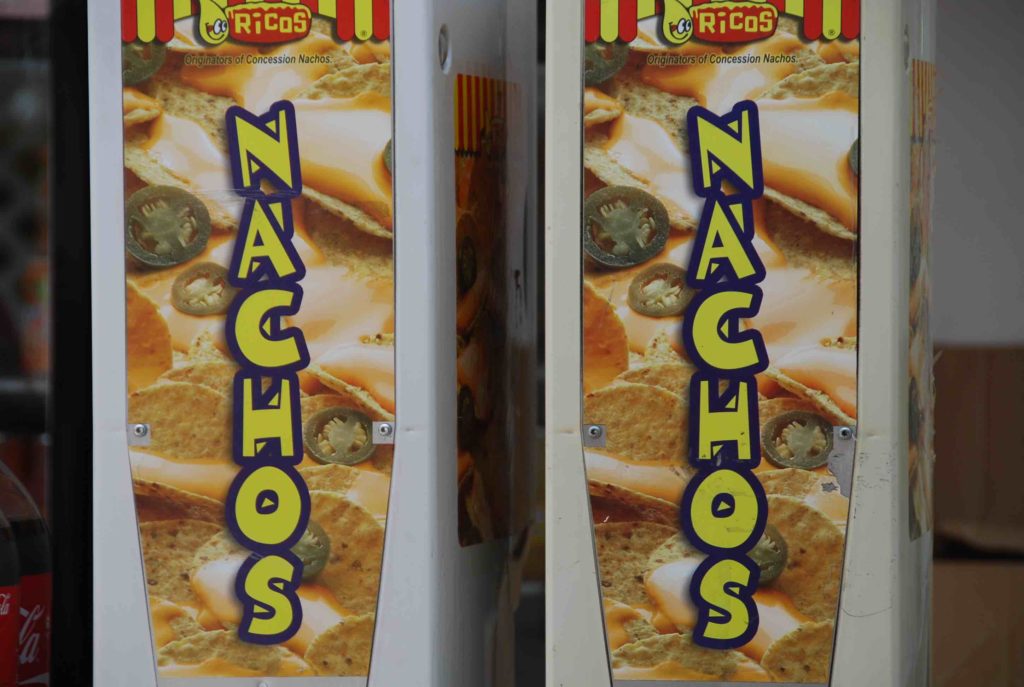 But the best, by far, were the quesadillas. Freshly made. 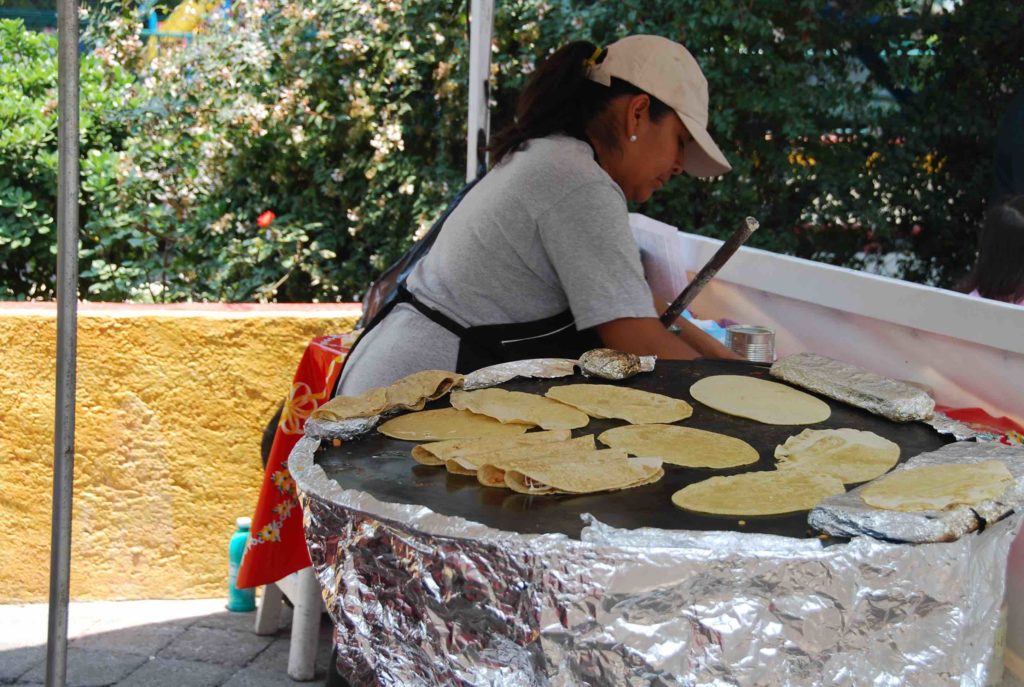 There are countless fillings for you to choose from. Right there, on the spot: seasoned cactus paddles, huitlacoche or mushrooms, chicken Tinga, shredded beef, potato and chorizo… 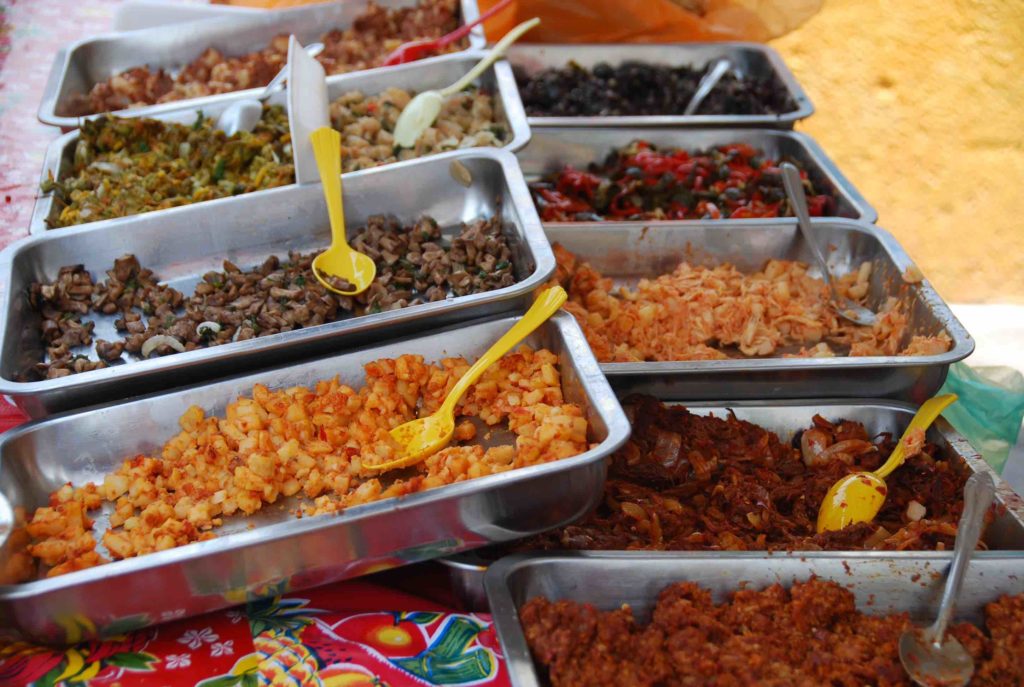 But my favorites are quesadillas with Squash Blossoms, Poblano Chile and Oaxaca cheese.

I like them so, I featured them in last year’s session at the Mexican Cultural Institute focused on Mexican Street Foods.

There are many ways that you can make them. You can make the corn dough from scratch, which is simple these days. Flatten in a tortilla press, add the filling and fry. As below. 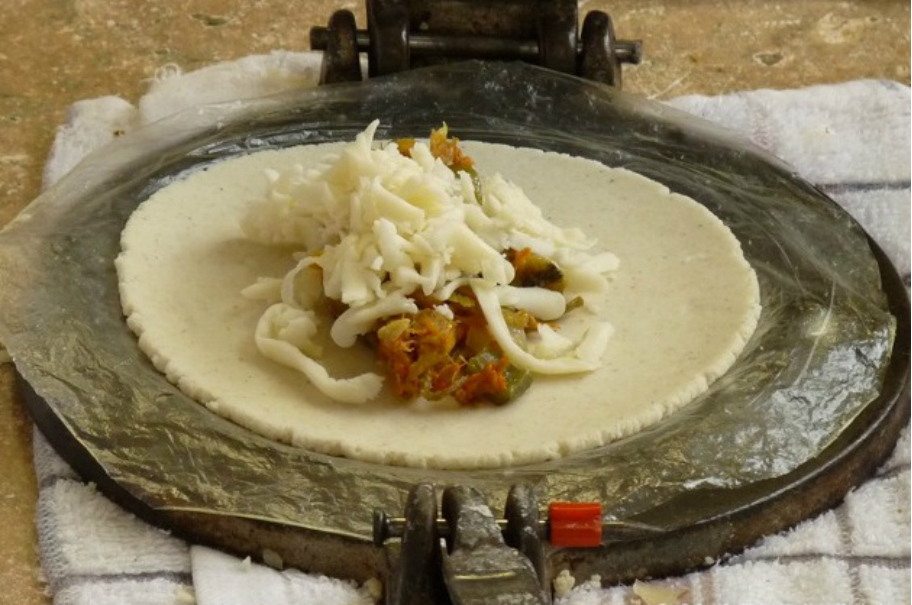 Or you can use pre-made corn tortillas, add the filling, heat on a comal or griddle until the cheese melts, and if you want until it crisps a little too. 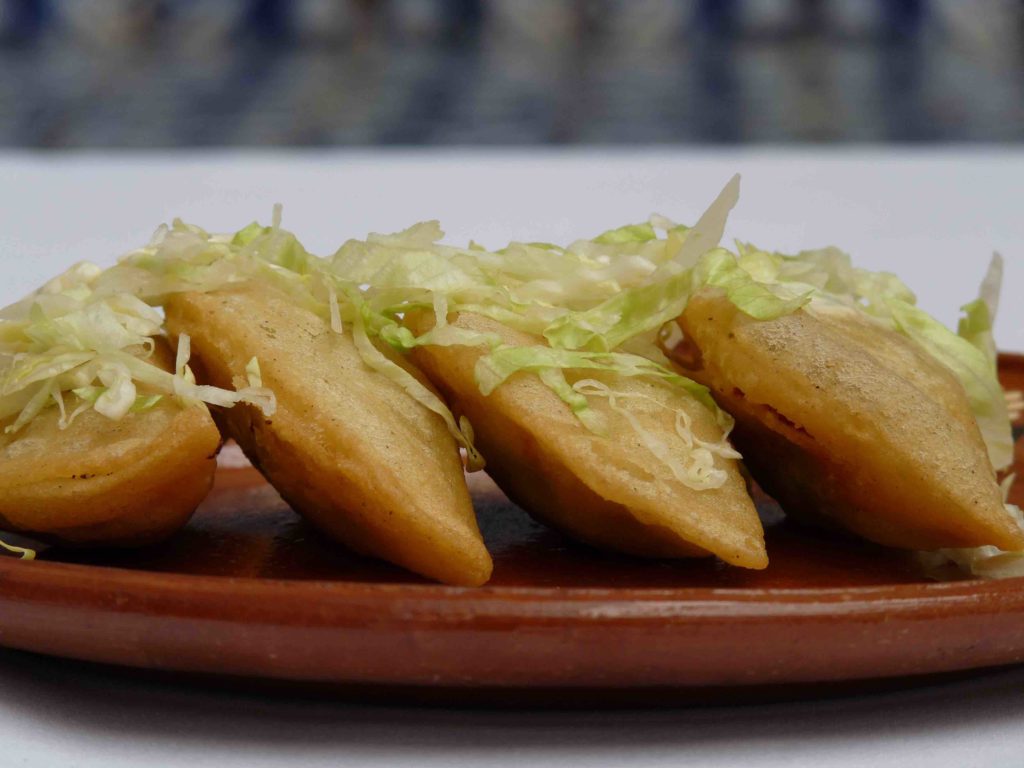 Whichever way you decide to make them, with fresh corn masa or already cooked tortillas, the wholesome and tasty filling full of personality is bound to make you happy. I am sure the clairvoyant bird would agree…